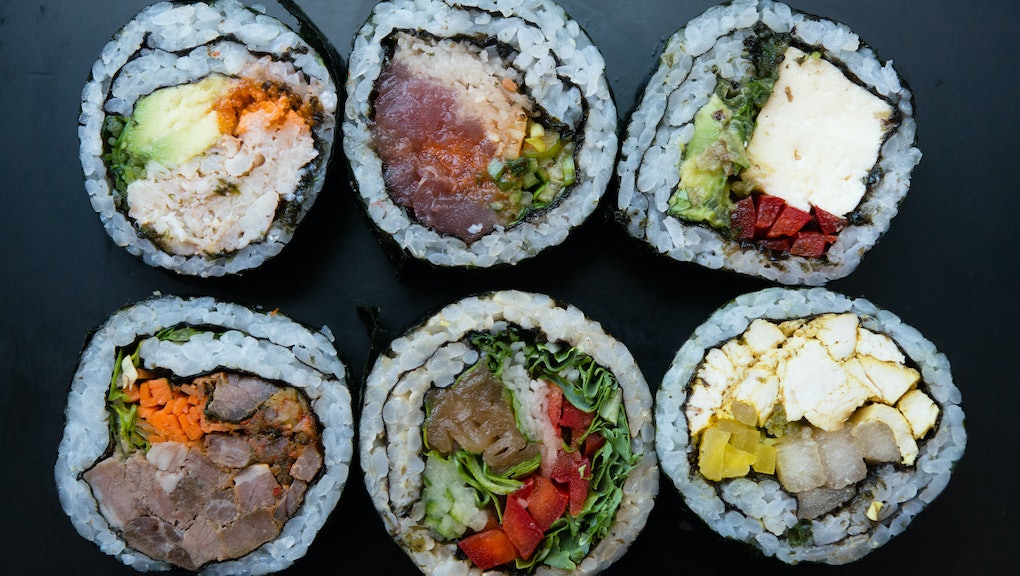 How Much Sushi Is Too Much? Here's Why You Probably Shouldn't Fear Mercury Poisoning

Spicy tuna, saba, rainbow rolls. There's an endless variety of sushi to choose from. Fish is usually deemed a healthy choice, and is scientifically proven to be brain food that can lower signs of Alzheimer's, Forbes reported. However, noshing down on sushi more than six times a week can increase someone's methylmercury levels, leading to poisoning, according to CNN.

Almost every fish contains methylmercury, according to the Food and Drug Administration. Mercury finds its way into rivers and oceans through both natural means and via air pollution. Mercury then enters the aquatic food chain by falling from the air, and micro-organisms in the water transforms this mercury into methylmercury, a toxic form of inorganic mercury. It's the big whopping fish that are most dangerous, since their levels have accumulated with growth and longer age. The fish with the highest levels of mercury (containing more than 0.5 parts per million) are bigeye tuna, yellowfin tuna, swordfish and king mackerel, according to the Natural Resources Defense Council. And if the fish swam in polluted waters, its mercury levels are even higher, and may contain other contaminants.

Too much of the highly toxic methylmercury can mess with someone's neurological functions, leading to a lack of coordination, headaches and vision impairment. People can also experience insomnia and emotional changes, such as mood swings or irritability.

Pregnant women and children 12 years old or younger are the most at risk for mercury poisoning, according to Medical Daily. The FDA recommends pregnant women to eat a variety of fish and shellfish, up to 12 ounces or two meals per week, that are low in mercury. The fish with the least mercury (with less than 0.09 parts per million) are salmon, shrimp, scallops and North Atlantic or chub mackerel, according to the NRDC.

High mercury levels have also been linked to heart disease, as it can trigger the enzyme that can cause plaque buildup in the blood vessels, Medical Daily reported. Eventually, the blood vessel linings are damaged, which can lead to vascular problems.

But one week's consumption does not greatly affect the body's mercury levels, so someone who went overboard last week should just "cut back the next week or two," MSNBC reported.

Other than mercury, raw fish can contain contaminants such as dioxins and polychlorinated biphenyls, which have been shown to be carcinogenic. But a study published in January found fish pollutants and toxins to have decreased from 1969 to 2012. This decrease in toxins applies to the United States and its relatively stringent limits placed on contaminants. However, fish from Asia tend to be high in antibiotics and contaminants, and often slip through FDA inspections, KCBS reported.

Those suspected to be experiencing mercury poisoning can get their levels tested by a toxicologist, and unfortunately should go on a sushi hiatus, according to the Scientific American.