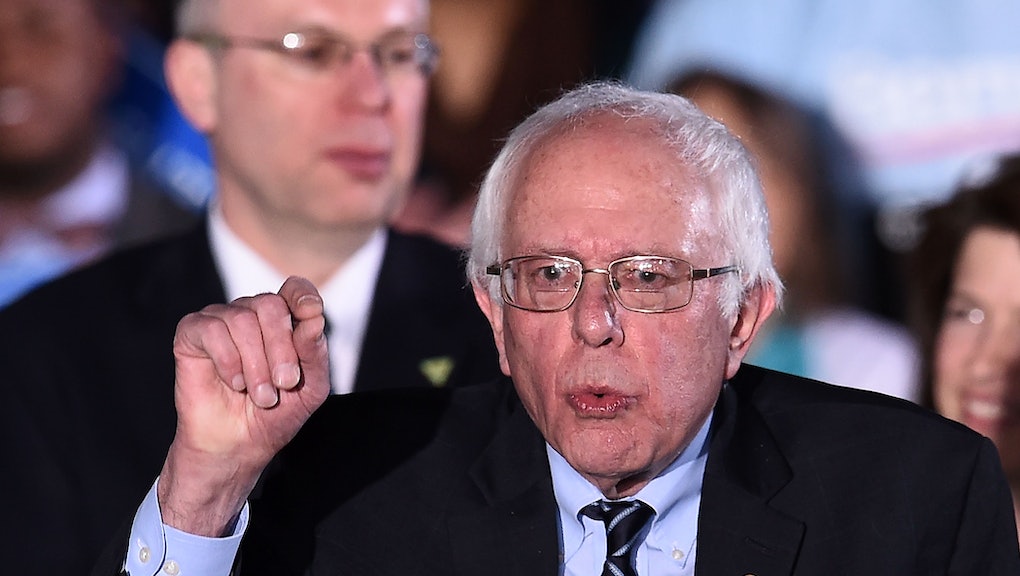 Bernie Sanders Is Taking Obama to Task on Immigrant Deportations

Democratic presidential hopeful Bernie Sanders, looking to make inroads with Hispanic voters as the Feb. 20 Nevada caucuses approach, is stepping up his criticism of the Obama administration's deportation policies, calling on the administration to end sweeping crackdowns in favor of a more targeted approach.

In a letter to Homeland Security Secretary Jeh Johnson, the Vermont senator and Rep. Raul Grijalva (D-Ariz.), who has endorsed Sanders, argue that federal authorities have failed to follow through on promises to prioritize undocumented immigrants deemed to pose threats to public safety.

The background: The letter comes in response to Sanders and Grijavla's concerns about the administration's Priority Enforcement Program, launched in November 2014 as a successor to the Secure Communities program, which came under fire from immigrant advocates as far too draconian in its systematic deportation of immigrants. A number of liberal cities refused to cooperate with the federal government in enforcing the program, a dynamic that helped spur the development of PEP.

More than one year after its retooling, though, Sanders and Grijalva said the administration's immigration enforcement program is still too harsh.

"We all share the goals of supporting local law enforcement's mission to promote community safety, and we are concerned that the SCOMM's failed policies continue unabated through PEP," the two wrote. "Unfortunately, it seems that since the release of the PEP Memorandum, DHS has not followed your instructions in letter or spirit."

They wrote that the Homeland Security department has made only "minor stylistic changes to detainer requests" in jurisdictions that opposed Secure Communities. Meanwhile, the Secure Communities program continues unabated with only a "new name" in other localities, Sanders and Grijalva allege.

Calling for enforcement of detainees' due process rights, the two lawmakers called for Homeland Security to ensure that the Immigration and Customs Enforcement agency follows through on the reforms Johnson laid out in 2014.

"As a country, we have a fundamental responsibility to keep families together and welcome those seeking refuge from extreme violence and persecution," Sanders wrote at the time.

Sanders has become increasingly outspoken on immigrant rights as he looks to cut into Democratic presidential rival Hillary Clinton's edge with Latino voters. Though Sanders nearly upset Clinton in the Iowa caucuses last week and defeated her resoundingly in the New Hampshire primary on Tuesday, the senator's hopes of securing the Democratic nomination hinge on whether he can grow his support in far more demographically diverse states.

In a January NBC News poll, Clinton bested Sanders 54% to 33% among Latino Democrats nationally. But in Nevada — a state where more than a quarter of the population is Latino — Sanders may well overtake Clinton. Polling of the state has been sparse — the last public survey of the state, released in December and before the race tightened elsewhere, gave Clinton a 23-point lead over Sanders. Yet Sanders is making a strong play for the state, aggressively advertising on the airwaves and opening 11 field offices to Clinton's seven. Sanders has also secured endorsements from key figures, including popular congressional candidate Lucy Flores and Democratic National Committee member Erin Bilbray.

A Sanders victory in Nevada would confirm that his New Hampshire victory was no mere fluke, and call into question the Clinton campaign's belief that it's erected a firewall in more diverse states. As Sanders' latest letter underscores, he's pulling out all the stops to score that momentum-building win.