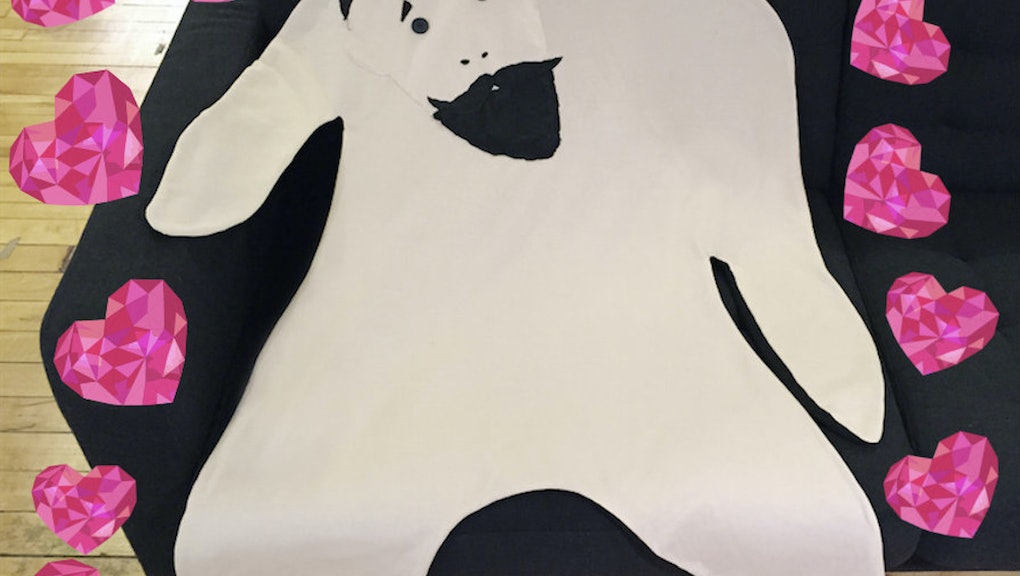 This Valentine's Day, you deserve some love. More specifically, you deserve some cuddles. You deserve comfort and warmth and the fuzzy feeling of undying affection. However, as we all know, sometimes there just isn't anyone around who can fully give that to us.

All that means is that you can get creative. Life is simply too short to mope around about the lack of a significant other or a casual sex partner or a BFF you're almost too close with. It's time to give yourself not only what you want, but deserve, and what you deserve is endless cuddling.

So Mic has some recommendations (and some illustrations) for you about Valentine's Day cuddling, because who needs humans anyway?

This man who has been melted down into a blanket

Have you ever laid down on the couch, tightly wrapped yourself in a blanket, looked down and thought, "You know what this blanket needs? A face!" Well, OK, even if you haven't, now that terrifying thought has come to life.

For $150 Canadian dollars, you can buy yourself a "Manket," which looks like a melted down bearded male person. Is it terrifying? Yes. Is it bizarre? Totally. But does it have the ability to keep you warm and snuggly all night long? Oh, you know it does.

On the Manket website, the description reads: "Beckoning you with his disproportionately large arms, he knows just what you need to fill the endless pit of loneliness and despair inside you." And you know what's sad? That is an extremely tempting proposition, and they're probably not wrong!

Anyway, this is like a flat, lifeless boyfriend that keeps you warm, so it's basically your ex.

This isn't even one of those items we want. This is an item we need.

As The Cut reported, this body pillow — with an almost life-size image of Idris Elba — is totally real and necessary. Thought up by the geniuses at Izzy and Liv, the pillow has an image of a shirtless Elba on one side, and the other of him in a striking striped shirt. It's like one side is when he meets your mother, and the other is when he takes you home with him.

The only thing we need more is for it to speak to us in a British accent.

Every year on V-Day, couples dish out at least $40 on a fancy-schmancy dinner. They go to Olive Garden and get some chicken Alfredo, or, if they're doing it correctly, they go to Red Lobster. But spending money on things with other people is dumb, so how about you take the money you would have spent on a significant other, put it in a huge fucking sack and just cuddle it? Wrap your arms around it, take a deep breath and feel that wave of pleasure wash over you.

Let's be real: Chicken Alfredo is gross as hell and not worthy of you.

The entirety of Beyoncé's new merchandise

Speaking of Beyoncé, the keeper of all that is good in this world, the Queen was keen enough to drop a few new items of merchandise before V-Day this year. Among the new swag items are a few shirts , a tote bag with "I got hot sauce in my bag" and a hat that says "Hot sauce."

So because all we really want to do is feel her presence around us always and forever, how about you buy every new item, turn on an episode of Luther, and just hold it in your arms? Hold it tight, like Bey definitely holds Blue Ivy. In total, the new items cost more than $200, so it's especially precious.

When he fuck me good, I take his ass to Red Lobster, and I make him buy me that hot sauce hat, ya feel?

French fries that are soft, cuddly and not at all messy

With the money saved on real food, you could also by some stuffed food. No, not like stuffed peppers. Legit stuffed animals, but instead of animals, they're your favorite foods! Thanks to Kidrobot, for about $30, you can purchase your own plush pizza, cotton candy and even sushi. The French fries look especially cheery, plus they have their very own ketchup pal.

A few hundred of these men, who happened to be made of chocolate

This may turn into a sticky, melted, chocolate disaster, but we wouldn't fault you for trying. For $8, you can get yourself a chocolate man. But you know what's better than one chocolate man? 100 chocolate men, then melting them down and then sculpting yourself a fully-formed chocolate man.

Is this possible? Probably not, but it's the idea that counts. In any case, look at his cute boxers and bite his head off. (P.S. There are no chocolate women available, because sexism.)

A really, really big fluffy dog who loves you unconditionally

Let's talk about what we really want and deserve on V-Day. We want a very large dog (Saint Bernards or Newfoundlands are preferred), and we want to lay down with it and cuddle it until all of our sorrows and worries have evaporated from our worried little heads. Dogs are better than people for many reasons, but the most important ones are that they do not speak and they are cute as hell. Nothing else really matters.

That's it. That's all, folks. That is both what we want, need and deserve.