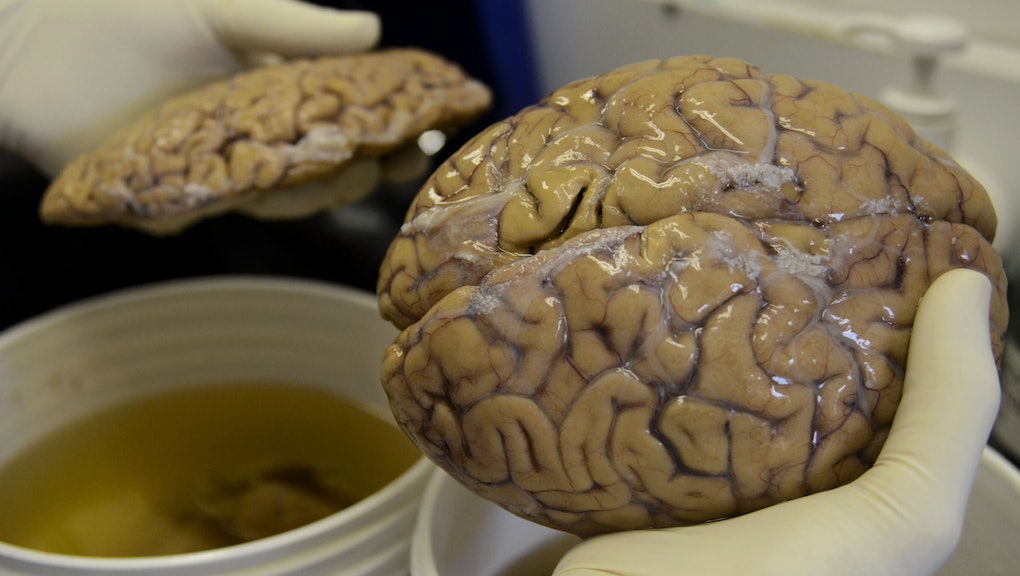 If Bugs Bunny were to ask his famous question, "What's up, Doc?" today, he might not like the answer.

On Tuesday, the Brain Preservation Foundation announced the winner of its Small Mammal Prize, which challenged participants to preserve a small mammalian brain to such a degree that all of its neurons and synapses are "intact and visible" when examined with an electron microscope.

The team, led by recent Massachusetts Institute of Technology graduate Robert McIntyre, used a potent chemical called glutaraldehyde to stabilize the rabbit's brain matter and tissue. Because it travels so quickly through the brain, the substance prevents decay and and keeps valuable proteins in place. Immediately after injecting the chemical, the team froze and stored the brain at -135 degrees celsius.

When examined by the foundation's judges, the entire brain was found to be in near-perfect condition — a feat that had never been seen before.

"Every neuron and synapse looks beautifully preserved across the entire brain," Kenneth Hayworth, the Brain Preservation Foundation president, said in the foundation's statement. "Simply amazing given that I held in my hand this very same brain when it was vitrified glassy solid ... This is not your father's cryonics."

"This is not your father's cryonics."

The discovery is important for more than just rabbits: It could also pave the way for human brain preservation.

As Newsweek points out, our current techniques for preserving human brains aren't ideal — they lead to dehydration and the destruction of neural connections, which means the brains can't be revived in the future.

McIntyre's rabbit brain can't be revived yet, either, but the fact that its neural connections and synapses can be preserved is an important step. He hopes that one day we may be able to take the information stored within the preserved brain and transfer them to another source — a working brain, perhaps.

"We know that it can be stored for centuries and not decay," McIntyre told Popular Science. If technological advances go far enough, we may just be able to save the memories and learned information for the future. It's not the fully realized cryonic dream, but it does appear to get us closer.

"This result directly answers a main skeptical and scientific criticism against cryonics — that it does not provably preserve the delicate synaptic circuitry of the brain," wrote the Brain Preservation Foundation in its statement. (In some parts of the world, the field of cryonics is not looked upon kindly.)

Taking the discovery to its very last step, of course, means wondering whether we will one day be able to bring people — or their brains, at least — back from the dead. While Walt Disney enthusiasts may salivate over this prospect, we're still a long way off.

But for now, according to McIntyre, preservation is the next best thing.

"The timeline of this is not written in stone," he told Popular Science. "In an ideal world, we would envision a future, where if you are facing end of life, you could have your brain preserved at this level of detail."