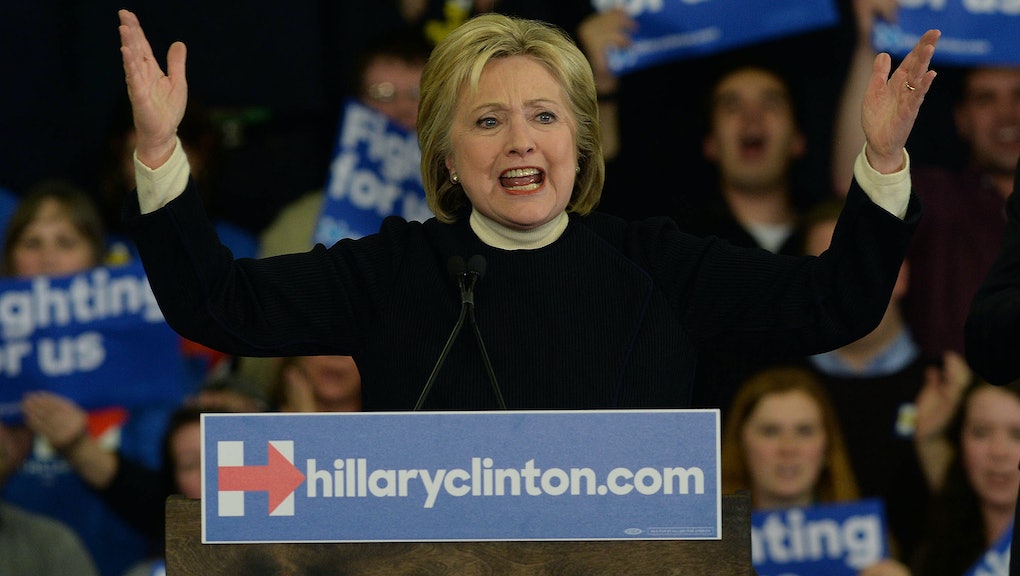 Still nursing the wounds of a landslide loss in Tuesday's New Hampshire primary, Hillary Clinton's campaign for the Democratic presidential nomination received a much-needed boost on Thursday with the endorsement of the Congressional Black Caucus' political action committee. The endorsement could hinder challenger Bernie Sanders' efforts to make inroads with African-American voters ahead of crucial primaries in larger, more demographically diverse states.

Appearing at a Washington, D.C., press conference to discuss the endorsement, members of the CBC depicted Clinton as a staunch ally of the black community, while calling into question the depth of Sanders' commitment to black voters' concerns.

"There is no question in my mind and in our mind that one single candidate — one — possesses the qualifications, experience and temperament to be the next president of the United States, and that person is none other than Secretary Hillary Rodham Clinton," Rep. G. K. Butterfield (D-N.C.), the chair of the CBC, proclaimed.

Echoing critiques emanating from the Clinton campaign, Butterfield argued that Sanders' ambitious policy proposals were untethered from political reality, while Clinton's experience equipped her with the tools to make progress on racial justice issues.

But the toughest words for Sanders came from Rep. John Lewis (D-Ga.), a hero of the civil rights movement who was brutally beaten by Alabama state troopers as he marched for voting rights on the Edmund Pettus Bridge in Selma in 1965. Sanders was also a civil rights activist at the time, attending the March on Washington in 1963 and organizing for desegregated housing at the University of Chicago. But Lewis cast doubt on just how much of an ally Sanders has been.

"I never saw him. I never met him. I was chair of the Student Nonviolent Coordinating Committee for three years. ... But I met Hillary Clinton. I met President [Bill] Clinton," the congressman said.

In a statement accepting the CBC PAC's endorsement, Clinton emphasized her desire to safeguard the legacy of President Barack Obama, who remains overwhelmingly popular with black voters, and suggested that legacy was in jeopardy should Democrats not nominate her.

"The CBC PAC knows we need to elect a president who can take on all parts of the job and build on the progress we've made under President Obama — not let it get ripped away," Clinton said. "The stakes in this election couldn't be higher. African-Americans can't wait for solutions — they need results now. We need a president who can stand up to the Republicans and win," she added.

Not ceding the fight: But if the CBC PAC's Clinton endorsement highlighted her longstanding ties to many leaders in the African-American community — and spoke volumes about the improvement in those relationships since her bruising 2008 primary battle against Obama — Sanders is working assiduously to court black voters.

He's already nabbed the endorsement of Rep. Keith Ellison (D-Minn.), a CBC member who tweeted on Thursday that the PAC's endorsement came without input from the caucus membership:

In South Carolina, which holds its Democratic primary on Feb. 27 and whose Democratic primary electorate was 55% black in 2008, Sanders recently wooed black state Rep. Justin Bamberg over from the Clinton camp. Bamberg is also the lawyer for the family of Walter Scott, an unarmed African-American shot and killed by a North Charleston police officer last year.

In a meeting that raised eyebrows, Sanders had breakfast on Wednesday with the Rev. Al Sharpton, longtime civil rights activist and commentator. Sharpton told Mic after the meeting that he remains undecided in the race, but he wants to hear more from Sanders on racial inequality.

Seeking to reassemble the coalition that propelled Obama to victory, Clinton focused early on courting black voters, devoting the first policy speech of her campaign to criminal justice reform and decrying "the era of mass incarceration."

Sanders, who has spent the bulk of his public life focused on economic inequality, encountered criticism from activists who argued he put too little emphasis on the unique woes confronting the African-American community. The senator has since unveiled a racial equality agenda proposing community-based policing, the demilitarization of police forces and a halt to mandatory minimum sentences, which disproportionately hit minorities. He has also married his economic populist pitch to his call for racial justice, regularly noting that unemployment rates remain much higher for African-Americans and Latinos than for whites.

Still, poll numbers suggest Clinton has an overwhelming advantage with blacks. An NBC News/Wall Street Journal/Marist poll of South Carolina in January found her with a 74% to 17% lead among African-Americans likely to vote in the Democratic primary.

Whether Sanders' near-win in Iowa and his landslide in New Hampshire have prompted black voters to give him a second look will become clear in the coming days, as the first post-New Hampshire polls of the Palmetto State roll out.