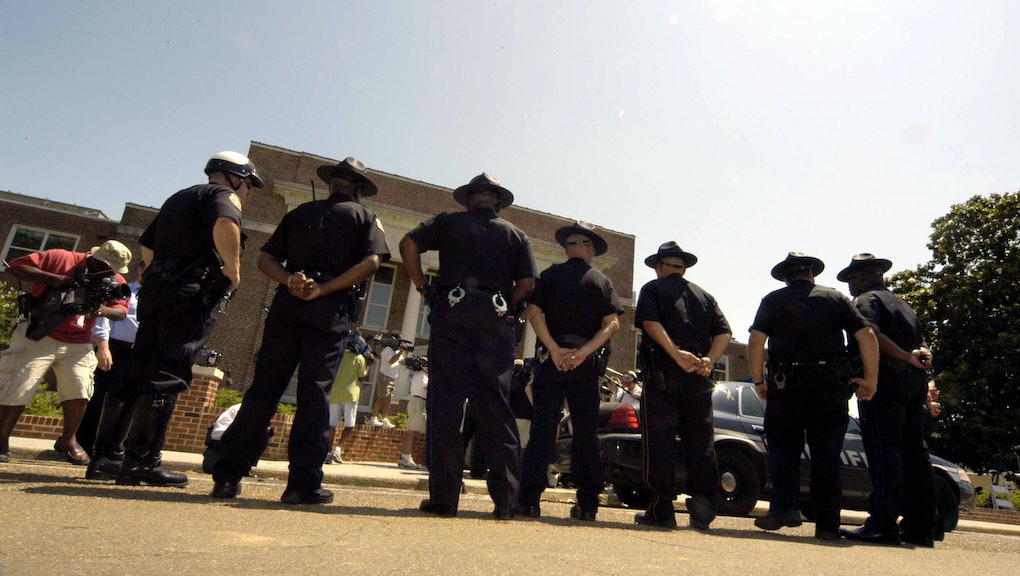 A white former police officer in Mississippi is suing his old department because — wait for it — he said he was a victim of racial discrimination because he got fired after killing a black man.

The Guardian reported that Canyon Boykin filed a seven-page complaint against the Columbus Police Department, which stated his 14th Amendment rights were violated and that he was fired after the shooting because "he is white and the deceased was black."

You can't make this stuff up.

Boykin's victim was Ricky Ball, 26, who allegedly fled Boykin and two other officers after being pulled over in his car in October. Columbus police say Ball evaded officers for 20 minutes and had suspected narcotics and a handgun on his person at the time.

But take that with a grain of salt: Columbus police have now released two separate versions of the shooting report, and have not made any public statement to explain why they are different. One report says Boykin used a stun gun on Ball before killing him, while the second report makes no mention of a gun at all, according to the Guardian.

Since the shooting, the former chief of police and several other officers have quit their jobs at the department. None have been directly linked to the shooting.

Meanwhile, the official reasons given for Boykin's dismissal are threefold: that he violated department policy by failing to turn on his body camera before shooting Ball, that he allowed his girlfriend to ride in his patrol car with him and that he posted messages on Instagram that used derogatory terms for black people.

Boykin addressed the latter allegation in his suit, saying he cannot be racist because he dove into a freezing lake one time to save a black criminal suspect. He also said he tried to resign before he was fired, but that his resignation was not accepted.

This marks the second time in recent months when a police officer has filed a lawsuit in the U.S. after killing a black man. The other time was in Chicago in January, where Officer Robert Rialmo announced he would sue the estate of a black teenager he killed in December.

Rialmo's suit claims that Quintonio LeGrier, 19, caused him emotional distress by approaching him with a baseball bat and prompting him to open fire. The shot that killed LeGrier also hit and killed 55-year-old Bettie Jones, a mother of five, who came to her door to see what was happening.