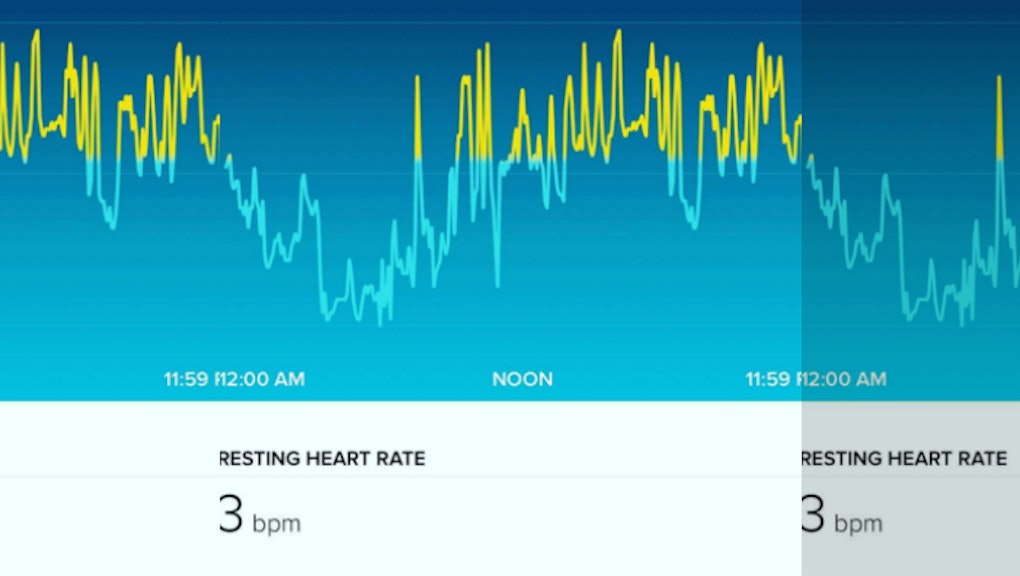 If your Fitbit could talk, you'd probably be fairly surprised if it was all, "Hey! Hi. So, uh, surprise! You're pregnant." And yet, such was the case for the wife of a Redditor who found out she was with child thanks to data from the fitness-tracking device.

Mashable reports that David Trinidad, who goes by the name YoungPTone on Reddit, recently discovered that his wife Ivonne was pregnant after looking at some out-of-the-ordinary Fitbit data.

"[The Fitbit] is showing her heartbeat being consistently high over the last few days," he wrote. "Two days ago, a somewhat normal day, she logged 10 hours in the fat burning zone, which I would think to be impossible based on her activity level."

After a fellow Redditor asked if maybe she was pregnant (because women's heart rates typically increase from 30 to 50% during pregnancy), Trinidad accompanied Ivonne to the doctor. And it was there that the doctor co-signed on the medical opinions of a wearable fitness device and a stranger on Reddit, and said that yes, Ivonne was pregnant.

"We've been married for a few years now, and one of our plans for 2016 was to hopefully start a family," Trinidad told Mashable. "But the big surprise was that it happened so soon, and of course, that the Fitbit helped us to figure it out." (Mic has reached out to Trinidad for further comment and will update if we hear back.)

Now that they are about to embark on the journey of parenthood, the couple plans to document the pregnancy on their new baby-centric Instagram.

So what else might a Fitbit inadvertently tell you about your health? Well, the American Heart Association reports that heart rate can be increased by any number of factors, including high air temperature, body position or medication use. So if you start to see sudden spikes for no reason, it may just be because your roommate has the heat on too high and not because you're actually prego.

Or it could be that you accidentally kept the Fitbit on during sex — like this woman who did so last year and saw a number of heart rate spikes during her steamy, eight-minute session.

Either way, David and Ivonne's "we found out about our baby via a Fitbit/Reddit combo" story is just the latest in a rich tradition of women not knowing they're pregnant until a thing happens that makes them realize they're pregnant. Sometimes, that thing could even be labor itself — as one New Zealand couple found out last December.

If only they had been Fitbit users, perhaps they would have had more of a head's up of their baby's arrival, amirite?