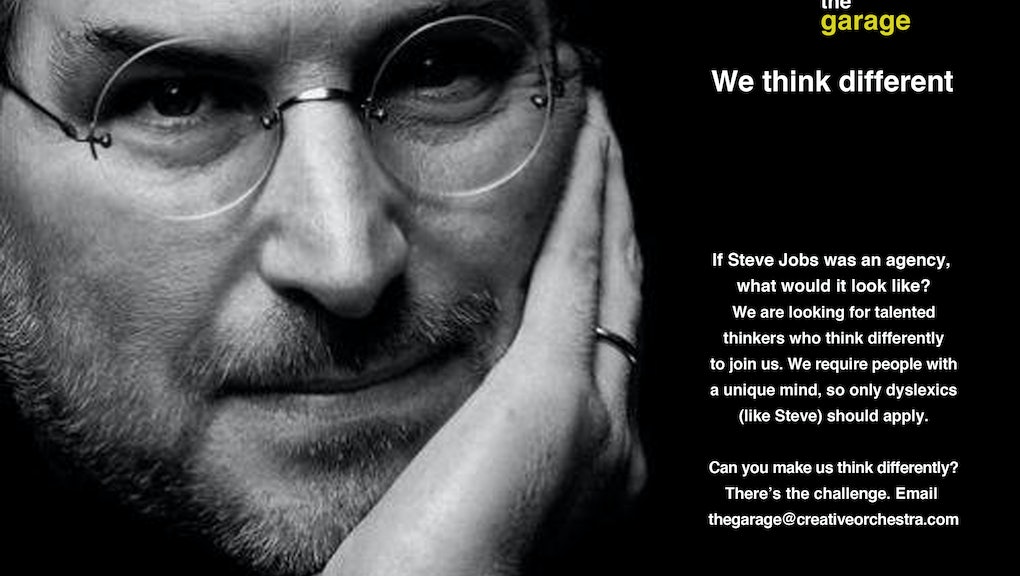 So maybe that explains why one advertising firm posted a job opening available only to those with the learning disability.

"We require people with a unique mind, so only dyslexics (like Steve [Jobs]) should apply," the U.K.-based agency Creative Orchestra wrote in an ad, featuring a portrait of the late Apple cofounder and CEO.

In a press release sent out in conjunction with the ad, the company's creative partner, Chris Arnold, described himself as a "dyslexic entrepreneur."

"It's no coincidence that dyslexics become successful entrepreneurs, inventors, artists, actors and even ad men," Arnold wrote. "The way they think gives them a massive advantage over ordinary people because their brains are wired in a different way."

There has been an increasingly vocal contingent of people who argue that the learning disorder, in fact, comes with tremendous benefits. People with dyslexia, forced to function within an educational system that's not designed for their way of learning, are often required to take creative detours to solve problems.

Award-winning novelist Sally Gardner championed this concept in a story for the Guardian about her own dyslexia:

"Dyslexia is not a disability — it's a gift. It means that I, and many other dyslexic thinkers can portray the world through images because we think in images."