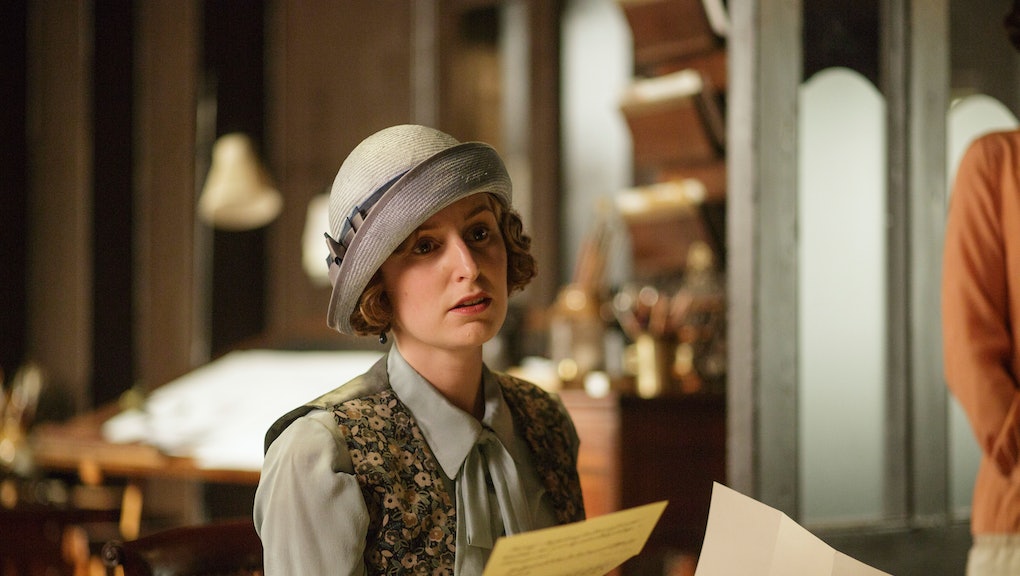 'Downton Abbey' Season 6 Episode 7 Recap: It All Goes Up in Smoke

On episode seven of Downton Abbey's sixth and final season, the Granthams are off to the races — specifically, to the racetrack at Brooklands, where they will observe Lady Mary's love interest, Henry Talbot, in his natural habitat and judge him as they've never judged before. In the family's absence, the servants get to stretch their legs and flex their mind muscles; Mrs. Hughes deals with her Mr. Carson problem once and for all; and lives are changed — for better and for worse. Here's everything that happened on Sunday's episode of Downton Abbey.

Everyone's a critic. In an effort to get in with the family, Henry Talbot invites the entire gang to watch him race cars, an invitation the bored-stiff Lord Grantham jumps all over.

Cora, however, questions whether or not her daughter could ever be content with the only reasonably well-off Talbot. Ever the embarrassing dad, Lord Grantham speculates that "sex appeal" could be behind his daughter's fascination, but admits he thought her more sensible than that.

The parental view of Talbot seems to be the prevailing opinion, amongst everyone but the man's biggest champion, Tom Branson. Still, Talbot isn't going to let a pesky thing like the family's moderate disdain for his social standing get in the way of this beautiful union.

On the eve of the race, as the family is dining in Mary's Aunt Rosamund's London home, Talbot crashes dinner, coming in hot with the husbandly aspirations. When Mary tells him that his swinging round, uninvited, casually in a tux is "a bit obvious," he responds with an earnestness that manages to be dashing somehow.

"I hope it is obvious — obvious that I want to be a part of this family," Talbot says.

"I want to surround you with people murmuring, 'isn't he divine,' or, 'you'd be mad to let him go,'" Talbot answers without answering or, really, addressing his intended's question. (An implicit no.) But at the bottom of things, Mary doesn't mind that Talbot semi-ambushed her with a fun-for-the-whole-family date. "I'm here, aren't I?" she says when he wonders aloud if the move was a little much. He can hardly contain his excitement.

Edith's new editor brings out the modern in Lord Grantham: While the family's in London, Edith swings by the office and invites her newly hired editor, Laura Edmunds to Brooklands. When she arrives, Tom is pretty obviously taken with her, as is Lord Grantham. When asked if it's difficult, being a woman editor, Edmunds replies, "It's hard to be a woman anything that isn't domestic, but I do my best." Lord Grantham declares her efforts "courageous and good," while Tom takes the opportunity to underline the common ground he and this brainy beauty share.

"You're not the only one around here who's broken a few barriers," he tells her as the two sidle up to the buffet. "I started my life at Downton Abbey as the chauffeur," and I'd like to end it as your husband, he continues inside his head.

But everything is derailed by a fiery crash: The day is off to a fine start, with Lord Grantham jazzed about his future son-in-law and Mary feeling comfortable enough around him to admit that her extreme anxiety about watching so many speeding cars has left her constipated. (Recall: her first husband, Matthew Crawley, died in a car accident.) She says her "digestive system has backed up completely," which is more eloquent, but only just.

As the main event begins and the drivers hop into their cars, the crowd goes wild. Except for Mary, who compares watching the race to being "trapped in some witch's curse for all eternity." The sentiment is made all the more dramatic as a cloud of smoke puffs up over the stands the second the words escape her lips.

There's been a crash and Mary's mind, of course, immediately jumps to Talbot. She races down to the scene of the crash and can't see anyone under the flaming car. When asked to I.D. the victim, both Bertie Pelham (who, as Edith's main squeeze, is along for the ride) and Tom let entirely too many seconds go by before they tell Mary it wasn't Henry, but his good friend, Charlie Rogers.

Talbot is guilt ridden — but the wreck only strengthens his resolve to make Mary his wife, as soon as possible. He calls Mary that night, clutching at a glass of whiskey and also, all of his nuptial hopes/dreams.

"The truth is, I won't sleep until i know where we're headed," he tells Mary. "His death has made me realize we don't have a minute to waste, you and I. This is my carpe diem moment. I must seize the day."

But Mary, having previewed the constant fear that would be her life if she gave him her hand, breaks it off, saying she doesn't "want [him] to give up anything, except me."

Edith takes all Mary's lemons and fixes herself a cool glass of lemonade: While Mary suffers her heartbreak loudly in the front hall, Pelham and Edith get cozy on the couch. Pelham turns tragedy to his advantage and tells Edith he'd like to marry her — by admitting that he'd "like to be trapped" by her. Ah, romance.

Edith is all atwitter, which is a relief to Pelham, who thought he may have just offended her. "I'm thrilled, I'm delighted," she says. "I'm just rather surprised." Not offended that her fiancée to-maybe-be just called her a trap — more just worried about what he'll think when she reveals to him that she had a child out of wedlock.

Meanwhile, back on the ranch: It's test day for Daisy and Mr. Molesley, so the staffers who haven't been summoned to London with the family bring the scholarly pair a picnic lunch, which Barrow — who wasn't invited, per se, because no one likes him and he knows it — crashes. His presence, though, very nearly saves Andy from drowning in his embarrassing illiteracy secret. Nearly.

When prompted to read Daisy's test question out loud, Andy finds himself put on the spot. Barrow snatches the paper out of his hand, but can't salvage that awkward moment when Andy demonstrates that he couldn't read what it said. He tells his cohort that Mr. Barrow has been secretly teaching him how to read, but that he's "too stupid" to pick it up. "I'm a fool who knows nothing," he says, the picture of dejection. "I am nothing."

The school teacher, Mr. Dawes, assures him this isn't so and promises to succeed where other teachers have failed Andy. In so doing, he reminds Barrow just how irrelevant he is to everyone else's lives, not knowing just how deep his offhand words cut.

Oh, and both Daisy and Molesley pass. Molesley, whose test score suggests that he's smarter than a solid margin of Oxbridge grads, is offered a teaching gig, which he happily accepts.

"I never think I deserve anything," Molesley says to Daisy as they prepare to toast their success. "Perhaps I've been wrong all along." And on that note, the camera pans to sad Barrow, sitting alone at the long kitchen table in the background, realizing he's been wrong all along and deserves nothing.

Mrs. Hughes plots her revenge: At the very beginning of the episode, Daisy asks a complaining Mrs. Hughes if her husband, Mr. Carson, appreciates all she does for him and everyone. "Does any man?" she asks, rhetorically, because the women of the servant's hall all know the answer to that question is a resounding no.

Which is why Mrs. Patmore has devised a plan that announces to all that her genius is not limited to the culinary arts. Mrs. Hughes puts it into action while the family's away, enticing Carson with the meal that awaits him as the pair sneak a sit in the Grantham library.

"I hope you're ready for tonight," she teases. "For once we can eat when civilized people eat, so don't be late back."

"Are you sure you know how to cook it?" Carson asks snootily.

"Don't you worry," she smirks. "I've been through every detail with Mrs. Patmore."

Every detail of how to fake a convincing injury, that is. Mrs. Hughes returns home with a bandaged hand, telling her husband that she injured it at work. That means cooking duty lands with Carson, and boy is he flummoxed. Rushing around to get all the various components prepped and in the oven, trying to keep them warm, not letting them burn, Carson finds himself run ragged. He falls asleep over the apple crumble and nearly faints when he hears he'll have to do the dishes, too.

Carson can't take the heat and will likely stay out of the kitchen forever. After the lesson he's learned, he'll likely allow Mrs. Hughes to do the same. Or, at least, stop whining when the china isn't warm enough.

Granny gives her family the slip — because she knows how she gets when she's been wronged and thinks it better to "vent her rage" in solitude. She'll be traveling abroad until she cools off, but not without paying a confrontational visit to the meddling Miss Cruikshank first.

Waging war on behalf of Cousin Isobel, the Dowager Countess shows up at the home of Lord Merton's son, who put his foot down at the prospect of Isobel marrying Merton in season five. She sets about sniffing out the driving force behind Cruikshank's overtures of "friendship" — into which she injects more venom than the word has ever before seen — toward Mrs. Crawley.

"Larry Grey [the douchebag son of Lord Merton] has spoken to Mrs. Crawley in a manner that, in any other century, would have resulted in him being called out and shot," the Dowager reminds Miss Cruikshank, asking why she's turning on the charm and calling Isobel back. The ulterior motive? Cruikshank doesn't fancy playing sick nurse for her soon-to-be father in law and would love it if Mrs. Crawley were around to take over.

"You're a cool little miss, aren't you," Granny replies. "I should feel sorry for Larry, if I didn't dislike him so much."

"I shall forget you said that," Miss Cruikshank fires back. "But you should go now. Much more and we may feel awkward when we meet — which we are bound to do." Not if the Dowager has anything to say about it, though.

"I think not, Miss Cruikshank," she breathes icily. "Not if I see you first."

And then she vanishes, heading for the continent while her relations are out of town. That's not the only surprise she has for the family upon their return, though. She leaves a new labrador puppy for Lord Grantham, whose ageless wonder of a dog — Isis — passed away during the previous season. Lord G's face lights up like an actual Christmas tree.

What's up next week: Barrow reaches rock bottom? Mary mends fences with Henry Talbot? Edith finally tells Bertie Pelham (and Mary) the truth about Marigold? The situation between Cousin Isobel and Miss Cruikshank comes to fisticuffs? Tune in or return here for the full play-by-play.