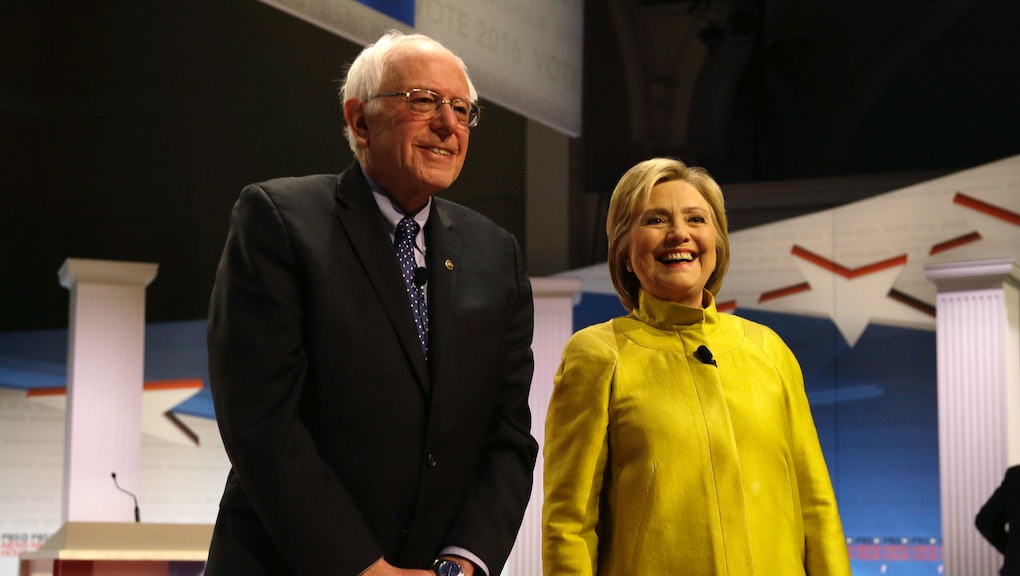 What Happened on Thursday Night's Democratic Debate Made Feminist History

The American public has undeniably come to equate politics with a sea of white, male faces. But Thursday night's Democratic debate was a welcome, and even historic, change to that status quo.

Hosted by PBS NewsHour's Gwen Ifill and Judy Woodruff, the Democratic debate was the first co-hosted by a female moderating team, and the first in which a white man was in the minority.

"We've had like 200 presidential primary debates," Hillary Clinton noted during the debate, according to ABC News. "And this is the first time there's been a majority of women on the stage. So you know, we'll take our progress wherever we can find it."

Women have previously moderated debates, but have done so only at the side of male co-moderators — like NPR correspondent Pauline Frederick, whose three male co-moderators asked every question during a 1976 debate — or facilitated audience questions, Time reported Thursday. CNN's Candy Crowley and ABC News' Martha Raddatz moderated debates in 2012, and Fox Business Network's Trish Regan and Sandra Smith co-moderated a Republican undercard debate in January.

The debate did not just offer unprecedented representation, but impressive substance as well. The candidates dug into the racism of mass incarceration and gendered dimensions of Social Security, for example.

But even so, a glaring omission was clear. Despite the earlier calls of NARAL and other abortion activists and allies to #AskAboutAbortion, the moderators failed to interrogate the candidates about how they plan to address increasingly dwindling abortion access — even though doing so would likely have been meaningful to the 21% of Americans say they will only vote for a candidate who shares their views on abortion, according to a 2015 Gallup poll.

This omission underscores an important point: Mere representation of women — whether at a debate or in the White House — doesn't equate to a substantive feminist agenda. It's a point Clinton made at the debate.

Ultimately, the candidate is less concerned with whether women specifically support her attempt to become the first female president than with their ability to make such a choice at all.

"I have spent my entire adult life working toward making sure that women are empowered to make their own choices," Clinton said. "Even if that choice is not to vote for me."