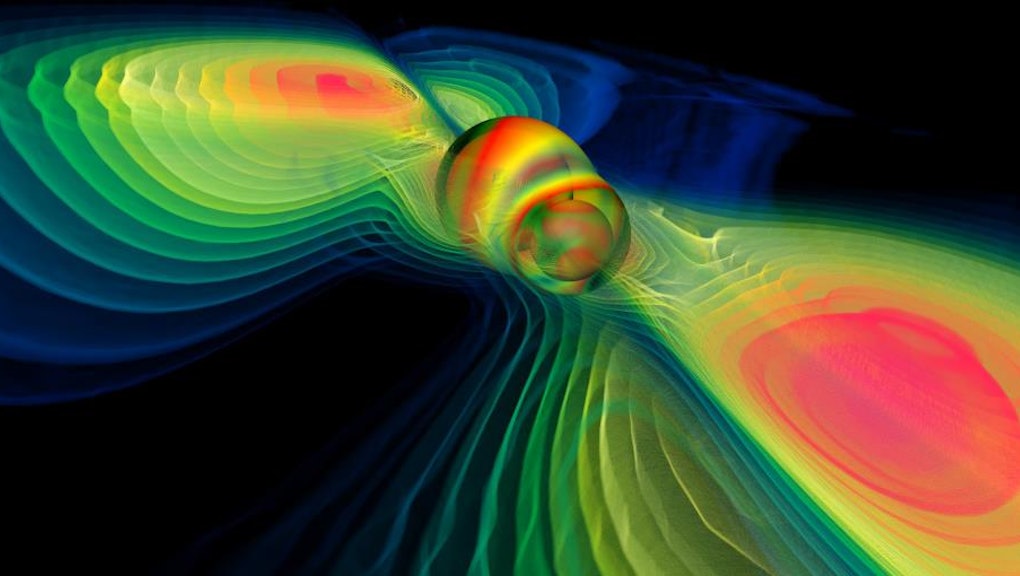 Citizens of the universe, hold on to your butts: Scientists just gained a whole new sense.

The team at the Laser Interferometer Gravitational-Wave Observatory, better known as LIGO, announced Thursday that they'd detected two black holes colliding deep in the blackness of space — finally proving the existence of gravitational waves, or ripples in the fabric of space-time, as physicist Albert Einstein theorized a century ago.

"This opens a window onto the universe," Gregg Harry, an assistant professor at American University who works at LIGO, told Mic, repeating LIGO co-founder Kit Thorne's sentiments during Thursday morning's press conference. "This is just the beginning. Observing the two black holes is amazing — but there are probably all kinds of things out there we can observe with this technology."

Measuring gravitational waves requires an enormous system. It involves a laser beam that gets split at a mirror, then sent 2 1/2 miles to another mirror at the end of an antenna arm and bounced back to its origin. It lets the LIGO team detect even an incredibly small disruption, because if the laser doesn't return to exactly where it started, it means something out there moved. And when that happens, it makes a sound — in this case, a short chirp.

Being able to prove one of Einstein's theories is already a big deal. It tells us the laws of physics apply the same way on Earth as they do elsewhere in the universe, which is a hard conclusion to draw without actually traveling there. But the further implications — we could be able to study gravity, something scientists don't fully understand — could lead to huge discoveries in the field.

What's more, according to Harry, LIGO's two Advanced LIGO detectors weren't even turned up all the way. "Advanced LIGO had just turned on when we made this detection," Harry told Mic. "The sensitivity level wasn't even at where we think we can get it. In a year or two, we'll be able to get it to the ultimate sensitivity, better by a factor of three."

That means the LIGO team could start seeing these events on a monthly or even weekly basis. "We look forward to seeing gravitational waves from other astronomical events like neutron stars or supernovas or even the Big Bang."

This opens up so many questions to explore. Where did black holes come from? Did they form in galaxies? Did they form outside of galaxies and then move in? How did they evolve to a situation where two could spin around each other?

"This is the exact kind of science we're hoping to know more about," Harry told Mic. "Black holes coming together: That was speculation before. Now we know it's real."

The situation leading up to the discovery is sort of a perfect storm. Not only was the newly switched-on tool extremely powerful — able to detect movement down to one one-thousandth of the diameter of a proton — but the amount of energy created by two massive objects, like black holes, colliding was enough to send these space-time ripples a billion light-years across the universe to our galactic front door.

Harry said this breakthrough probably won't change how we travel in space, besides the possibility of having a gravitational-wave version of the New Horizons space probe or Hubble Space Telescope. Basically, we'd have interstellar ears to go with our interstellar eyes.

Nor will this necessarily mean the discovery of extraterrestrial life, as UFO-watchers hoped. Though, after a gauntlet of caveats about the slim likelihood of discovering aliens, Harry offered, "It's certainly more plausible now because we've never looked in the gravitational wave world. And if that's where extraterrestrials were communicating, we wouldn't have known. It's unlikely, because we don't know if there is extraterrestrial life, but new technology always leads to new discoveries."

That's a big what-if. But think of how much of our life is dictated by gravity, and how little we really know about it — especially the farther away from Earth it occurs. Just like the way technology picks up steam with every new advancement, confirming gravitational waves could be the steam that gets us closer to understanding what's happening light-years, in every direction, from where we're standing right now.