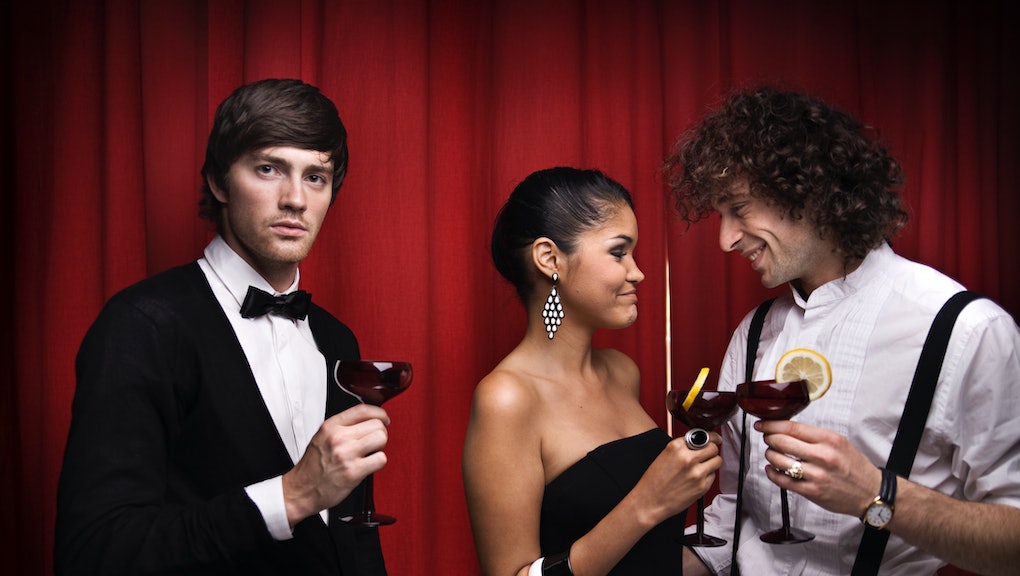 Why Are So Many Women Unwilling to Date Bisexual Guys?

Given the evidence that sexuality might be more fluid than we've all been conditioned to believe, it's only natural that we can't help but wonder: How would the average straight woman feel about dating a dude who might have a same-sex encounter or two under his belt?

Well, thanks to a new survey from Glamour, we now know that the answer to this question is "probably not great." According to the survey, 63% of women surveyed said that they would not be willing to date a guy who had a known history of hooking up with other dudes.

In a new survey on the subject of sexual fluidity, Glamour "asked 1,015 women ages 18 to 44 about their own sexual identities and experiences."

Lots of the women in the study were quite flexible, with 47% of them reporting that they've experienced same-sex attraction before. And 31% of them said that they've acted on that attraction, whether it was kissing another woman (93%), touching her breasts/genitals (85%), receiving oral (63%) or giving oral (55%). These results were mostly consistent with the major boom of female sexual fluidity we've seen as of late, with celebrities like Miley Cyrus and Cara Delevingne choosing not to label their sexualities, and more and more IRL women experimenting with each other.

But now for the double standard: Even though so many women reported experimenting with other women, 63% said that they would not want to date a guy who had hooked up with another dude. Cornell University sexuality professor Ritch C. Savin-Williams told Glamour that this statistic "suggests that these women hold on to the view that while women occupy a wide spectrum of sexuality, men are either gay or straight."

Damn you, toxic masculinity! Cock-blocking sexually curious guys from acting on any potential gay desires due to the crippling fear of being rejected by both society and potential wives. As per usual.

While these results indicate a double standard in how we view male sexuality versus female sexuality, they're not exactly shocking. Even if sexual fluidity is indeed becoming more culturally accepted, thanks to deeply ingrained societal homophobia, hooking up with another dude is still typically seen as one of the least macho things a guy can do.

Joe Kort, therapist and author of Is My Husband Gay, Straight, or Bi? told Mic that he is "not surprised at all" by this study's results, and that it serves as an example of how such rigid interpretations of male sexual orientation need to be challenged.

"Just because a man has sex or sexual interest in another man, [it] doesn't [say] anything about his sexual orientation," he said.

Indeed, many researchers believe that female sexuality is inherently more fluid than that of men, with one study determining that most women's libidos are aroused by both same-sex and heterosexual stimuli, regardless of how they self-identified. It's also worth noting that because we live in a patriarchal society that deems girl-on-girl action hot and appealing, female bisexuality comes with something of an implicit seal of approval.

"The idea of a man wanting to be with another man sexually, turns me off. It's really that simple."

In a world where many of us cling to our self-perceptions as progressive and judgment-free non-bigots, the sexual fluidity double standard is something of an inconvenient truth. It displays just how deeply conventional gender expectations and misogyny have been embedded in our psyches and personal preferences/turn-ons, even if we're not outwardly trying to discriminate.

A Reddit thread from a couple years ago featured women frankly discussing this topic. While some were more open-minded than those polled in the Glamour survey, others said they were simply turned off by the idea of dating a bisexual or sexually fluid man.

"The idea of a man wanting to be with another man sexually, turns me off. It's really that simple," wrote one.

"The thought of a man wanting to have sex with another man is frightening because it isn't considered masculine and women crave masculine men," wrote another. "It is ridiculously homophobic and sexist but it's the truth, sadly."

Is it possible to change this? Who knows. But for now, uh, sorry, straight guys! Looks like you'll just have to keep getting your bro-jobs on the down low.