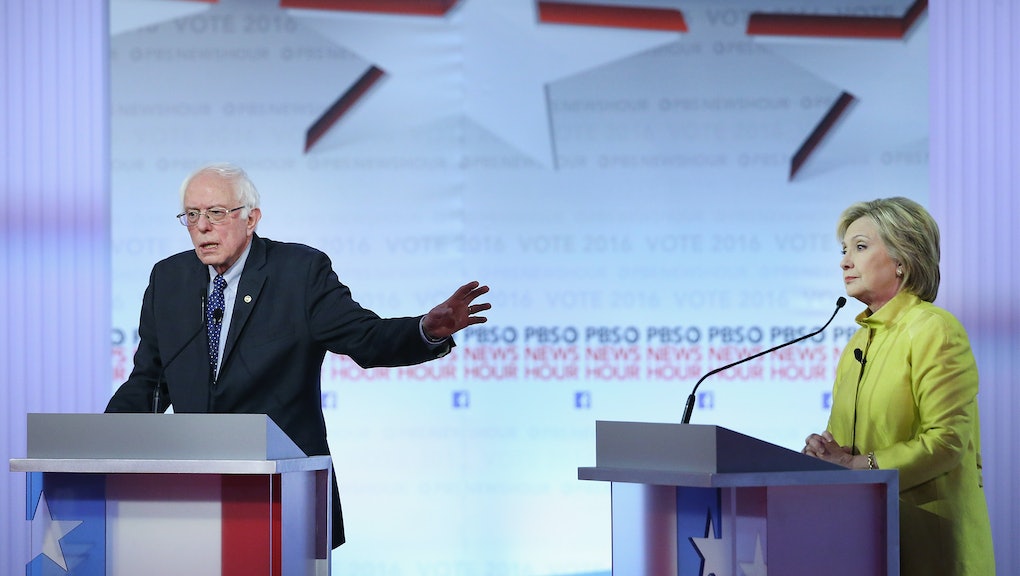 That has been the key framing of arguments over foreign policy in the Democratic presidential debates between Hillary Clinton and Sen. Bernie Sanders. In each of their encounters, Clinton has emphasized her experience as secretary of state to run circles around Sanders while discussing Middle Eastern geopolitics, while Sanders has continuously pointed to Clinton's vote to authorize the Iraq War as evidence that her judgment on foreign policy is suspect.

In the sixth Democratic presidential debate on Thursday evening, this dynamic was on display yet again, but with an added wrinkle. Sanders brought up a new and useful distinction between Clinton and himself that in some ways cuts deeper than their differences over Iraq: whose advice do they seek on matters of foreign policy?

Sanders slammed Clinton for boasting about praise she has received from former secretary of state Henry Kissinger, a diplomat famous for his machiavellian Cold War politicking that resulted in the United States openly backing or acting in complicity with brutal and even genocidal regimes in the 20th century.

"In her book and in this last debate, she talked about getting the approval or the support or the mentoring of Henry Kissinger," Sanders said. "Now, I found it rather amazing, because I happen to believe that Henry Kissinger was one of the most destructive secretaries of state in the modern history of this country."

For any Democrat, Clinton's warm relationship with Kissinger, which includes seeking his advice on significant policy decisions, should give serious pause — his notoriously unscrupulous worldview is at odds with her self-proclaimed title of "progressive."

Who is Henry Kissinger?

Kissinger is one of the most influential figures in the history of modern American diplomacy. He's been a scholar, served as national security adviser under Richard Nixon and secretary of state under Nixon and Gerald Ford.

Among the foreign policy establishment, Kissinger, now 92, is still widely respected for his mastery of statecraft, and his extensive knowledge of the power dynamics that underlie the ever-shifting global arena. He's also known for subscribing to an especially cold version of the "realist" school of thought that holds that actors in the international arena are driven by self-interest, and that sound foreign policy, whether regarding decisions on cooperation or conflict, should be informed by calculations about competition for power and resources rather than moral or ideological agendas.

Kissinger's worldview led him to push for some truly brutal policies. The most famous example surrounds a bombing campaign he helped engineer against targets in Cambodia beginning in 1969 in the height of the Vietnam War. Sanders made reference to this in the debate: "Kissinger's actions in Cambodia, when the United States bombed that country  ... created the instability for Pol Pot and the Khmer Rouge to come in, who then butchered some 3 million innocent people — one of the worst genocides in the history of the world," Sanders said. According to New York University historian Greg Grandin, who recently wrote a book on the legacy of Kissinger, Sanders' characterization was "pretty much right."

The total casualties that can be traced back to Kissinger's policies could be upwards of 4 million people.

Kissinger's bombing campaign in the country caused untold amounts of loss of civilian life and property, devastated its economy, and directly empowered and accelerated the rise of the Khmer Rouge, the regime that unleashed genocide on the Cambodian people. The bombing campaign, which Kissinger attempted to keep secret, killed an estimated 100,000 civilians, and the subsequent genocide killed roughly 1.7 million people. That's lower than Sanders' 3 million casualty estimate, but that doesn't undermine the substance of his point.

Cambodia is just one of many places where Kissinger bloodied his hands. He spearheaded the destabilization of the government of the democratically elected socialist president of Chile, Salvador Allende, and was connected to the military coup that took Allende down in 1973. Allende's U.S.-backed successor, Gen. Augusto Pinochet, oversaw a wildly repressive authoritarian regime that killed, tortured and disappeared thousands of people. Kissinger was happy. "In the United States, as you know, we are sympathetic with what you are trying to do here," he told Pinochet in 1976. "We want to help, not undermine you. You did a great service to the West in overthrowing Allende."

Kissinger's list of unsavory deeds is endless. He played a key role in extending the length of the Vietnam War, helped encourage Pakistan's intelligence services to destabilize Afghanistan through the cultivation of radical Islamism, backed Indonesia's ruthless occupation of East Timor, got the U.S. involved in a number of interventions in bloody civil wars in southern Africa and much, much more. Grandin estimates that the total casualties that can be traced back to Kissinger's policies and his support for violent actors could be upwards of 4 million people.

Why would Clinton want his approval? Of course, it wouldn't be fair to assume Clinton condones Kissinger's all of blood-soaked actions. During Thursday's debate, she suggested she was selective in the kind of insight she drew from him, and that disagreements with some of his ideas doesn't prevent her from learning from him.

"Yes, people we may disagree with on a number of things may have some insight, may have some relationships that are important for the president to understand in order to best protect the United States," she said.

Seeking the opinions of people with whom you disagree is a necessary part of governance in a democratic society. But it's one thing to say one can learn from someone with whom you don't see eye to eye, and quite another to say that it's worth actively seeking out the counsel of someone with values so at odds with one's own alleged value system of progressivism, someone with such an extraordinary history of committing what constitute war crimes by the standards of international law.

Clinton gave Kissinger's recent book a glowing review, and calls him a "friend." She'd be better off making new ones.