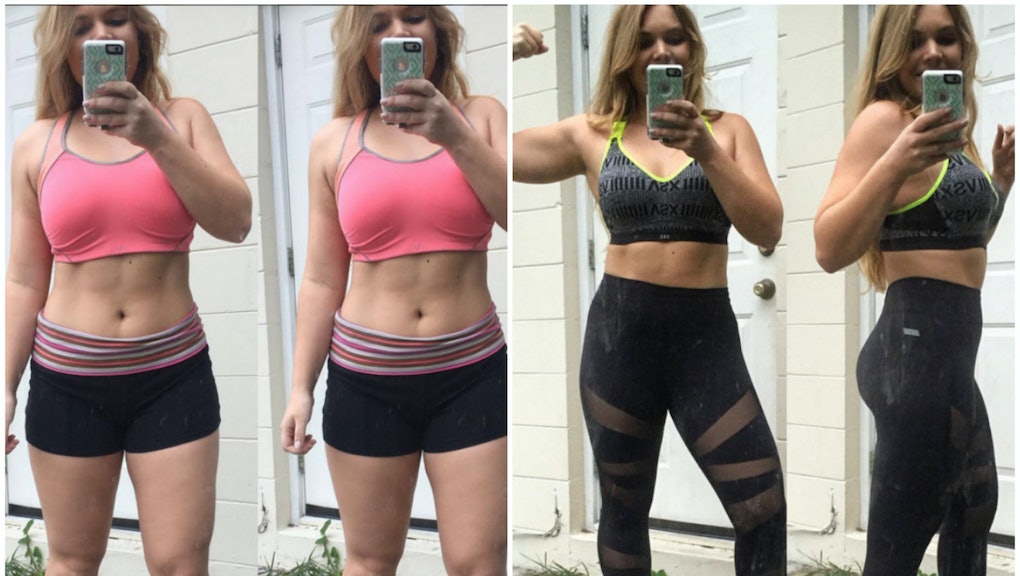 Since the dawn of Proactiv commercials and QVC-related fitness products, there have been before and after photos.

The first image usually features a body that's hunched over with a rounded belly and large thighs, while the second image shows a body that's fit, sexy and ripped. The images are supposed to inspire you to immediately call a 1-800 number for a fitness routine video or some magic diet pill. But deep down, we all know to a certain degree that before and after photos are a sham. And Instagram has only made it worse.

In the left photo, Jess has a round belly, thighs that touch and thick legs. In the right image, Jess has abs and muscular thighs. "These pics were taken [a] second apart this morning," she wrote.

As Jess revealed, on the left her posture is poor, and she's pushed her belly out and adjusted her bikini bottom to show off a layer of fat on her hips. On the right, she's standing straight and she's hiked up her bikini so it hides what she calls her "horrid love handles."

So, why is Jess showing us this? Apparently, she's capitalizing on this newly popular trend of bucking perfection and getting real on Instagram.

"As much as it pains me to showcase these, it also proves that my body isn't perfect and that I still have work to do and fat to lose," she wrote.

Before and afters are bullshit. To a degree, we already know that what we see on Instagram is not reflective of reality. We know Instagram stars are airbrushed to the nines and that they have apps that help suck in their cheeks. Yet, we still scroll through our feeds longingly, hoping to be just like them.

Now social media superstars like Jess, who has more than 49,000 followers, are lifting the curtain to reveal what's really behind those picture-perfect photos.

"Yes I like to show my best most of the time but I've also realized by not showing my worst that it only harms myself," she wrote. "Being vulnerable and imperfect is hard but lying to yourself is worse."

By exposing the work that goes into creating the perfect before and after photos, Jess wants us to know that these full-body transformations aren't instantly attainable. In June, Sophie Kay, a trainer based in London, made a similar point when she took on the #fitspo hashtag by breaking down some of the tips Jess wrote about.

"There are various things you can do to create the perfect selfie," she wrote on the blog Fitology, "All I did in the three minutes between the two photos was to turn off the overhead light, put on underwear that fit better, twist my body slightly to the side to show off my best angle, flex and, of course, add a filter."

Back in July 2013, the Huffington Post published an essay penned by personal trainer Andrew Dixon that was all about the art of the before and after photo. In the essay, Dixon shared a series of photos of himself shirtless. By sucking in or sticking out his stomach, he looked like a completely different person.

"Don't try to look like anyone you see in a transformation photo," he warned. "Be inspired, but don't be disappointed if you don't see yourself the way you see those models."

What Instagram is doing to our self-esteem: People like Huda Kattan, Essena O'Neill and Stina Sanders have also spoken out against aspirational photos on Instagram, but they've also suffered for it. When O'Neill, for instance, started augmenting the captions of her photos to show how much she was paid for posing with certain items, there was immediate backlash. And after Sanders started posting about what she had to do in order to get the best shot on Instagram, she lost thousands of followers.

"I've realized how fake social media has become," Sanders told Mic in November. "I was tired of hearing people say how glam my life is because of the images I share."

It's a catch-22: Although there are people actively fighting the propagation of the perfect Instagram image, their followers don't seem to want to know the truth. But for the bloggers who are taking a step back and letting their followers know that they are not some flawless, perfectly coiffed and toned lizard person, it's worth it.

And for some people, that's a reminder they desperately need.