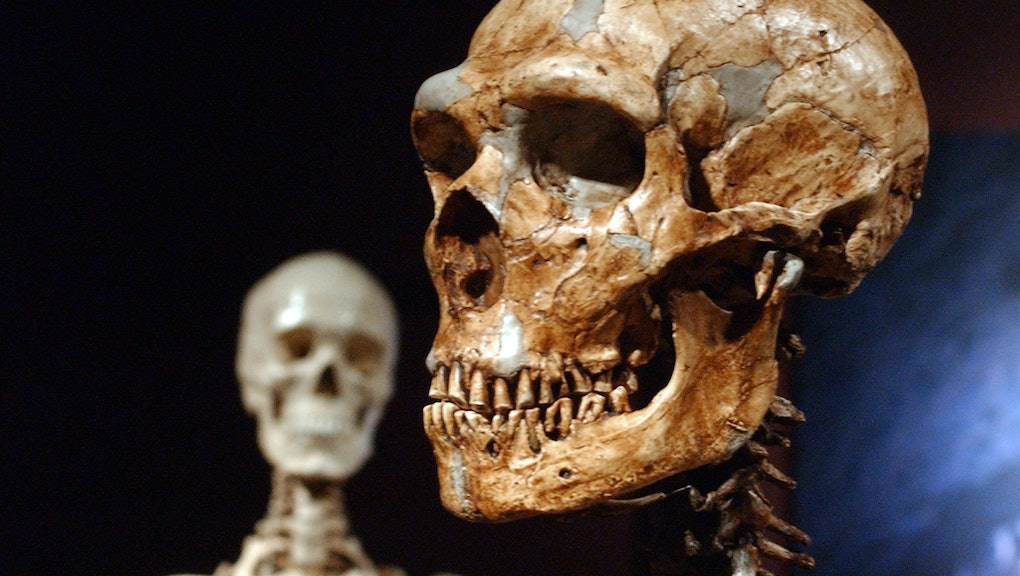 Your Neanderthal Genes Could Be to Blame for Your Depression

When you're a single Homo sapiens looking for love in prehistoric Europe or Asia, sometimes you end up sleeping with a few Neanderthals.

Interbreeding between our early human ancestors and Neanderthals happened a lot. As a result, up to 4% of modern non-African people's DNA is inherited from Neanderthals — a discovery made in 2010.

Still, scientists didn't know how that lingering Neanderthal DNA affected our present biology — until now. It turns out, having that DNA could make you more prone to a number of health problems, including depression, heart attacks and nicotine addiction.

Published in the journal Science, the study looked at the genetic make-up and medical history of around 28,000 adults of European ancestry. Researchers compared that data to maps of the genetic information known to have been passed down to us by Neanderthals — around 135,000 genetic variations.

"Our main finding is that Neanderthal DNA does influence clinical traits in modern humans," said co-author John Capra, an evolutionary geneticist at Vanderbilt University, according to the Guardian. "We discovered associations between Neanderthal DNA and a wide range of traits, including immunological, dermatological, neurological, psychiatric and reproductive diseases."

Some of those traits that pose health risks to us today probably helped our early ancestors survive 50,000 years ago. Take coronary artery disease, the No. 1 killer of Americans — and one of the traits inherited from our Neanderthal DNA, according to the study. While nowadays, blood clotting impedes our survival, in ancient times, it likely helped seal wounds more quickly, according to the Guardian.

"It is possible that some Neanderthal alleles provided a benefit in early [anatomically modern human] populations as they moved out of Africa, but have become detrimental in modern Western environments," the researchers wrote.

Neanderthals lived between 400,000 and 40,000 years ago, according to the Smithsonian Institution, and are known to have had angled cheekbones, large noses and stocky bodies. They interbred with modern human ancestors once both groups had migrated out of Africa, which is why descendants of sub-Saharan Africa don't have Neanderthal DNA, according to the Guardian.

The study goes to show that seemingly innocuous hook-ups can alter the course of human history. Hopefully, our awkward Tinder dates don't end up unleashing monstrous diseases upon our descendants another 50,000 years down the line.