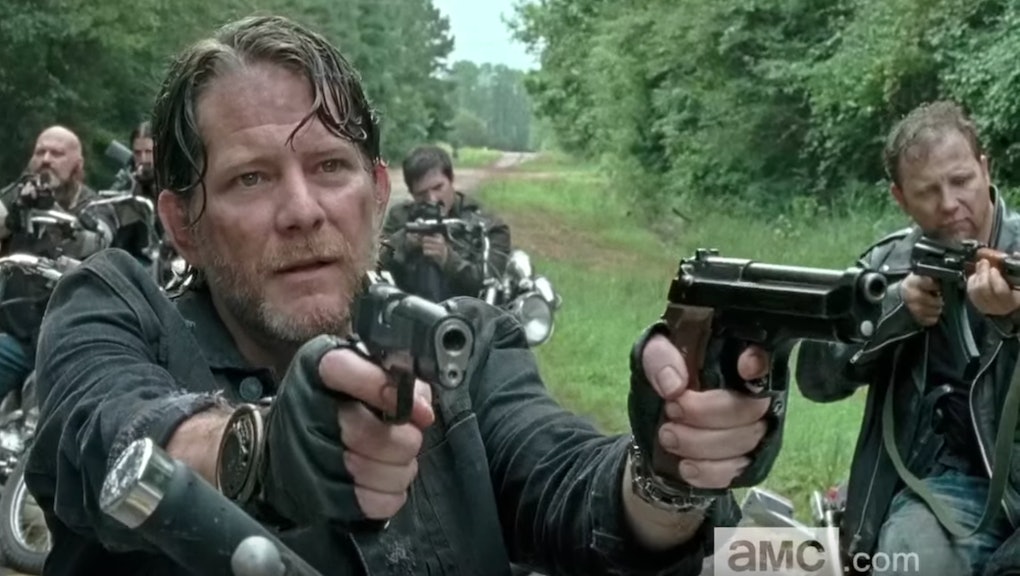 'The Walking Dead': Preview, Start Time and What's in Store in Midseason Premiere

Fans will soon be thrust back into the post-apocalyptic zombie mayhem that is The Walking Dead. The show is set to return on AMC at 9 p.m. Eastern on Sunday for the second half of season six. In typical Walking Dead fashion, the group is split up as everyone faces a precarious situation. Alexandria has been swarmed by zombies, others are outside the gated community and others still have been stopped at gunpoint at the side of the road by a new set of foes.

We don't know what will definitively happen in the latter half of season six — it wouldn't be fun to know everything anyway — but we do know a menacing villain will be introduced, and a slew of deaths is in the cards. One may be coming as early as the premiere.

(Editor's note: There are detailed spoilers for the first half of season six ahead.)

Where the characters are now: Rick (Andrew Lincoln) and a large chunk of the crew are stuck inside the walls of Alexandria, which had been surrounded by zombies for days. Prior to the midseason finale, an outlying tower had fallen, decimating a section of the wall and allowing the horde to get through. In the chaos, Deanna (Tovah Feldshuh) was killed, and Rick had to resort to covering everyone in zombie guts to evade the zombies in a scene that recalled season one, when the group did this to escape Atlanta.

We last see them exiting one of the houses. Though the tactic worked, Sam (Major Dodson) — a kid who is not even remotely aware of the dangers of the outside, apocalyptic world — called out for his mother in the midst of the walker frenzy, before the end credits roll. The expectation is that this will cause a chain reaction that will lead to some unfortunate deaths — but for whom is uncertain.

Meanwhile, Glenn (Steven Yuen) and Enid (Katelyn Nacon) are outside Alexandria, surveying the chaos, before Glenn sees his pregnant wife Maggie (Lauren Cohan) escaping the walkers on top of a part of the wall that remains intact. Additionally, the last remaining member of the Wolves (Benedict Samuel) takes Denise (Merritt Wever) hostage and escapes after Morgan (Lennie James) and Carol (Melissa McBride) fight — verbally and physically — over whether to kill him.

Finally, Daryl (Norman Reedus), Sasha (Sonequa Martin-Green) and Abraham (Michael Cudlitz) are returning to Alexandria when they are stopped at gunpoint by a gang of bikers blocking the road. The tense situation is only heightened in AMC's four-minute preview of the midseason premiere, released Wednesday. As one member of the group says, their "property now belongs to Negan," and doesn't take kindly to Abraham asking questions.

Enter Negan: Comic book fans already know who he is, and now the TV audience will be introduced to Negan (Jeffrey Dean Morgan) as well — a delightfully diabolical character. Robert Kirkman, The Walking Dead comic book' creator and the show's executive producer, said Negan's presence will be an "atomic bomb" on the show, one that will instill another element of peril for the group that will alter its core.

"As far as shake-ups go, we have lots of shake-ups from season to season," Kirkman told Entertainment Weekly. "It keeps things interesting — keeps the blood pumping, I like to say — but Negan is kind of an atomic bomb that's going to be dropped on the show and the show will probably never be the same after that. So buckle up, I guess?"

Without giving too much away, Negan is generally recognized as being even worse than the Governor (David Morrissey), the main villain for season three and the first half of season four. If the show stays true to the comics, it will lead to at least one bloody, gruesome death for a key main character.

It's going to be a bloody season — no surprise. Yes, The Walking Dead is an inherently gory show, but Lincoln has promised that from the get-go, we're in for a bloody ride. "Rest assured, it's not looking good for the Alexandrian crew," Lincoln told Entertainment Weekly. "Yes, there will be blood."

Furthermore, Lincoln added in a separate interview with Entertainment Weekly that the season six finale is deeply disturbing, even for the show's standards.

"I felt sick to my stomach when I read the [finale] script," Lincoln said. "It was the first day in the whole six years of working on The Walking Dead that I was late for work because I woke up in the middle of the night and I couldn't get back to sleep. I was so angry and frustrated and I felt sick. And that was just after reading it."

The Walking Dead is one of the only series on TV where news such as this should excite fans. It's going to get bloody, it's going to get messy — and it all starts this Sunday.