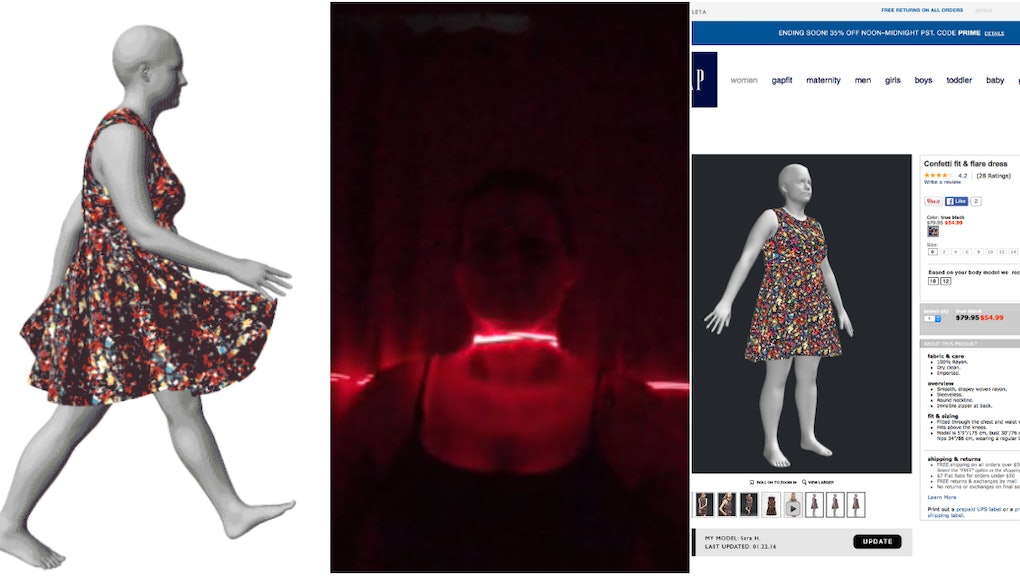 I was less uncomfortable than I thought I'd be in the scanner.

Descriptions that I had read about the experience made it sound intimate and awkward — standing completely still while wearing a form-fitting outfit as a red beam of lightly slowly passes over every inch of your body, head to toe. But the process of creating a true-to-life 3-D model of my body was not only comfortable, but also rewarding — especially if it can save me time, effort and discomfort later on.

Read more: These Kids 3-D Printed Their Own Prosthetics

That's one of the goals of Body Labs, a company that aims to use 3-D technology to analyze the human form. With a mission of "bridging the gap between the physical and digital worlds," as the startup's website stated, Body Labs is using body scanning to create models, which can then be used for all sorts of purposes: think aviation experts selecting the width of airplane seats, doctors measuring a patient's change in body mass, the military creating bulletproof vests for women. As Body Labs tells it, there are endless uses for 3-D body-scanning technology.

Jon Cilley, the director of marketing at Body Labs, described Body Labs to Mic as a software company, one that works to "essentially digitize and provide your individual body shape as a platform to build on top of for companies."

For clothing brands or stores, that could mean providing size recommendations based on your unique body shape. The days of hauling four different sizes to a dressing room could be a thing of the past, as would the wave of anxiety that washes over you while digging through an unorganized sale rack. No longer would you guess if you're a medium or large. It could especially help in the case of online shopping; Cilley said over 40% of online clothing purchases are sent back, often because of fit problems.

The technology behind Body Labs was actually born from a crime scene. One of the co-founders of Body Labs, Michael Black, is also an adjunct computer science professor at Brown University and an expert in computer vision. In 2002, he was approached by Virginia state police to help identify the perpetrator of a murder caught on a surveillance video.

Black ended up enlisting his undergrad students to help, teaching them how to identify a human through computer vision techniques and creating a statistical model of the human body. One $5 million grant later, the technology was exclusively licensed by the newly formed Body Labs company, said Cilley.

"The idea is that if you take this tech, you can produce a digital version of you," Cilley said. That digital representation forms your Shape ID, which would live with you. "You could pass it between retailers, or you could then go in the store and they would have your ID, your Shape ID, on file."

That Shape ID could be a far more useful alternative to how clothing is currently sized, using fit models. Fit models are real people with real bodies that form the basis for all the clothes we wear. As anyone who's ever tried on a pair of jeans that gaped in the back or bunched at the ankles knows, that's an inherently flawed system.

"Many of these major brands or retailers are using one male [and one] female fit model, and then they have a grading process," Cilley said, by which they simply scale sizes up or down proportionally. If you're shorter but also wider than the fit model, good luck.

Me-Ality, for example, is a Canada-based company that used 3-D scanning booths, not unlike Body Labs', to scan women's bodies for measurements in Bloomingdale's stores. The scanning kiosks are no longer in use. The problem, some experts have said, is that some women aren't ready to see their own bodies measured so accurately or to endure a process so vulnerable in order to obtain them.

"It's kind of silly, but people don't really want to see [what they look like]," Sarah Ahmed — creative director of denim brand DL1961, which has tried its own digital sizing system sans scanning — told AdWeek.

Yet my own scanning experience wasn't all that traumatic. The scanner I used was in the Body Labs office, a laidback startup space in New York City complete with an office hoverboard and a chill vibe. Wearing my yoga pants and tank top in the pod wasn't more uncomfortable than, say, wearing the same outfit while staring into a mirror alongside 15 fit women in a workout class. Staying completely still did not to prove to be difficult, as the scanner moves quickly. The hardest part was removing the large stack of bracelets I wear.

Clothing brands and stores still need to catch up; as retail consultant Bob Grayson pointed out to AdWeek, some innovations like kiosks have seemingly failed in part because all the custom sizing in the word "does little good when apparel brands still make only 15 sizes of a given garment."

There are likely endless creative ways clothing brands and stores can make use of 3-D technology, already a reality elsewhere in our lives. By the time 3-D body scanners set up shop at, say, your local H&M, shoppers just might be ready.