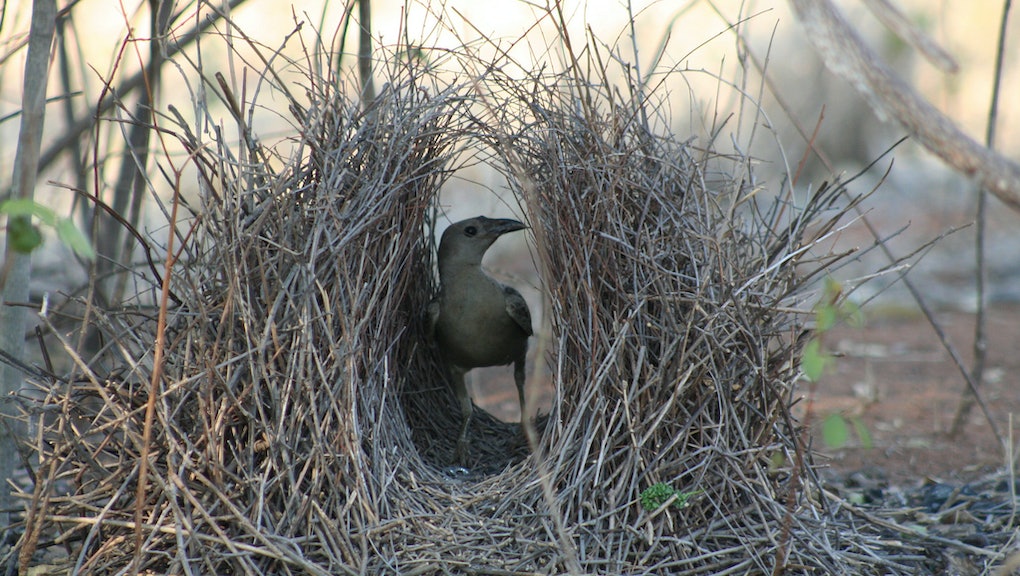 You've heard of the fuccboi. Now, allow us to introduce you to the fuccbird.

Matt Simon at Wired has a detailed writeup of the great bowerbird, an opportunistic, deceptive little creature that uses a mix of visual duplicity and straight up mind games to attract its mate.

"This is the saga of bowerbird hanky-panky, a romance packed with more lies, illusions and thievery than a soap opera — with none of the insufferable soft focus," Simon writes. (The bowerbird is the latest entry in Simon's long-running series "Absurd Creature of the Week.")

The male half of the species is predominantly found in New Guinea and Australia. They're also smart little bastards: According to John Endler, an evolutionary ecologist at Deakin University in Australia, neither he nor his colleague have ever seen the bird fall prey to a predator in the wild.

Ask and ye shall receive: The Justin Bieber of birds forms a bower — a kind of dwelling — as his love shack. It's made up of sticks organized vertically, like so:

But the bachelor pad isn't quite as simple as it appears. The little jerk puts larger objects in the background and smaller objects in the foreground — the "art of forced perspective," as Simon described it — which has the delightful (for him) effect of tricking his potential boo into thinking that the bower is smaller than it actually is.

"It would probably have an effect of making the court look smaller and therefore the bird itself might look larger," Endler noted.

Then comes the color distortion. The male covers the inside of the bower with red plants and bits of fruit and waves green-colored objects in the female bird's face to distract her. Because of the way the birds' eyes work — their red cones and green cones compete for attention to pick up on colors — the female will be much more likely to notice the green things the male is shoving in her face.

If he's successful, Simon explained, the female will allow the try-hard male to mate with her. If not, "she'll just burn him and fly away." (Fly away, girl.)

Like human fuccbois, male great bowerbirds are quite competitive. If two bowers are too close to each other, one bird will sneak around until the other is away and then destroy his hard-won bone zone. "There's the other side of the story: If you're going away to maraud someone, your own bower might get ruined," Endler told Wired. "Sounds a lot like politicians, doesn't it?"

Of course, this kind of behavior serves one noble purpose: the continuation of the species. It's also not the wackiest mating ritual in the animal kingdom — that honor likely goes to the brown antechinus, which has so much sex it literally dies.

Still, there's something deeply and oddly satisfying about poking fun at the mating ritual of the showoff that is the male great bowerbird.