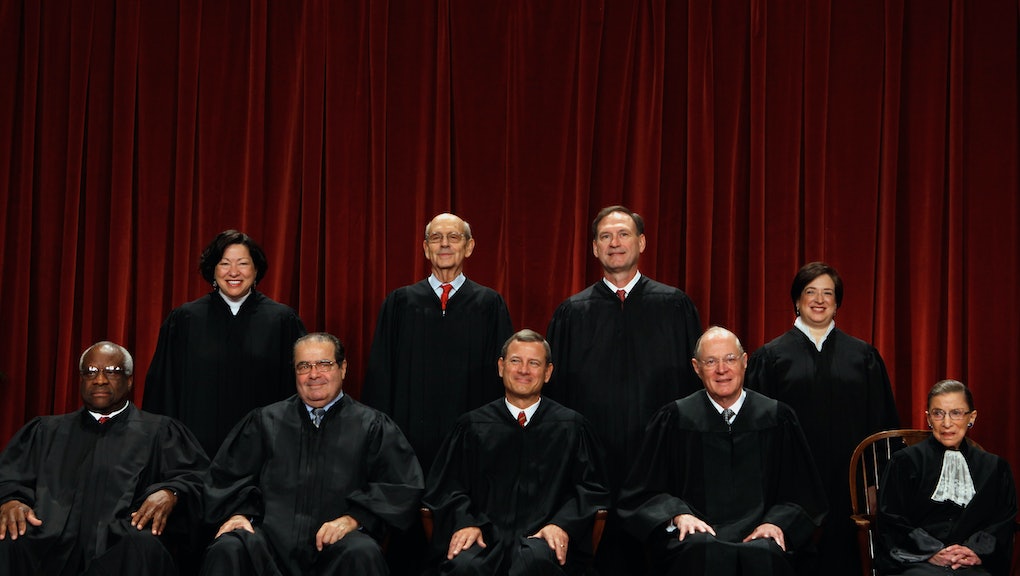 Just moments after news of the death of Supreme Court Justice Antonin Scalia came out on Saturday afternoon, politicians and presidential hopefuls on both sides of the aisle quickly rushed to the ramparts. Less than an hour after the world learned of Scalia's loss, the battle to name his successor had already begun.

Senate Democrats called for the process to fill Scalia's vacancy to start at once, while Republicans made it clear that they think the GOP should block any nominations from the White House until after this year's election. Epic gridlock over a Supreme Court nomination by President Barack Obama at this point appears inevitable, and if recent history is any guide, the likelihood that Republicans will deny the president of any of his picks is substantial.

It's also perfectly legal — the Constitution contains no mandate that a Supreme Court vacancy has to be filled within a certain period of time.

A Supreme Court with just eight justices for the next year or so would have a dramatic impact on the legal and political landscape of the country. It would render the Supreme Court far less powerful, and the kind of power struggle required to keep the number of justices at eight will change the dynamic of the 2016 elections.

A weaker, dysfunctional court: The Supreme Court's power as a legal entity would be weakened significantly over the course of the next year if it remains limited to eight justices. Without Scalia on the bench, the court has four reliably liberal votes, three reliably conservative ones, and one center-right vote (Anthony Kennedy) that will likely side with the conservatives on many of the major decisions the court faces in the coming year.

On decisions ranging from the legitimacy of affirmative action in higher education to the legality of requiring public employees to contribute money to unions, there's a significant chance that the court will split 4-4. When that happens, it affirms the lower court's ruling.

"What we'll have is a year of dysfunction on the Supreme Court, assuming many of the major decisions are going to split 4-4," William Howell, a political scientist at the University of Chicago, told Mic.

In other words, without the odd number of justices that allows there to be a decisive majority on issues that split the court ideologically, the justices' votes will in many cases cancel each other out, and effectively mute its influence over legal affairs.

A higher stakes election: The battle over Obama's nomination will likely also reshape the 2016 elections. In a time of normal levels of congressional function, getting a nominee through a Senate controlled by the opposing party would be a challenge, but by no means impossible; historically, filling Supreme Court vacancies have not caused intractable gridlock. But with polarization in Congress at its highest levels since the early 20th century and Republican leaders already promising obstructionism through January, Obama's nominations during his remaining time in office may never end up getting anywhere.

While Republicans' might consider denying Obama his agenda to be a victory for the party, there's certainly a possibility that it could cause them to grow even more unpopular in the eyes of the public.

"If Obama can find someone with bipartisan credentials, whose record in the law is unimpeachable, then he has a shot — and then if he doesn't get it through, then the Republicans in Congress look particularly obstructionist," Howell said. "And this being an election year, that may have some bearing on the outcome of the next presidential election."

In other words, there is the possibility that the public will grow more disenchanted with the Republican Party if they see it act too defiantly  — and that could hurt both their congressional and presidential prospects at the polls in November.

In order for Obama to make the strongest case against the Republicans, he would likely be best served nominating a moderate, center-left pick for the high court. It would showcase his own inclination toward cooperation even if the nominee is blocked, and if his nomination works out it would still help change the balance of the Supreme Court. He doesn't need to appoint a dyed-in-the-wool liberal to the court in order to tip the balance in favor of progressive rulings. Rather, Obama needs only to get someone to the left of Kennedy.

The likelihood of bitter battles in the Senate in the coming months over Scalia's successor could change the public's interest and turnout in this year's elections. Staffing the judiciary is the kind of presidential power that goes largely unappreciated, since it's so occasional and rarely hangs in the balance in the run up to the election. But this year, more people will grow aware of its significance and realize that a vote for a president is also a vote in favor of a Supreme Court that matches their worldview. That could motivate more people in both parties to make it to the voting booth in November.

As opportunistic and ugly as the politicking in the wake of a political figure's death can be, the death of Scalia could end up being civically healthy, compelling citizens to realize how much is at stake when they vote to put someone in the White House.