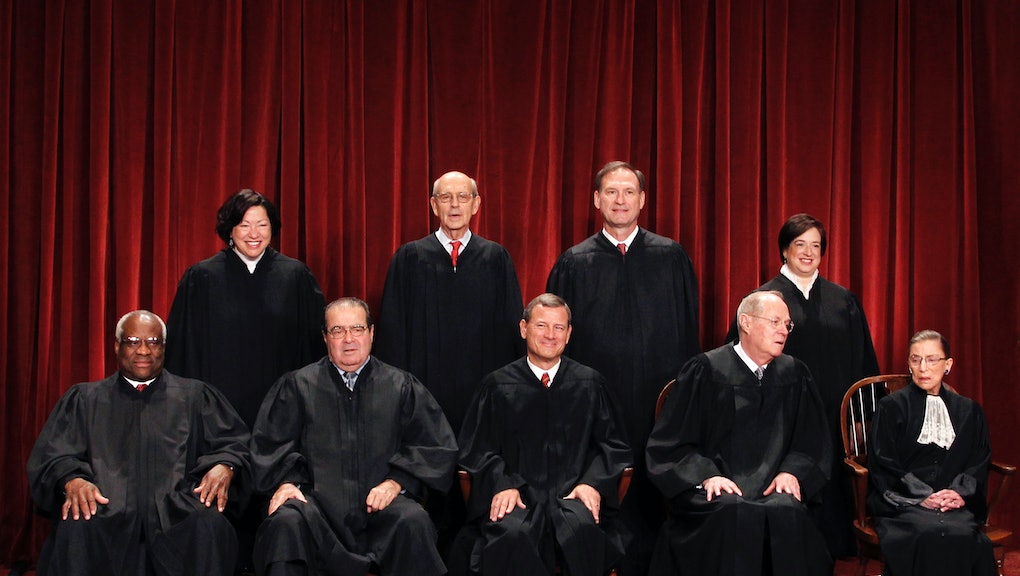 What Does Justice Scalia's Death Mean for These Major SCOTUS Cases?

Supreme Court Justice Antonin Scalia's death on Saturday sent shockwaves across the nation's sociopolitical landscape. The implications his passing has for some of the major issues scheduled to be tried in the Supreme Court — namely abortion, unionization, affirmative action, immigration and redistricting voting constituencies — could be significant.

"The passing of Justice Scalia of course affects the cases now before the Court," wrote Tom Goldstein, an appellate advocate and Supreme Court practitioner, for SCOTUSblog.

For all cases which have not been publicly decided, Goldstein wrote, Scalia's vote is automatically null. And for those cases where his vote did not influence the outcome either way (if, for example, he was part of a dissenting minority), they will proceed as usual.

However, if the justices split 4-4 on a decision, a lower court's previous decision will stand, though that decision will not create legal precedent for comparable cases in the future.

But from a more immediate perspective, these are the pending SCOTUS cases where Scalia's absence could have the most impact:

Abortion: One of the most closely watched and contentious cases is Whole Woman's Health v. Cole, with arguments scheduled to be presented to the Supreme Court on March 2. The Supreme Court has not tried an abortion case in more than two decades.

Specifically, this case explores the constitutionality of a Texas law which imposes a series of restrictions on abortion clinics, limiting a woman's ability to terminate a pregnancy.

These restrictions include everything from an abortion provider's hospital admitting privileges to regulating the size of the doorways in those clinics.

The named plaintiff in this case, Whole Woman's Health, argues the restrictions do not actually provide any medical or safety advantage to the women using their services and instead serve to consume more resources and make providing the procedure more difficult.

If the Supreme Court were to rule against Whole Woman's Health and in favor of Texas, it would facilitate the protection of similarly inhibiting laws in other states across the country and would be devastating to the movement advocating for a woman's right to choose.

Given Scalia's track record of staunch conservatism, he would have likely voted in favor of Texas.

Affirmative action: In Fisher v. University of Texas at Austin, SCOTUS is faced with a decision that could jeopardize affirmative action in the college application process.

Arguments have already been heard regarding the constitutionality of the university's affirmative action program, which the court did not overwhelmingly embrace.

In fact, Scalia drew ire in December when he said, "I don't think it stands to reason that it's a good thing for the University of Texas to admit as many blacks as possible," according to the New York Times.

Suffice it to say, Scalia would probably not have voted in favor of preserving the practice intended to promote diversity amongst the student body.

Redistricting: In yet another Texas case, Evenwel v. Abbott, SCOTUS will debate the necessity of allotting one vote per person — essentially, whether or not congressional districts are drawn up by counting the number of people residing within them or the number of eligible voters residing inside them.

"Adopting Texas' hypothetical approach risks rendering residents of this country who are ineligible, unwilling, or unable to vote as invisible or irrelevant to our system of representative democracy," the Office of the Solicitor General said about the case, according to USA Today.

The question of "one person, one vote," as the case is being described, could also potentially influence the ease with which local politicians can gerrymander districts, manipulating the boundaries of electoral constituencies in their favor.

"Evenwel v. Abbott may prove to be the most consequential case of the coming Supreme Court term due to its possible electoral impact," wrote Andrew Grossman for the Heritage Foundation, a right-wing think tank.

As minorities and underserved populations have historically been, and continue to be, marginalized in the electoral process, protecting the equality of every individual could easily sway the outcomes of future elections.

Scalia conceivably would have voted in favor of Evenwel, which argues apportionment should be based on the number of voters rather than people, essentially ignoring all those who aren't part of the electorate, including felons and children.

Unions: Friedrichs v. California Teachers Association, which heard oral arguments on Jan. 11, will decide whether or not public employees can freely unionize.

The ruling will potentially restrict unions consisting of at least 9 million public employees in 23 states and Washington, D.C. Michael Carvin, the lawyer representing the conservative petitioners, has argued a union is a political organization that "advocates an ideological viewpoint," which the challengers "do not approve of," the Atlantic reported.

Again, given Scalia's reactionary voting patterns, those fighting to preserve the right to unionize might find solace in his absence from the bench.

The Supreme Court is slated to hear still more cases on contentious issues — such as immigration and whether President Barack Obama's overhaul should be repealed — which will invariably be affected by Scalia's death.

Now, with justices essentially split down the middle on their political leanings, the pressure is on Obama to successfully appoint a Scalia successor before his term is up. It could mean a pendular shift for future SCOTUS decisions, not to mention the future of law in the United States.