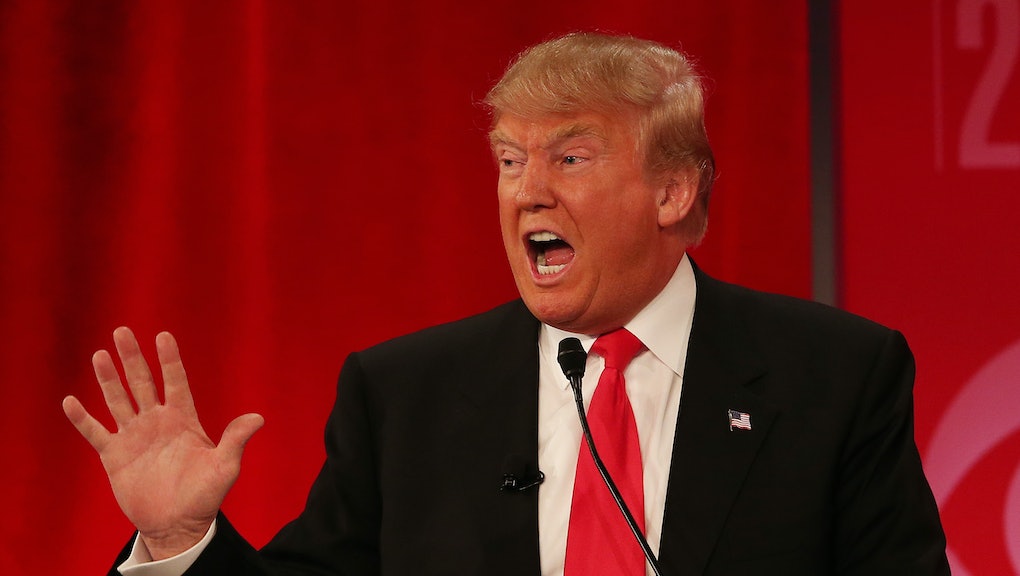 Thirty minutes into the Republican candidates' latest debate in South Carolina, the gloves came off between former Florida Gov. Jeb Bush and billionaire frontrunner Donald Trump — and the verbal blows exchanged by the political foes were bloodier than ever.

After a testy exchange over their respective strategies to defeat the Islamic State, Trump laced into Jeb's brother, former president George W. Bush, and accused the former commander in chief of deliberately misleading the U.S, public into the war in Iraq, invoking his brother's failure to prevent the attacks of September 11, 2001.

Trump's and Bush's cage match was precipitated by debate moderator John Dickerson's asking Trump about a comment he made during an interview on CNN in 2008 in which Trump remarked, "Personally I think would have been a wonderful thing [if Bush was impeached] for the war."

Trump first attempted to deflect the question, noting that "as a businessman," it was his responsibility to "get along with everybody."

Audience booing, however, foreclosed an easy response and Trump dug harder, lambasting the crowd as being establishment donors.

"Obviously the war in Iraq was a big fat mistake," Trump said. "We spent $2 trillion, thousands of lives, we don't even have it. Iran has taken over Iraq with the second largest oil reserves in the world. Obviously, it was a mistake."

Trump then twisted the knife deeper into the Bush family's legacy: "They said there were weapons of mass destruction and there were none."

"I could care less about the insults that Donald Trump gives to me. It's blood sport for him," responded Bush, "While Donald Trump was building a reality TV show, my brother was building a security apparatus to keep us safe, and I'm proud of what he did."

The audience booed once more when Trump returned Bush's serve by noting that George W. Bush had been president during the 9/11 attacks.

"The World Trade Center came down during your brother's reign. Remember that," said Trump. "That's not keeping us safe."