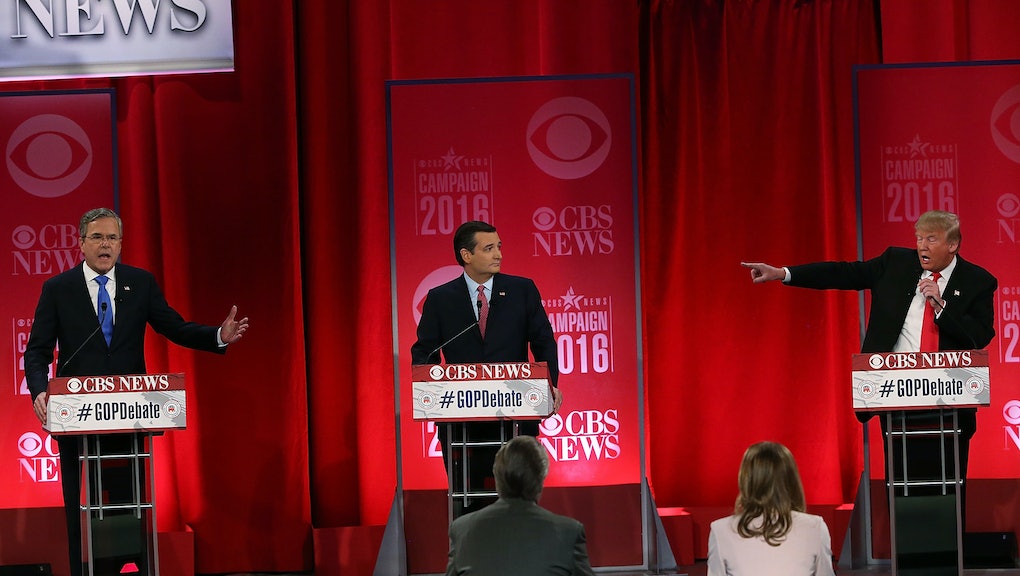 GREENVILLE, S.C. — Donald Trump came to the Palmetto State to bury Jeb Bush, not praise him.

The Republican rivals dropped the gloves Saturday in one of the most pyrotechnic presidential debates yet, throwing haymakers over everything from dynastic politics to the 9/11 terror attacks.

Trump arrived with a cushy lead in the polls — and a yen to savage Bush ahead of South Carolina's Feb. 20 primary, as Mic foreshadowed ahead of the brawl at the ironically named Peace Center.

But Bush, whose frontrunner status evaporated with Trump's mid-June foray into the contest, has some traction and family history here in South Carolina: The latest poll averages say he's at just over 11% support.

So Trump and the former Florida governor played hardball over the future of the party and their interpretations of the past — including how former President George W. Bush handled the 2001 attack on the World Trade Center.

Trump blamed Bush 43 for not preventing the terror strike and lashed out at him for the subsequent "big fat mistake" of the Iraq War. Bush defended his family and slammed Trump's love of "blood sport."

It was ugly. It was personal. And it didn't stop when the debate ended.

Burning Bush: Making the post-broadcast rounds of the spin room, Trump reprised some of his slams against Bush's brother, who carried the state in 2000, remains popular here and joins the family on the stump in North Charleston on Monday.

But the Manhattan frontrunner also openly said payback is part of why he's burning Bush.

"He took $20 million of negative ads on me. And I tell people this and I teach people this: When somebody hits you, you hit 'em back," Trump told the press as his wife, Melania, stood at his side.

"[Bush] doesn't have a chance. He's a total lightweight," Trump said. "But he spent $20 million on negative ads — so yes, I'll hit him on occasion."

Trump kept on Bush's case into the night, needling him via his beloved Twitter feed.

Trump wasn't alone in mixing it up in South Carolina, a state known for no-holds-barred politics, said Sam Clovis, his campaign co-chairman — and if anything, Trump's success made him a target. "If you take a look where people are in the polls... [you] saw the aggression there, and everybody trying to get the one in front of them," he told reporters in the spin zone.

"It was pretty aggressive tonight. I think everybody's fired [up]," Clovis said, "and that's unfortunate, because I think the people who lose are the people of South Carolina and the people of the country."

Graham, a guy who knows what it's like to feel Trump's wrath, mockingly said the frontrunner "got to the left of Bernie [Sanders]" and "embraced nutjob conspiracy theories" that Bush's elder brother "caused 9/11."

As for how it'll play with the voting public here, "The market for those who like Putin and believe Dubya's a liar is pretty small in South Carolina," Graham said, adding that he'll introduce the former president at Monday's rally "and we're going to rock the place."

High stakes for all:  Even if he's looking for a respectable finish and not a win, Bush faces a heavy lift here in light of Trump's dramatic lead. At the same time, Ted Cruz is looking to recapture the excitement of his Iowa caucus win. Marco Rubio is on a redemption mission after a weak finish in New Hampshire, the same state that re-energized the campaign of another Oval Office hopeful, John Kasich.

It was only days ago that Bush launched a thousand GIFs and goofs by imploring a Granite State audience to "please clap." Some of his debate turns were uneven; others seemed the political equivalent of having Trump steal his lunch money and stuff him in a locker.

But Team Bush seemed buoyed by the latest televised faceoff. The candidate who promised to run a "joyful race" quickly blasted out a debate reel that framed him as unfazed by Trump's tirade.

Tough takedown: Whatever party insiders think of him, the 2016 battleground is littered with the suspended campaigns of those who tried and failed to stop The Donald juggernaut. Trump is popular, he's resonating with a solid swath of the Republican base and he wants to force Bush off the map ASAP.

Big picture, Graham said after the Saturday night fights: "If you can't take on Donald Trump, you're not going to beat Hillary Clinton."

"Jeb Bush is taking on Donald Trump — and he's cleaning his clock."

South Carolina Republicans will be the judge of that in six days.