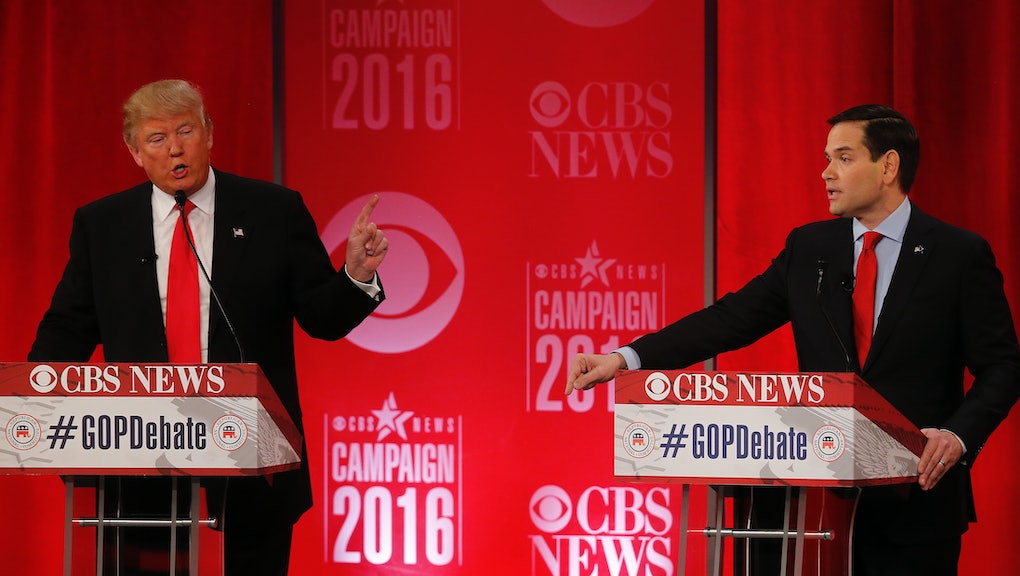 Winners and Losers at the GOP Debate in South Carolina

Tussling over immigration reform, social issues, foreign policy and even 9/11, the Republican candidates for president met in Greenville, South Carolina, on Saturday night for their ninth debate of the 2016 cycle.

With Donald Trump aiming to hold onto a healthy polling lead one week before the South Carolina primary, Ted Cruz seeking to unite conservatives behind his candidacy and establishment-oriented Republicans hoping to lock down mainstream GOP voters, the fundamental dynamic was not much different than in previous encounters. But with the field whittled down to just six candidates after this week's New Hampshire primary, Saturday night's affair was the GOP's most intimate yet.

The chief moderator for the CBS News-hosted event shone throughout the evening, displaying a command of the facts (occasionally to the audience's consternation), provoking spirited exchanges between the candidates and largely avoiding the preoccupation with inside baseball that has characterized more than a few primary debates.

Mounting his first-ever bid for office and equipped with no previous debate experience, Trump has never been the most skillful debater in the GOP race. But the billionaire businessman didn't need to match the rhetorical flair of, say, a Marco Rubio or Ted Cruz. He simply needed to maintain the status quo and avoid a disastrous performance.

Though Trump may have alienated some voters in military-heavy South Carolina with his denunciation of the Iraq War — a "big, fat mistake" — and his charge that President George W. Bush bore responsibility for failing to halt the 9/11 attacks, similar statements haven't prevented him from building a solid lead in the Palmetto State polls.

And while this wasn't a pro-Trump crowd, he impressed at the start of the debate, when asked about his opposition to allowing President Barack Obama to appoint a successor to the just-deceased Supreme Court Justice Antonin Scalia.

Calling Scalia's death "a tremendous blow to conservatism" and the country, Trump deftly played to the GOP base's hunger for leaders who will thwart the Obama administration at every turn. Acknowledging that Obama would make an appointment anyway, Trump said, "I think it's up to [Senate Majority Leader] Mitch McConnell and everybody else to stop it. It's called delay, delay, delay."

The crowd ate it up.

Trump did come under withering assault from former Florida Gov. Jeb Bush, who attacked the mogul as a crude bully, and Cruz, who questioned Trump's conservative bona fides.

But Bush's fiery performance may have only guaranteed that the establishment lane will remain congested for the foreseeable future, while it won't be clear until heavily conservative Southern states have voted whether Cruz's suggestion that Trump is a liberal in conservative clothing will make a real difference at the polls. Months of similar attacks haven't derailed the Manhattanite, though they may have played a role in his narrow Iowa defeat.

Coming out of Iowa, the dominant view held that the GOP race was effectively a three-man contest among Trump, Cruz and Rubio, whose surprisingly strong third-place showing in the Hawkeye State boosted his hopes of becoming the establishment's consensus candidate.

But following Rubio's disastrous debate performance last weekend — and thanks in part to New Hampshire voters' proclivity for casting aside the received wisdom — the Granite State primary scrambled that narrative. Trump dominated the field with 35% support, but it was Ohio Gov. John Kasich, not Rubio, who came in second. Rubio actually finished a humiliating fifth, behind Cruz and Bush. The result was a nightmare for the GOP elite, whose hopes of stopping Trump and Cruz are growing dimmer.

Saturday night's debate did nothing to brighten those prospects.

Rubio turned in a serviceable if unmemorable performance, aggressively attacking Cruz for alleged "lies" about topics like immigration, social issues and whether Ben Carson would drop out after Iowa. (Cruz's campaign blasted out that he would, encouraging the neurosurgeon's supporters to caucus for the Texan. Carson is still in the race.) But if Rubio's going to pull off the dramatic turnaround his campaign needs, we won't be marking down this debate as the moment that process began.

Bush, meanwhile, continued to be the field's most dogged castigator of Trump, though that strategy hasn't exactly reaped dividends for him. And Kasich may have solidified his standing as every Democrat's favorite Republican by lamenting partisan polarization, but he did little to suggest that his New Hampshire performance wasn't his peak.

Rubio wasn't the only candidate to call Cruz a liar. Trump echoed the charge, which has become a staple of the real estate tycoon's colorful tweets in recent days.

"You are probably worse than Jeb Bush. You are the single biggest liar," Trump thundered. "This guy lied about Ben Carson when he took votes away from Ben Carson in Iowa. And he just continues. And today, we had robo calls saying, 'Donald Trump is not going to run in South Carolina,' where I'm leading by a lot. I'm not going to run. Vote for Ted Cruz. This is the same thing he did to Ben Carson. This guy will say anything."

Such attacks, now coming at Cruz from all directions, undercut his carefully-cultivated image as the purest, most authentic conservative in the race, one whose personal integrity places him securely above the tricks and byways of official Washington.

Perhaps most surprising, though, was how the champion college debater often seemed to fade from the scene on Saturday night. His most memorable moments involved prompting the audience to boo the fact that Justice Anthony Kennedy was confirmed to the Supreme Court in 1988, not 1987, and a forced attempt to break into Spanish as he sparred with Rubio on immigration. Not exactly the makings of a South Carolina upset.

Carson's biggest victory of the night? CBS didn't ask the candidates to come out on stage individually, avoiding a repeat of last weekend's awkward moment.