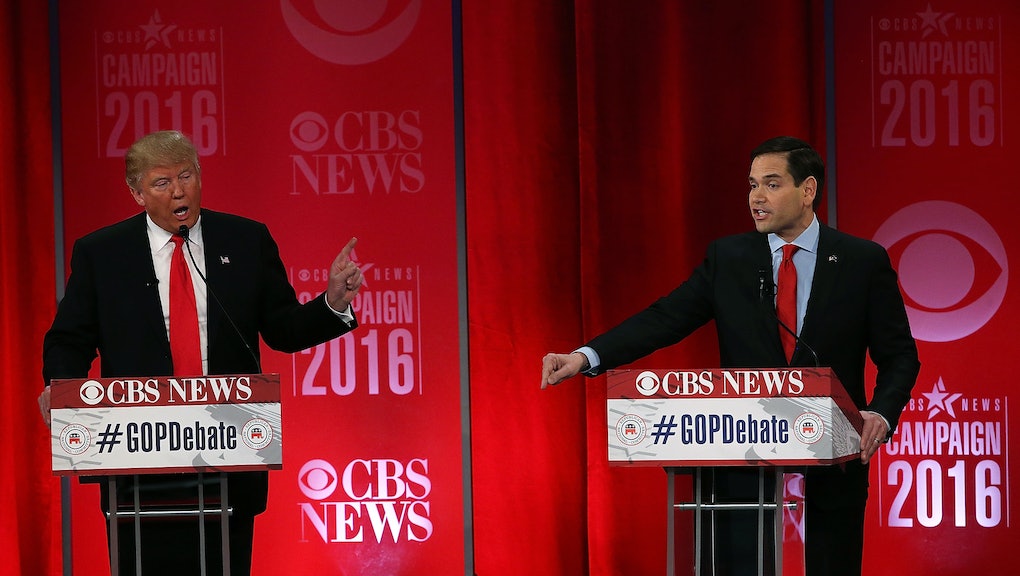 Marco Rubio's Debate Answer on Poverty Made No Sense

During Saturday's Republican presidential debate in South Carolina, Sen. Marco Rubio (R-Fl.) seemed to regain his stride. After a catastrophic performance in New Hampshire last week, Rubio looked comfortable in his own skin again and provided more substantive, less-scripted responses to questions on the economy, foreign policy and immigration. But that doesn't mean they were any less misguided, and his bizarre remarks on poverty were a prime example of that.

Rubio's comments were short and sweet, and composed entirely of conservative myths about the way anti-poverty programs function in the U.S. So what exactly was Rubio wrong about?

The idea of poverty programs as becoming a lifestyle is not grounded in the facts. Temporary Assistance for Needy Families, what's commonly understood is welfare, has strict time limits, and it has work requirements. The Supplemental Nutrition Assistance Program, or what's more widely known as food stamps, generally have work requirements and time limits for some of their recipients.

So while Rubio is keen on winning voters over by summoning the old conservative trope of poor people leeching off of a system that enables laziness, the reality is that since the 1990s these programs have been explicitly designed to ensure that such behavior is actually impossible (which is not to say there's widespread evidence that it was happening before then). There's also no evidence that entitlement programs like food stamps are used fraudulently by many recipients.

Rubio's proposal to improve the inefficiency of federal anti-poverty programs by turning them over to the states might be worth considering — if it wasn't happening already. TANF is funneled to states in the form of block grants, which are deliberately designed to maximize the flexibility states have in offering their residents cash assistance.

But as a number of public policy experts have pointed out, it creates an incentive system whereby states try to keep their cash assistance caseloads low so as to ensure that they can use as much of the money from the grant as possible on other kinds of state programs, typically unrelated to poverty. "The federal money is used to ease state budgets, and you've created a structure where TANF ... is the welfare system for the states rather than for people," H. Luke Shaefer, a public policy professor at the University of Michigan, explained to Mic in an interview in September.

Rubio appears to be back in form as the fresh-faced debater that helped him win attention early on in the race. But make no mistake, many of his ideas are old and stale and better off in the dustbin of history.