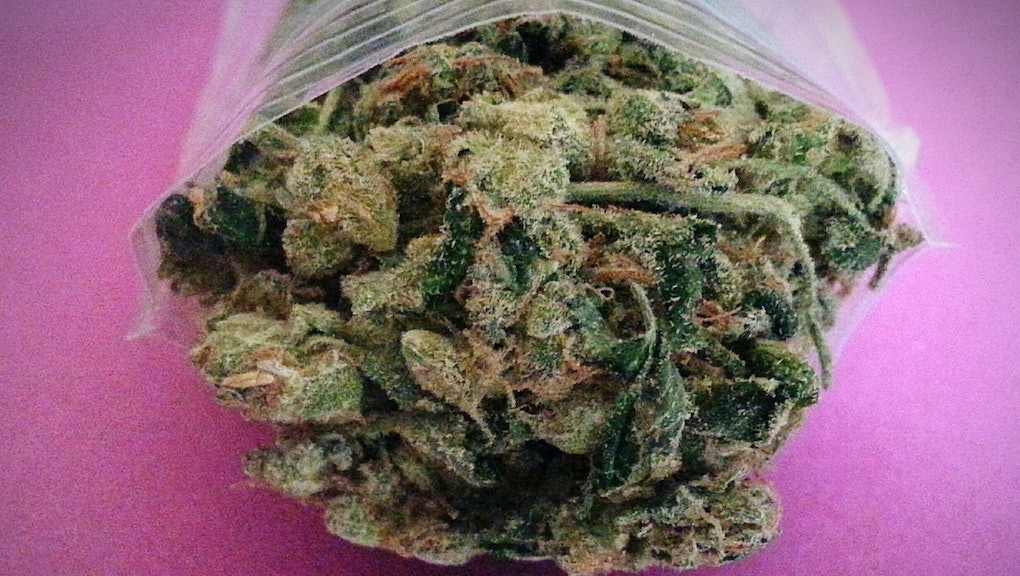 It's estimated that $1.9 billion will be spent on flowers and $1.7 billion on candy this Valentine's Day, according to a recent consumer survey. But once the flowers are dead and the candy is gone, what do you have? Nothing.

You probably should have given the gift of weed instead.

"Overall, cannabis lends itself to being a highly valued and very well-received gift. From the look and smell, to the taste on both the inhale and the exhale, to the way it enhances tactile stimuli, cannabis engages nearly all of the five senses," Evrett Kramer, the co-founder of Potbox, a San Francisco-based cannabis subscription club, told Mic.

The effects of cannabis on people's sex drives are well documented, with landmark 1984 research finding that more than two-thirds of those surveyed reported increased sexual pleasure and satisfaction from smoking weed before sex. Sex therapists are also increasingly recommending that couples use marijuana to enhance their sex lives.

According to a 2015 study by SKYN Condoms, millennials who smoke weed regularly reported having sex "several times per day," with 59% of them qualifying their sex as "amazing" or at least "very good."

"Cannabis has been shown to increase your resting and active heart rate, thus increasing circulation, which is a key component to sexual health," Kramer said. "Cannabis also promotes empathy, which is another key component to psycho-sexual and emotional-sexual health. Also, I am sure many people who would love their partner to be more focused on them during sexual play will appreciate the benefits of cannabis."

Cannabis can offer just the right amount of physical and psychological effects that can enhance physical connection between partners. Yet, different strains can lead to different experiences.

If you're looking to enjoy some herbal refreshments before V-Day sex, Kramer recommends hybrid strains that "combine the effects of both indica and sativa flowers." (Indica strains tend to produce a more relaxed high, while sativa strains tend to be more dynamic and uplifting.)

On its own, an indica strain can enhance physical connection and lower inhibitions, leading to "some beautifully unforeseen experiences between partners," Kramer said. On the flip side, a sativa strain is more energizing, creating heightened senses between partners. Combining the two strains, Kramer suggests, is ideal for sex because a hybrid offers the best of both worlds.

Christie Strong, from cannabis chocolatier Kiva Confections, agreed that a hybrid is probably your best bet. "A pure sativa can be anxiety or paranoia-inducing in those sensitive to it, while a pure indica can be sedative and make you more sleepy than amorous. A hybrid will give the perfect balance of body relaxation and mind stimulation," Strong told Mic.

If you don't feel like smoking weed on V-Day, you can also consume it in various other forms, such as edibles like chocolates or brownies. (There's even cannabis-infused lube by Foria that's comprised of coconut oil and cannabis oil.) "Rather than smoking a joint with your partner, the two of you could share a piece of chocolate in the late afternoon, and then enjoy a whole night of sensual togetherness, relaxation, giggliness, and all the other awesome benefits of cannabis edibles," Strong said.

That said, before you go calling your local dealer, it should be noted that the there are only four states where recreational cannabis use is legal: Colorado, Washington, Alaska and Oregon, as well as the District of Columbia. (Marijuana has also been decriminalized in some form in 20 other states.)

But in light of the backlash against the candy-and-chocolate-hearts-infused commercialism of Valentine's Day, as well as the growing acceptance of marijuana use among couples (hell, weed weddings are even a thing), weed could very well become a less cheesy alternative to Hallmark cards and boxes of chocolate on V-Day. As Kramer put it, "cannabis flowers make a much better gift to share than 'regular' flowers."