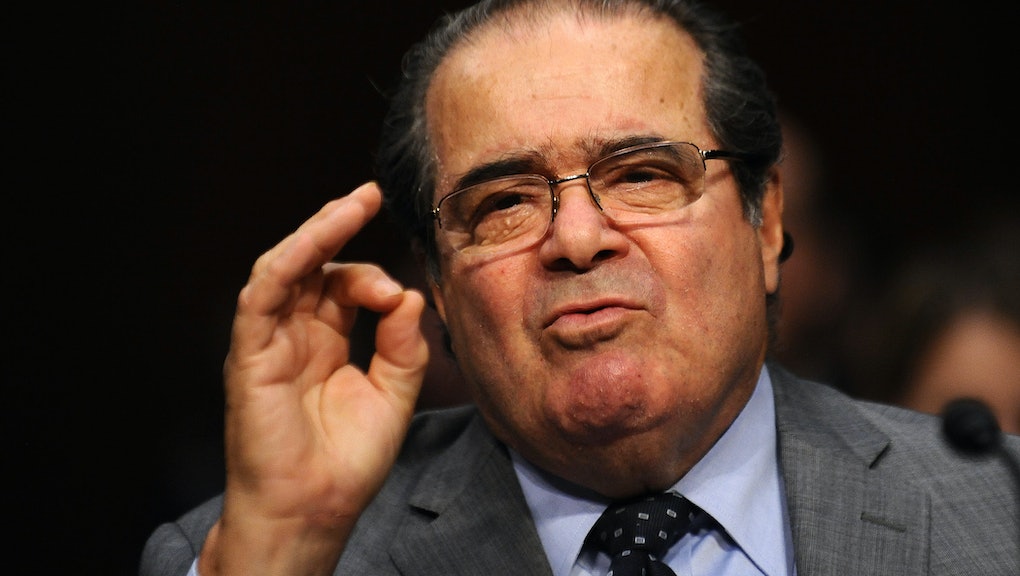 Say What You Want About Justice Antonin Scalia, He Was Great for Technology

Justice Antonin Scalia, who died Saturday at the age of 79, is remembered by many as boisterous, cantankerous and disagreeable. But if there was any force in the forward-march of modern history that could consider Scalia a standard-bearer, it was technology.

During Scalia's nearly 30-year tenure on the Supreme Court, he saw the birth of the internet, the ubiquity of smartphones and the bending of the entertainment world around digital media. And over and over again, he got it right.

When it came to police surveillance, he put hard stops on new police technologies that could subvert the Fourth Amendment in creative, dystopian ways. In the 2012 Jones v. United States ruling, a modern landmark in police surveillance, Scalia ruled that police should not be able to put a GPS tracker on you for long-term surveillance without a warrant. The Electronic Frontier Foundation is now using that ruling to go after the constitutionality of Stingray-style devices.

When law enforcement wanted to use thermal imaging devices to heat-map a home so they could find marijuana growers, Scalia helped put a stop to that in Kyllo v. United States, arguing that as technology expanded what our eyes could see, the Constitution had to expand and account for those superhuman abilities.

"While it is certainly possible to conclude from the videotape of the thermal imaging that occurred in this case that no 'significant' compromise of the homeowner's privacy has occurred, we must take the long view, from the original meaning of the Fourth Amendment forward," Scalia wrote in his decision.

"In 2011, when our industry defended the rights of creators and consumers of video games before the U.S. Supreme Court, it was Justice Scalia who authored the historic majority opinion."

Scalia stopped California from regulating video games as products like cigarettes and alcohol instead of as a medium for expression like music, books and movies. The case, Brown vs. Entertainment Merchants Association, was a turning point in video games industry's growth as a mature medium — gaming is now bigger than Hollywood.

"In 2011, when our industry defended the rights of creators and consumers of video games before the U.S. Supreme Court, it was Justice Scalia who authored the historic majority opinion," the Entertainment Software Association said in a statement after his death.

And when the major broadcast networks got the Supreme Court to decisively shut down Aereo, an service that let you watch broadcast cable on your phone or tablet and save shows for later, Antonin Scalia was one of the few people who stood against the decision, refusing to accept the rudimentary argument that Aereo was just like any other cable company.

But somewhere out there, there are police officers trying to use the most sophisticated technology of our time to peer into our lives in ways we never thought possible. And because of Antonin Scalia, someone is saying, "You're going to need a warrant for that."