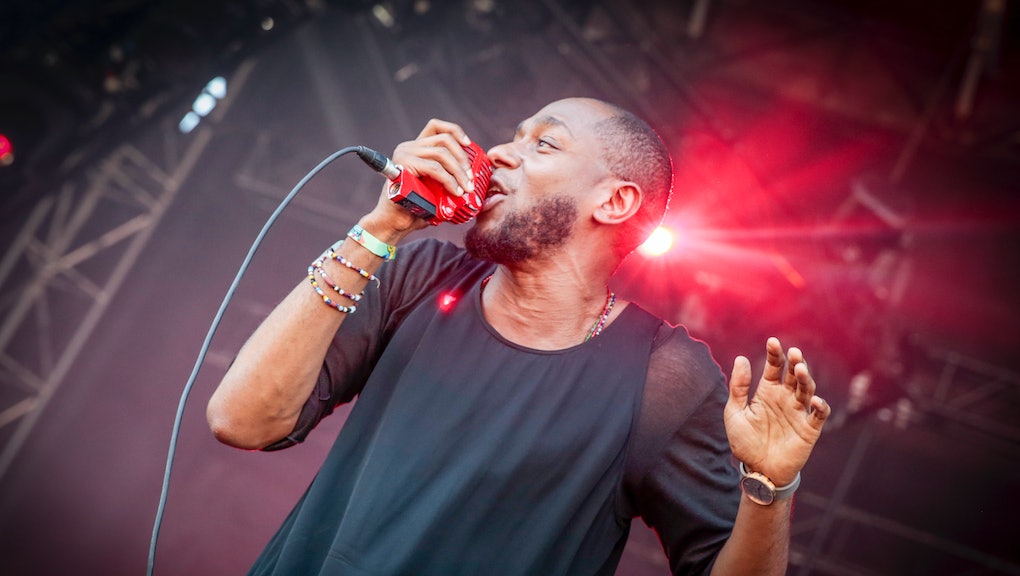 Closing out his Saturday Night Live performance of Feb. 13, Kanye West announced that his latest album, The Life of Pablo, was not only available on Tidal, but also on his website. The only thing that's available on KanyeWest.com, however, is a message from Yasiin Bey. Which is confusing for those of us who missed the 2012 moment when, in an Anchorage, Alaska parking lot, rapper Mos Def shed his longtime stage name in favor of something less tired and less likely to eclipse his true self.

"My professional name will be my chosen and my legal name, which is Yasiin Bey," the rapper said at the time. "And I don't want to have to wait for it to be in Source or Vibe or someplace. I figure, we're all here. We can see each other.

The artist formerly known as Mos Def was born Dante Terrell Smith; the name Yasiin Bey, according to Digital Trends, is a nod to his Muslim faith and, apparently, one his family and friends have used since 1999.

What's Bey saying on KanyeWest.com? Anyone who listened to the recording all the way through will be familiar with the premise. For those who didn't, here are the words (as best they can be deciphered from a crackly recording) Bey raps to the general tune of "No More Parties in L.A."

"Peace, This is Yasiin /No more parties in S.A., please tell 'em no more parties in S.A. /Ain't home arrest, I don't need to stay /I'll leave and I'll stay away /I committed no crime any place /Why these police up in my face? /Why they raiding my place? /Why I don't feel safe? This is not an expression of fear /This is just to make things clear /My intentions are pure in coming here /And that's why everything I love I hold dear /Umi's in the buidlin' /So is my wife and my children /I committed no crime /Why is the state wastin' my time /They must be out of their minds /I forgive 'em that's the spirit of divine. I just want to go where I'm wanted, where I'm loved /Stop frontin' /Where I live is my choice /You cannot mute my voice /Thank you Kanye West for being a real friend."

S.A. stands for South Africa:  The message ends with a lengthy explanation of Bey's current situation, which clarifies his rap. "At this present time, I am currently in Cape Town, South Africa and I am being prevented from leaving unjustly, unlawfully, and without any logical reason."

Like his name change, Bey's recording isn't exactly new. According to CNN, it went up around the same time "No More Parties in L.A." dropped, which means that Bey has been detained in South Africa for something like a month now.

According to the Associated Press, Bey possessed a U.S. passport and a visitor's permit when he moved in South Africa in 2013. The visitor's permit expired in 2014, which is why Bey was arrested at the Cape Town International Airport on Jan. 14, 2016: He was "violating local immigration laws while trying to leave the country," from which he is now banned (with the prospect of appeal).

He is both banned from and detained in South Africa? Paradoxically, yes. The World Service Authority issued Bey a World Passport when it turned out that he possessed neither a valid visa nor a valid U.S. passport. But the thing about a World Passport is, as Digital Trends reported, it isn't officially recognized as a legitimate document by most countries, including the U.S., the European Union, Russia, China or Japan, because it's relatively easy to procure.

Bey contends that South African authorities have wrongly deemed his passport "fictitious" and suggests that the listener look up the country's precedent for accepting the document. Indeed, on the World Service Authority's site, South Africa is the first example listed as proof that a World Passport is an acceptable international travel document.

According to CNN, South Africa's move would typically be to send Bey back to his home country. However, the rapper has apparently given up his U.S. citizenship. Because he is a man without a country, he's stuck in bureaucratic limbo.

In other, related news: Bey used the recording to make a big announcement. "I'm retiring from the music recording industry as it is currently assembled today, and also from Hollywood, effective immediately," he said at the end of his message. "I'm releasing my final album this year, and that's that."

Where he goes from here is, in every way, uncertain.