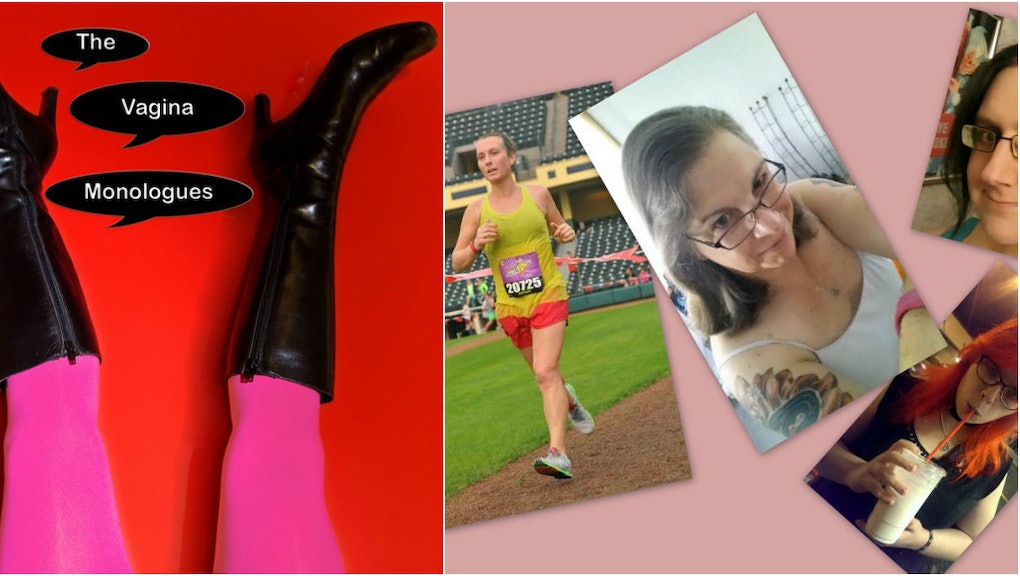 For nearly 20 years, Eve Ensler's political theater piece, The Vagina Monologues, has graced stages around the world every February. Through Ensler's V-Day organization, which licenses the show for free between Feb. 1 and Apr. 30, women speak openly about the taboos around vaginas, raising money for thousands of organizations working to end violence against women in the process. It is perhaps the most famous piece of feminist literature of the late 20th century.

However, since Ensler's first performance of the The Vagina Monologues at HERE Arts Center in 1996, the play has garnered its fair share of criticism. Feminists have criticized the show for being excessively sex-negative. Women of color have attacked the way in which the content centers on the experiences of white women, ignoring much of the violence and marginalization experienced by women of color.

Perhaps the most salient critiques focus on ways in which the play presents a narrow view of womanhood, with the perspective of trans people completely left out of story. Last year, students at Mt. Holyoke College decided not to continue staging the show over concerns about its exclusion of trans people, triggering a firestorm of social media discussion about the play's role in the feminist community.

Ensler has defended her work, stating, "The Vagina Monologues never intended to be a play about what it means to be a woman. It is and always has been a play about what it means to have a vagina." Yet while productions of the play have cast transgender performers, the original version is largely told through the through the white, cisgender lens of Ensler's own experience.

The fact that The Vagina Monologues fails to address the experience of trans people is galling in light of the fact that trans bodies, especially trans women's bodies, are still incredibly stigmatized. Trans people's genitals are the subjects of massive disinformation campaigns that portray us as dangerous predators and perverts, and jokes about how disgusting trans bodies are appear on almost every TV show. Our bodies are so taboo that men routinely murder trans women when they encounter our private parts.

With the 20th anniversary of The Vagina Monologues' premiere rapidly approaching, Mic decided to give trans people the chance to speak (and be heard) about their bodies, whether they have vaginas or not. So Mic went back to some of the original questions that Ensler posed to her interview subjects, modifying the wording to make the questions inclusive of all bodies.

Ultimately, nearly 50 trans and/or non-binary identified people answered Mic's call for responses. Some of our respondents viewed their bodies with intense loathing, their dysphoria almost palpable in their words, while others had clearly gained some measure of acceptance. Their answers were at times heartbreaking, other times quite uplifting. Many were quite funny, and all of them were intensely personal.

Our project is far from perfect: It's raw and unfiltered, and our participant pool is just a tiny slice of the trans community. Yet these are voices of real people, talking about their real bodies. Our hope is that this is a small step to demystify trans bodies and how trans people deal with them, to begin to carve out a tiny space where trans bodies are not jokes, dangerous threats, or evidence of sexual deviancy. Ultimately, these voices serve as a powerful reminder that trans bodies can be just as moving, powerful, beautiful, and worthy of love as any other.

1. What do you call your genitals?

One of the best known moments from the The Vagina Monologues is the list of amusing terms that the interviewees shared for their vaginas, like "cooter," "monkey box," or "split knish". Yet the participants in Mic's survey didn't appear to have much interest in using cutesy slang for their parts.

Nearly half preferred to either not refer to their genitals at all, or to use very neutral terms like "parts", "genitals", "bits" or "junk," or they used they used modified versions of common terms for "penis" ("girlcock", "ladydick").  Others had more negative terms, calling them a "deformity", "birth defect", or "that ugly mess."

"Most of the time, I simply *don't* call them anything.  I have always tried to phrase things in such a way that I didn't need to."

"Berginer (a word my wife and I made up years ago, pronounced `burr-JYN-er'`)."

2. What do your genitals remind you of?

"Nothing. I try to think about it as little as possible."

"Something that belongs on someone else."

"A cancerous growth that needs removing."

"A Vienna sausage and a couple of small almonds in a little jewel sack."

"An elephant trunk, or that tardigrade visualization from Cosmos, 'cause it's uncircumcised."

"A misshapen sausage. Estrogen seems to have shrunk it asymmetrically, so one end is skinnier than the other, and it looks like a badly made sausage."

"My genitals remind me of a witch's wand: a thing to be careful with, a thing often misunderstood by others, but a thing... that is empowering and enlightening."

"Soap, ideally. Nothing in particular, usually ... I mean, they smell a lot less funky than they did back in the bad old days before I was on hormone replacements, which is nice."

"Wetness. I get wet a lot and I absolutely love the wet smell of my business. I don't know how else to describe it exactly but what I can say is that they smell less musky than the nonsense they smelled like under testosterone, even when they are more pungent than usual. It's just, I guess, a lush, sexy smell."

"It sounds silly, but when their smell changed so drastically on hormone replacement therapy [HRT], it was a real bit of comfort. They smell unmistakably female now — somehow sharp and sweet at the same time... it's a small reminder how much more at home I feel now."

"Like a warming sunset cast through windows across your living room floor."

"My pussy smells like love and earth in the springtime."

4. If your genitals got dressed, what would they wear?

"Lots of black and red. Maybe something lacy."

"I'd like to think my vagina would like to wear a nice spring dress and some cute sandals. She wouldn't go overboard with accessories, maybe just a bracelet and some cute, but small dangly earrings. She'd wear sunglasses on a sunny day."

"My clit would wear a leather jacket and my pussy would wear flower petals."

"An invisibility cloak, to avoid attention."

"One of those headbands with antenna on it and a bee costume."

"My clit would wear a leather jacket and my pussy would wear flower petals."

"My junk likes being naked and I (fucking finally) love my entire body enough to enjoy being naked."

"A hooded cloak. They could show their true face to anyone they choose, but to the rest, they will just see what they imagine."

5. What's special about your genitals?

"They have a job to do, and they do it well, adapting to the changes in hormones and functions like a champ. Despite being wrong, they are still one of the greatest sources of bodily pleasure I will ever experience."

"I love how they feel now on HRT during sex. Sex has become better for now."

"I'd dream about my vulva all the time, but if I became conscious of the fact it wasn't my current reality, it would wake me up. Then, one day I went to sleep and woke up with a vulva for real. My vulva. It was bandaged up and I didn't get to see it for a week, but it was there. Once I saw it, it was bruised and swollen and a little bloody, but it was mine. And it was worth the wait."

"They're one of the most expensive things I've bought, and I'm very fond of them."

"The most special thing about my genitals is that they were part of the coupling that created my two sons."

"They're one of the most expensive things I've bought, and I'm very fond of them."

"They are a constant challenge, to myself and others. They are a defiant affirmation of my existence as a trans woman, even as I seek to continue transition."

"Prior to having surgery, nothing was special. My penis didn't really feel like something that was mine. It was just sort of there. I had no emotional attachment to it. I wouldn't quite describe it as being foreign, but it just wasn't mine. Now, my vagina is special because it's mine. It feels like mine, like a true part of me."

"She has been rather timid, and we took a long time to make friends, but now we understand each other, what we're okay with doing with each other, and how to cooperate, we are able to have a good time once in awhile."

"Answering this question made me cry because after many years of hating it, I finally absolutely love my body, including my genitals."

6. If your genitals could speak, what would they say?

"'Just because orgasming takes time, doesn't mean I'm not worth the effort.'"

"'Don't feel bad. I'm not going anywhere. I'm just going to turn into something wonderful for you.'"

"'We love you and we are sorry we have caused issues in the past. We look forward to the future — especially the furniture rearrangement.'"

"'I'm sorry that I'm not necessarily what you want, but I'm here on this journey with you. Someday, I may transform and be something different and I hope you're proud of me when that day comes.'"

"I think they would advocate that genitals are no more binary than is gender. That all genitals are unique and wonderful in there own beautiful way. They'd preach trans-genital pride. They'll create #transgenitalsarebeautiful."

"They would sing a great pain, and moan for realness and compassion. They would tell me that it is okay to feel sorrow and a want for finality... They would say, 'cry the tears you need after rape and unease hit you in powerful bouts.' The words my genitals speak burn through me and wake me everyday, so I learn to love myself again and again."