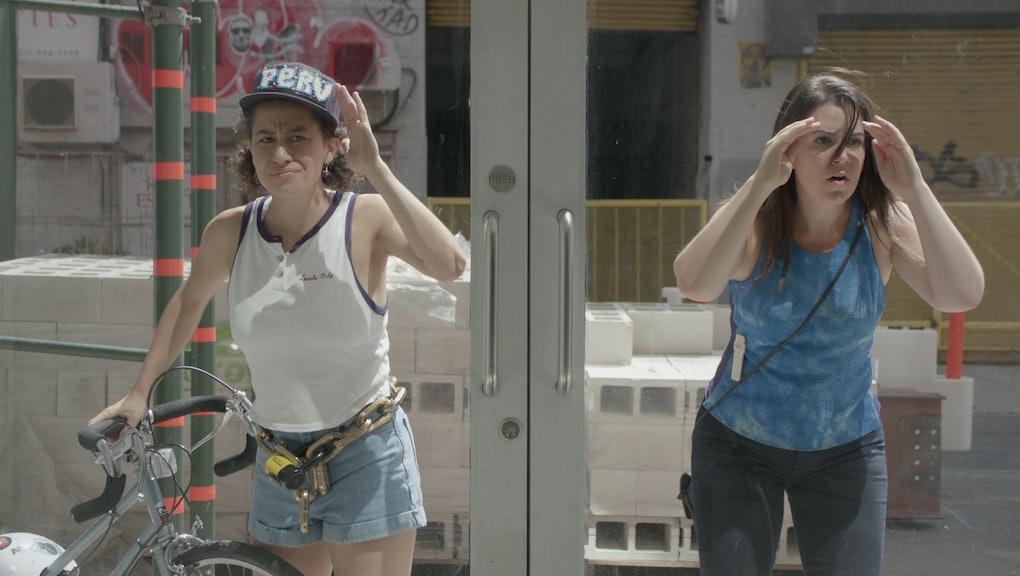 The first glimpse we got of Broad City's Abbi and Ilana during the show's Season 3 premiere on Wednesday night found the duo characteristically sitting on the toilet, wearing T-shirts with "Challah back" (like the bread) and "FBI: Female Body Inspector" emblazoned across the front.

If you have repeatedly watched every episode of Broad City since its Comedy Central debut in 2014, this should come as no surprise. Abbi and Ilana have their very own kind of style, something we'll call Don't-Give-a-Fuck fashion — or DGAF fashion. And Season 3, more obviously than ever before, is a display of what DGAF style is all about.

In the often self-serious fashion television landscape, where Olivia Pope's red coat has its own symbolism and Mad Men's fedoras signal a state of mind, Broad City's clothes are a breath of relatable, unstuffy, slightly unwashed and utterly normal air.

The show's leads, played by co-creators Ilana Glazer and Abbi Jacobson, embody the kind of style that you're probably familiar with if you've ever scoured a bargain bin at Nordstrom Rack or Urban Outfitters, or looked down at what you're wearing on laundry day. It's a type of style that says "I put these clothes on to cover my body."

"Nothing for either of them ever really matches as far as undergarments are concerned," the show's costume designer Staci Greenbaum told Fashionista. "For them, it's not part of their lifestyle. They don't pick out their clothes in the morning. You know what I mean? Not every building has laundry."

That DGAF style is so rare on TV perhaps because it is so common. Below, the most basic pillars of DGAF dressing that Broad City has taught us so far:

Refuse to give a fuck, even when the security tag on your shirt's still on.

This may seem simple, but pay attention. In just the premiere episode of Season 3, Ilana wears a hat with "PERV" in big bold letters across the front and her bike chain slinked around her waist like a belt, while Abbi trots around town in a blouse that's still got a security tag.

Over the course of the episode, Ilana's hat changes from saying "PERV" to a more loving "LINCOLN" when the two meet up with Lincoln, Ilana's kinda-sorta-sometimes-boyfriend, for his graduation from trapeze school (or something of the sort) and then "BAD" because, yeah, Ilana's a pretty bad chick. (In a good way.)

What is particularly admirable about Ilana's fashion over the course of the premiere is the consistency of its borderline inappropriateness – something the show has utilized in its fashion choices from the very beginning. (Remember that entirely sheer lace top Ilana wore to the shiva, or her Fruit Loop leggings?) It's like they throw things on her body and hope for the best. And if she ends up getting stares or almost getting arrested for it, that's OK, too.

Stop at nothing short of violence for a great discount.

In Wednesday's premiere, after Abbi's shirt gets ruined by a (spoiler alert!) bum in a sewer, she has to find a fancy top for an art opening. Naturally, she knows of a super cheap sample sale nearby. Once they get there, sure, it's absolute tyranny, but Abbi ends up walking out with a blouse for 90% off.

That in itself is DGAF fashion incarnate: braving terrible conditions in order to get a shirt for less than $20. It's the style of young people who give way more shits about what's on sale than what's on the runway.

As Ilana elegantly put it in the Season 3 premiere: "Honestly that's the best time to shop: desperate and in a time crunch."

It's OK to rewear. In fact, be a repeat offender.

Most TV show characters have a seemingly endless supply of new clothing pulled from Mary Poppins-esque armoires. But a critical pillar of DGAF dressing involves repeating the same outfits — something the Broad City girls have elevated to an art form. Ilana's strappy bralette has become a regular character since Season 1 ...

As has Abbi's blue bandage dress ...

Like most women who don't have personal stylists dressing them every morning, Abbi and Ilana repeat outfits, and they really don't care what you think about it, which leads us to a deeper point about how these women dress.

The only person you need to dress for is you (and maybe your BFF).

They are dressing for themselves to look the way that they want to look. And that not only matters because it's inherently feminist, but also because it's showing viewers that women can be completely self-confident and proud without any male approval.

That especially stands out in an age of television when young women — understandably, thanks to centuries of social pressure — spend a whole lot of time trying to dress alluring or sexy. Just compare the two to many of the female characters you've seen on shows like Pretty Little Liars, where women seem to dress for the admiration of their male counterparts. Broad City administers a distinctly empowering fashion antidote to that understandable mentality.

What Broad City shows is that when you dress the way you truly want to dress, whether that means booty shorts or cardigans, you are at your best. Pretty frankly and obviously, Ilana and Abbi don't give a fuck. Sure, they get kicked out of restaurants and accountant offices semi-regularly, but they are women of their own making. And isn't that really what feminism is all about?