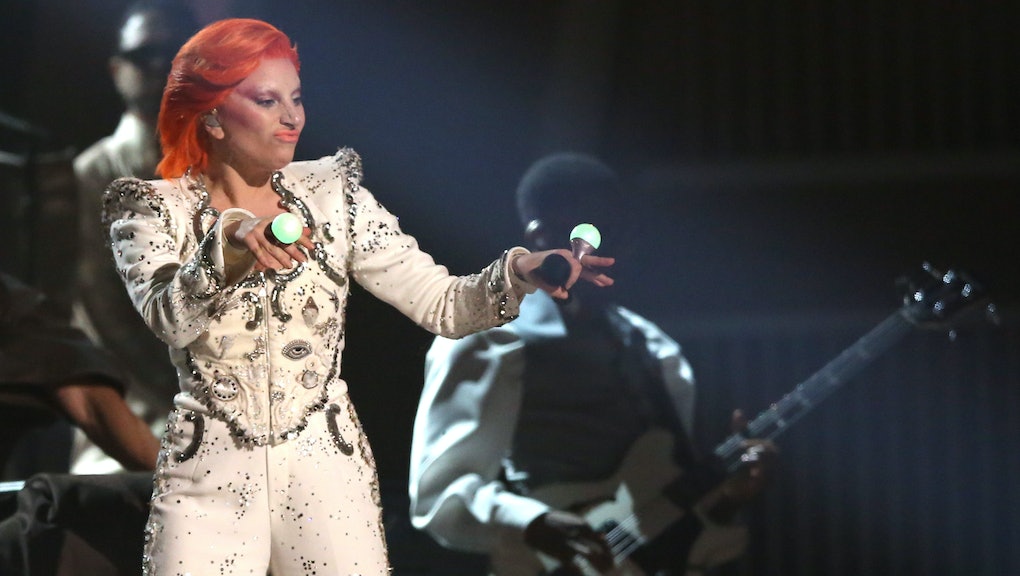 When David Bowie died, the music world had a small nervous breakdown. Artists and fans mourned for days, remembering the musician who never ceased to recreate himself and his work. Some of the proposed tributes had fans feeling a bit cagey. Their wounds were a little too raw to handle a Kanye West tribute album, a Croc #brand tweet or a Smash Mouth cover.

Lady Gaga was potentially another one of those tragedies waiting to happen. But when she took the Grammys stage, she delivered what she needed to.

Gaga ran through a medley of "Space Oddity," "Changes," "Ziggy Stardust," "Suffragette City," "Rebel Rebel," "Let's Dance" and "Heroes" with ease, changing from one elaborately campy costume to another. She rocked out on a walking droid like piano that would have you know a Ziggy Stardust-era Bowie would have drooled over.

Yet before Gaga even took the stage, she had already slayed its red carpet. She showed up wearing a reinterpretation of David Bowie's classic "Life on Mars" regalia.

She's been working on getting herself in character for days. Ahead of the show, she got herself a tattoo of David Bowie's face on her ribs, sharing video with her fans on Snapchat to the great delight of fans.

That excitement continued straight through her performance, as the Little Monsters expressed on Twitter.

Not everyone was feeling it, however. Bowie's shoes are two of the hardest in music to fill.

Gaga also recently performed at the Super Bowl, singing the national anthem in an epic pant suit. Later this month, she'll perform at the Oscars, which will make her the first artist to ever perform the Grammys, Super Bowl and the Oscars all in one year.

Watch part of the performance below.