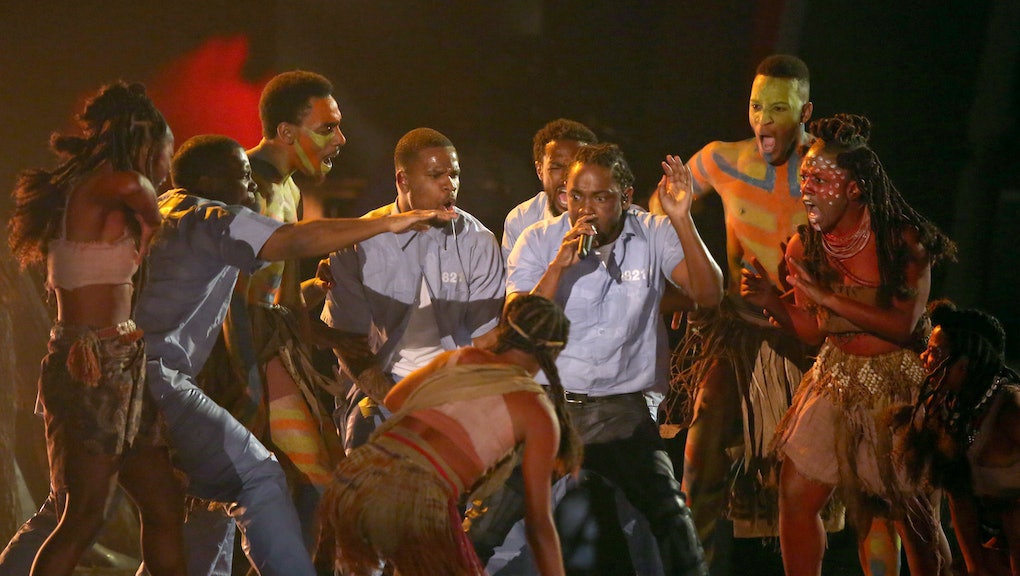 Kendrick Lamar Took the Stage at the 2016 Grammys and Twitter Agrees: It Was Lit

Kendrick Lamar took the stage at the Grammys Monday night and lit it on fire — literally and figuratively. From the first moments of his "Blacker the Berry" performance, Lamar exploded an otherwise sleepy ceremony. He and his chain gang filed down a makeshift prison corridor, breaking their bonds and into dance before moving to "Alright." A towering bonfire erupted behind Lamar as his dancers built momentum.

"I'm African-American, I'm African," Lamar rapped, closing out his performance with a map of Africa as a backdrop, "Compton" written across it. It was a powerful message about racial equality and social justice. And Twitter responded with a thunderous round of applause.

Some users praised Lamar's taking his powerful political message to a highly publicized event, a la Beyoncé with her Super Bowl performance of "Formation," a song heralded as a woke AF celebration of blackness as soon as it dropped on Feb. 6.

But overwhelmingly, the internet's reaction was both excited and grateful — that Lamar had done in a handful of seconds what no other musician had managed in two hours of music. It had been a pretty uneventful ceremony before Lamar lit it up.

This woman, a Twitter anomaly, somehow managed to keep her socks from getting blown off by Lamar's mic drop of a performance. But it did knock her off her feet.

The final verdict? Kendrick Lamar: on fire and winner of music's biggest night.