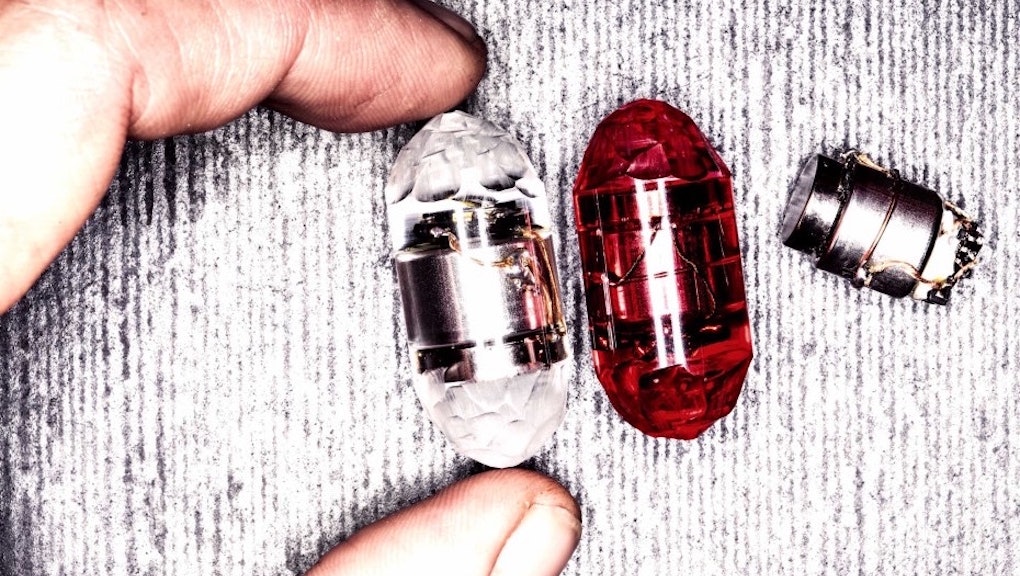 We've all been in the belly of the beat. But have you ever had a beat inside your belly?

Czech artist Jan Strmiska, who goes by Jan Poope, created a crystaline device called Audiopill, a capsule nearly an inch and a half long that pounds an EDM beat into the inside of your body for the better part of a day once you've swallowed it. It's like Sartre's "No Exit," only hell is a rave.

The Audiopill, which was created for Poope's "Prolapse of Love" series, is controlled by a magnetic remote, which can switch between three levels of speed to match the song you're bopping to. The battery-powered pill lasts for 10 hours of "extacy [sic] and madness."

"Audiopill (pill) will make you feel like you are standing in the middle of a concert hall with a powerful audio system inside your body," Poope wrote. "Or like you are standing in a factory workshop full [of] metal working machines and ramming an impact drill into your stomach. The only difference is there's an absolute silence all around and you are experiencing the music in perfect privacy and only from the inside."

"...many doctors and four polymer experts who were consulted on encasement materials warned the author 'to never ever swallow anything like this.'"

As it moves through your body, the pill allegedly causes an enormous pain that you hopefully adjust to for the rest of the 10-hour ride. So this "pill" hurts, lasts for an uncomfortably long period of time and is enormous. But is it safe?

"During development of the device, many doctors and four polymer experts who were consulted on encasement materials warned the author 'to never ever swallow anything like this,'" an Indiegogo page for Audiopill says.

Poole launched the Indiegogo project to fund a mass-produced batch of Audiopills, because right now, his workshop for making them looks like this:

Indiegogo is covered with projects like this — hardware devices with impractical promises that are created to extract money from the hopeful masses without delivering meaningfully on their promises. But Poope's penniless project looks less like a well-crafted scam and more like a provocative, dark experiment.

Which is to say: It's entirely possible that this project is an elaborate hoax. Or maybe that's just what we hope.