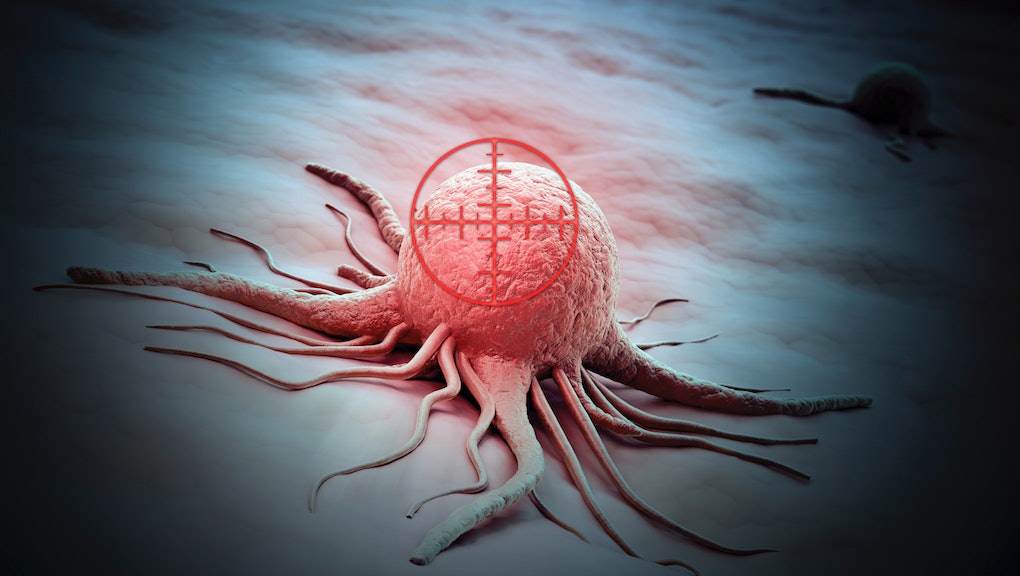 Scientists Have a New Way to Fight Cancer: Blowing It Up

Oncologists may have a new way to kill cancer — by bombing the crap out of your insides.

The current procedure goes like this: Oncologists surgically remove as much of a tumor as possible, then follow up that procedure with chemotherapy to get rid of any cancer cells still hanging out in the body. These are what's called microscopic residual disease, which can still metastasize and kill you. The problem, though, is that trying to eliminate the leftovers doesn't always work, and cancer can recur.

A paper published in the journal Nature Nanotechnology details an answer to that problem. Researchers from Rice University in Texas found that they could use nanoparticles sort of like Trojan horses to get inside a growing tumor and make it explode from the inside.

The experiment: Scientists sent clusters of gold atoms, called nanoparticles, into the bodies of mice to be absorbed by the tumor, which was actually made of a human cancer cell often found in head and neck tumors. Once the nanoparticles were inside, the team used a laser pulse to track and then hit the particle clusters with infrared light. That light vaporized the water near the clusters, which created vapor bubbles just strong enough to explode and rip up the cancer cells.

It sounds effective. It's essentially surface mining inside the body. But according to Dmitri Lapotko, head of laser science at medical nanotechnology group Masimo Corporation, the slash-and-burn approach can get messy without some workarounds.

The challenge: Lapotko told Science that although the method is effective with the gold cells, they can also surround normal cells. Like with chemotherapy, healthy cells are likely to get severely damaged by the nanoparticle explosions. Plus, the heat it takes to vaporize the water near the clusters isn't specific enough not to heat up vital organ tissue or other life-dependent things like nerves and arteries. It's like trying to save a hostage from a bad guy using a grenade.

To get around this problem, the team outfitted those gold nanoparticles with antibodies that attach themselves to the cancer cell receptors. Then, using laser pulses instead of a constant beam of light, the team nuked the water molecules around the cancer so quickly that a bunch of the reactions ripped through the leftover cancer cells. In the animals observed, 100% survived, cancer-free.

This could be a huge deal for oncology. Cancer returning in the human body is a result of cancer cells that a surgeon didn't find in the first go. If teams like Rice's can simply go in and blow up any of the stragglers, without touching, say, your heart or liver tissue, we could finally say goodbye to cancer rearing its ugly head twice in one body.