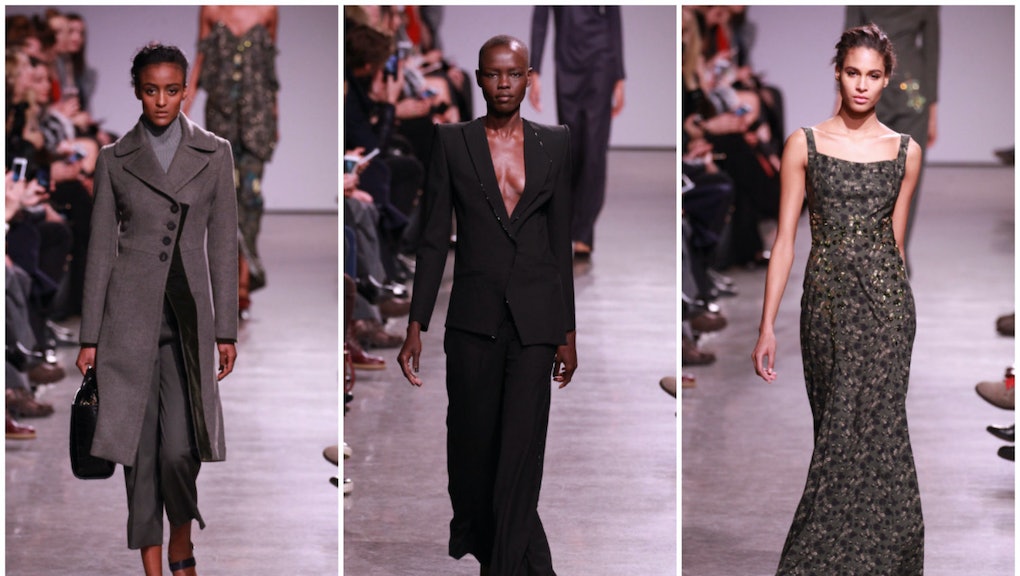 For many, diversifying fashion's runways has been a slow-moving, seemingly impossible task. But this New York Fashion Week, which is currently underway, might have finally brought some breakthroughs.

There was Kanye West, who hired almost all models of color to show off Yeezy Season 3. There was the Chromat show, which cast models of all races, sizes and gender identities. There was Rihanna, who embraced models of color for her collection with Puma. Then there was designer David Hart, a white designer, who decided to use exclusively black models for his Jazz era-inspired showcase.

But the least expected move so far came on Monday night from designer Zac Posen, a favorite among the Hollywood crowd, whose models were almost entirely women of color:

According to Fashionista, Posen's collection was inspired by Princess Elizabeth of Toro, a lawyer from Uganda who was the first East African woman to ever be admitted to the English bar.

"Within this global environment, diversity is very important and it is something that has always been equally important to me as well as a key component of my collections whether it is shapes sizes or skin color," Posen told Mic. "We live in a diverse world and it is essential it is represented within the fashion industry."

Just take a peek at the show's casting sheet, which included familiar faces such as Aya Jones and Grace Bol:

The casting decision wasn't just about Princess Elizabeth of Toro. It was about sending a clear message: Black models matter. In the days leading up to the show, Posen posted a picture of himself on Instagram with a black bag painted with the words "black models matter" right on the front.

The artist behind the bag is Ashley B. Chew, who was photographed carrying it in September to fashion week. Once it hit social media, it sparked a conversation (and a hashtag, of course) about diversity in fashion that has only grown stronger, with Posen himself using the hashtag in the caption of his Instagram.

In early October, once New York Fashion Week had wrapped up, the Fashion Spot released its diversity report on the models that walked during the major biannual event and found that just 10.4% of models who walked that season were black. In a day and age when #OscarsSoWhite is trending, numbers count.

As Chew noted to the Huffington Post U.K., "It's refreshing to walk a runway that celebrates all types of beauty, but this is not always the case. I have seen many shows over the years, and the ethnic model ratio is still very poor with some shows."

So far this season, as seen on Chew's Instagram, the bag has been one of the week's most photographed accessories, seen on the arms of in-demand models such as Shaun Ross and Selita Ebanks, as well as the pioneering black model Bethann Hardison.

This is precisely why it matters that a major fashion designer, especially one whose clothes often end up on the red carpet, took it upon himself to hire mostly black women for his new collection. It didn't seem like a gimmick so much as an effort true to his inspiration — as Posen explained in his show notes, he wanted the models to embody Elizabeth's "kind nature, stunning appearance and exceptional intellect."

Turns out, that can be done with a variety of models, of various colors. Posen's show proves it's not impossible to stage a beautiful, visually appealing fashion show with a group of models of any and all colors. If anything, it makes a show more representative of the women who will be buying these clothes or rocking them on a red carpet sometime very soon.