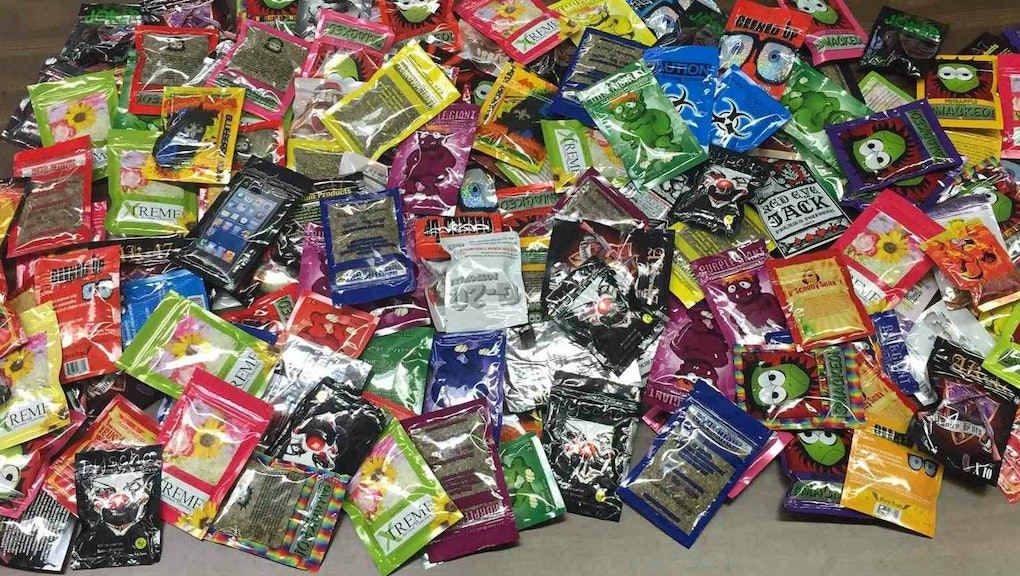 What Is Synthetic Marijuana, and How Is It Different From Real Marijuana?

Below the surface of a nationwide debate over legalizing marijuana is an epidemic of synthetic cannabinoids, which have been sending patients to the emergency room by inducing strokes, heart attacks and kidney failures, according to KCTV5. One of the most recent surges is occurring in St. Louis, where more than 100 patients have been treated for its usage in the past two weeks.

Synthetic marijuana also goes by K2, spice, crazy monkey and Scooby snacks, according to the Boston Globe. Despite the misleading name, this designer drug is far removed from actual cannabis; rather, it's a highly toxic laboratory-made psychoactive chemical sprayed onto dried, shredded plant material, according to the National Institute on Drug Abuse. Most of the time, no one knows exactly what they're smoking, the Boston Globe reported.

"You are experimenting with unknown compounds," Dr. Jeff Lapoint, a medical toxicologist and an emergency room doctor, told Forbes. "You're being a guinea pig. It's not the same chemical, even among same brand. Medically, these drugs are a world of difference from THC."

The high is unpredictable and often results in dangerous health effects, such as seizures, agitation and hypertension, a 2013 study found. Psychotic effects include suicidal thoughts and paranoia, according to the National Institutes of Health.

As the active ingredient in marijuana, tetrahydrocannabinol, or THC, is a cannabinoid that partially binds to the cannabinoid receptor type 1, or CB1, in the brain, Forbes reported. Synthetic marijuana mimics the effects of THC, except it has such high efficacy and potency in activating CB1 receptors that the body doesn't know how to metabolize it. Since CB1 receptors are also located in multiple regions of the brain, multiple parts of the brain can come under stimulation.

"Pot users are usually interactive, mellow, funny," Dr. Lewis Nelson from New York University's Department of Emergency Medicine, Division of Medical Toxicology told Forbes. "[Every] once in a while we see a bad trip with natural marijuana. But it goes away quickly. With people using synthetic, they look like people who are using amphetamines: They're angry, sweaty, agitated."

More than 80% of consumers smoke the drug, a 2015 Centers for Disease Control and Prevention survey found.

Synthetic marijuana is a legalization loophole gone wrong. In 2012, Obama signed the Synthetic Drug Abuse Prevention Act, making it a Schedule I drug (like marijuana is). Since 2011, every single state has passed a ban on at least some compounds of synthetic drugs, but manufacturers are getting around the law by changing just one molecule, creating a similar and now legal compound, according to the New York Times.