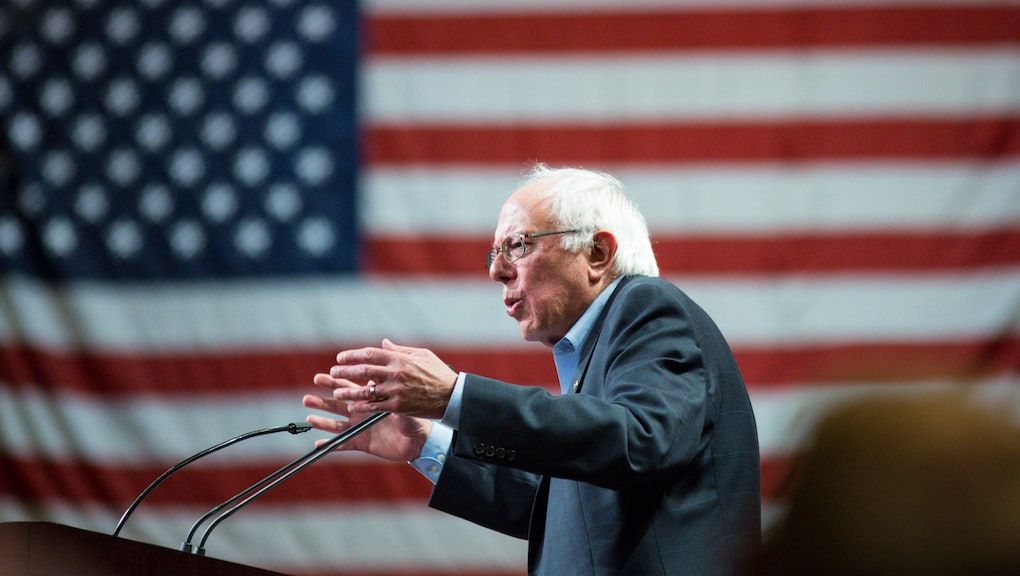 Thomas Piketty, perhaps the most influential economic thinker of the left in the Western world, is impressed by the rise of Sen. Bernie Sanders.

In a post for Le Monde republished on Tuesday by the Guardian, the French economist outlined why he felt the populist senator's ascent spells "the end of the politico-ideological cycle opened by the victory of Ronald Reagan at the 1980 elections." Piketty argues that regardless of Sanders' fate in this particular contest, he has created an opening for similar candidates in the future —"possibly younger and less white" — who could successfully make it into the White House and "change the face of the country."

What's most interesting about Piketty's analysis is that he doesn't see Sanders as following in the footsteps of Europe's social democratic models, but rather leading the United States toward a possible return to the nation's pioneering 20th century experiments with extremely progressive taxation and social spending.

America's golden past: Piketty points to the fact that, prior to Reagan, 20th century fiscal policy in the U.S. was aggressive in taxing the wealthy — much more so than the European counterparts that American leftists are so fond of looking to for inspiration today.

"In the interwar years the country invented a highly progressive income and estate tax and set up levels of fiscal progressiveness never used on our side of the Atlantic," Piketty wrote. "From 1930 to 1980 — for half a century – the rate for the highest U.S. income (over $1 million per year) was on average 82%, with peaks of 91% from the 1940s to 1960s (from Roosevelt to Kennedy), and still as high as 70% during Reagan's election in 1980."

Those rates — which refer to marginal income tax rates, not the rate at which every dollar someone earns is taxed — played a tremendous role in creating social equality and helped provide crucial government revenue for robust social programs that were introduced during Franklin Roosevelt's New Deal and Lyndon Johnson's Great Society.

The U.S. also instituted estate taxes (federal taxes on property transferred from someone who has died to their heirs) that were also extremely high and dwarfed rates in France and Germany.

That all changed after Reagan won the White House. In a bid to "restore a mythical capitalism to have existed in the past," as Piketty put it, he took an axe to the tax code and lowered the rate for the highest incomes to 28%.

Third way politics: Since Reagan, the Democratic Party has largely operated within the paradigm carved out by Reagan: very high tax rates are un-American; keeping the deficit low is of paramount importance; and spending on social services are worthwhile but should not be overly generous. In the 1990s Bill Clinton, who once famously declared that "the era of big government is over," spearheaded the Democrats' attempt to adjust to this overarching fiscal vision and only gently challenged Reagan's tax parameters. And Barack Obama has not sought to alter that status quo. The top tax rate now is just under 40% — a far cry from the top income tax rate of over 90% that existed during the time of Dwight Eisenhower.

For Piketty, Clinton is "another heiress of the Reagan-Clinton-Obama political regime," while Sanders represents a meaningful break from it.

"Sanders' success today shows that much of America is tired of rising inequality and these so-called political changes, and intends to revive both a progressive agenda and the American tradition of egalitarianism," Piketty wrote.

Sanders has his work cut out for him this primary season, but even if he loses the race for the nomination, it seems his popularity already represents a victory for his ideas — and a mighty blow to advocates for the political status quo.