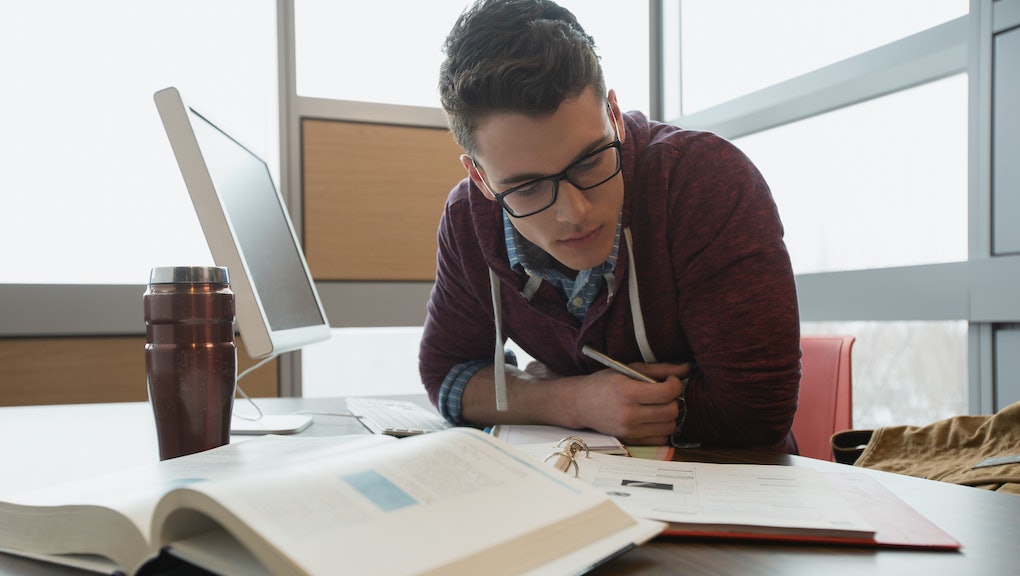 This Is What Adderall Does to Your Brain, According to Science

Adderall and Ritalin, the study drugs of choice in universities around the country, will let you write a physics paper from sundown to sunup. The downside? You might forget to eat, poop and have sex.

First synthesized in the 1940s to treat fatigue, depression and psychosis, Ritalin evolved from a drug to keep people happy into a drug to keep kids focused. In the '90s, Ritalin production rose 500%. According to one study, in the mid-2000s, an estimated 30% of students had used attention deficit hyperactivity disorder stimulants non-medically.

So what are study drugs really doing to your brain, and why? And do the benefits of popping one before a test outweigh the health risks?

The short-term benefits of Adderall are scientific but not secret: It's an amphetamine, so it raises your dopamine and norepinephrine levels throughout your brain.

When Adderall hits the brain in the right spots, the result is usually beneficial: better focus, better wakefulness, less impulsivity and less depression. But doctors don't always know what parts of the brain are being affected and how.

Clifford Segil, neurologist at Providence Saint John's Health Center in Santa Monica, told Mic that when doctors prescribe Adderall, "we're sort of carpet-bombing." The drug doesn't concentrate on just the parts of the brain that need medicine, he said. It hits the whole thing — like cocaine.

When Adderall works properly, according to Segil, it triggers the neurotransmitters in the prefrontal cortex, an area responsible for executive functioning, thus improving your concentration and focus. Then it triggers dopamine in the basal ganglia, which facilitates calm and can alleviate hyperactivity and impulsivity. And if dopamine hits the hypothalamus, the area of the brain responsible for hormone production, it can even alleviate depression.

Dr. Tim Legg, director of health sciences at Touro University Worldwide, told Mic that Adderall can impact more areas of the brain than the aforementioned ones in charge of focus and calmness. Legg says it spurs activity in the dorsolateral prefrontal cortex, striatum, thalamus and anterior cingulate cortex. The hypothalamus, just below the thalamus in the brain, is part of what regulates your hormones — meaning your height is at risk. "It's argued that [Adderall] suppresses growth hormone, which can result in decreased growth," Legg told Mic. "Experts give children 'the summer off' of the drug to allow growth to 'catch up.'"

Dr. Jeremy Coplan, a professor of psychiatry at the State University of New York Downstate Medical Center, says the biggest concern with prescribing Adderall is that it's prescribed without fully understanding the patient — like someone with a mood disorder. "You have to stabilize a patient's mood before you can give them stimulants," he told Mic. "Stimulants are usually very effective when all you're treating is ADD. But a lot of your patients will have some mood disorder, too. The number of complicated cases like this is, unfortunately, very high. And using stimulants shouldn't be a trivial prescription."

Some people who've taken Adderall for their ADHD also reported low libido, making drugs like Viagra ineffective because they don't necessarily affect the actual desire for sex. In other cases, people taking Adderall reported sleep disturbances, like difficulty falling asleep and staying asleep. And, when you try to kick the habit, withdrawal symptoms can include panic attacks, depression, intense hunger and suicidal thoughts, which is why you can't just stop taking Adderall cold-turkey.

Even though Adderall fits into the same family as methamphetamines, doctors have trusted it for years and still use it on a long-term basis for some young adults. "It's not unusual for a child to use Adderall for ADHD into their adolescence," Pat Allen, executive director of nursing services at Summit Behavioral Health, told Mic.

What Happens When We Adapt to It

There's a problem with taking a drug consistently for months or years at a time: You adapt, and your brain gets used to a typical dose. So much so that you need to up the dosage exponentially based on how long you take it. "Doing that makes your heart work too much," Segil told Mic. "You need to check that it isn't revving up your liver." When your liver is "revved up," it can't keep your blood nearly as clean, which means your blood is taking on toxins, and you end up with symptoms like headaches and chronic fatigue.

However, the bigger issue is what comes from adapting to the drug. After a while, people won't solve their Adderall cravings by taking more Adderall. Or the patients will be undiagnosed cases like those Coplan described, and the Adderall won't be able to stabilize them into adulthood. Soon, they'll reach for something better — or worse.

"I think it's a slippery slope," Segil told Mic. "I don't think Adderall's a gateway. If you aren't snorting it, or taking it to a party, it's safe to use. The problem is many people choose to misuse these substances. And when you do that, it's a gateway to something else."

"It's not unreasonable to say you get used to it," Segil continued. "I think yes, if you use [it] continuously, the expectation is you may need to use something stronger later."

This article was originally published on Feb. 16, 2016