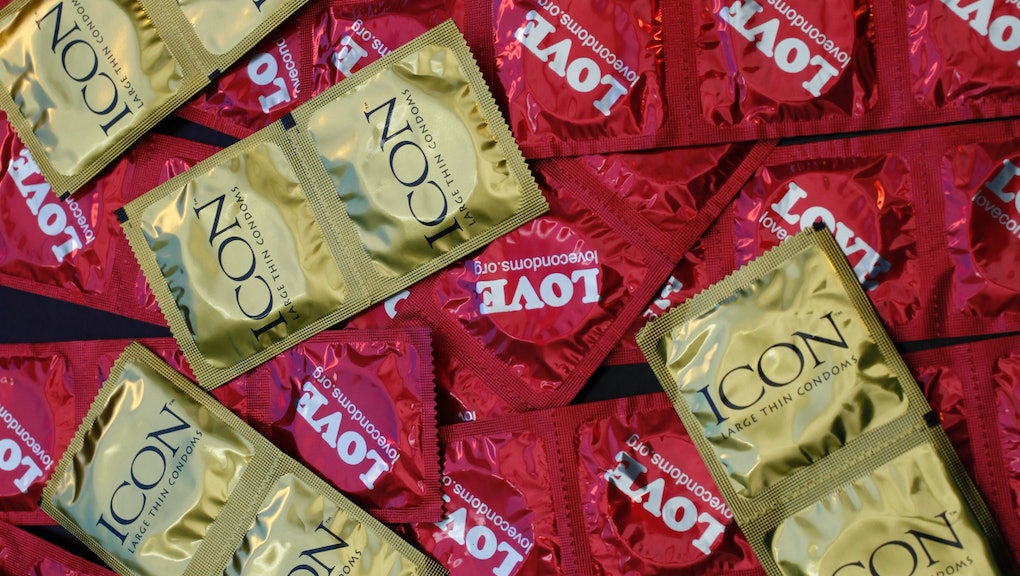 Since the Food and Drug Administration approved the pill in 1957 — for menstrual disorders, a loophole women readily identified — birth control has been women's business. The option to decide when we want to have children is one few contraceptive-using women would complain about, but the fact that, in 2016, women still foot the bill on birth control seems unfair.

True, the Affordable Care Act has, in theory, made birth control methods free for all users, but the reality is, not all plans cover all types of contraception. Many women still pay something for birth control — and the cost adds up.

For the sake of example, let's again consider the pill, which remains the most post popular contraceptive method. If a woman pays $20 for a pack of pills, that means an annual $240 out-of-pocket expense. If the woman takes the pill for 10 years, that's $2,400 in contraception fees; for 20, that's $4,800.

Read more: Here's What It's Like to Be Slut-Shamed for Trying to Buy Birth Control

Hidden costs on women's products are nothing new. But should contraception really be considered a women's product? Mic spoke with Aaron Hamlin, executive director of the Male Contraception Initiative, which helps support and fundraise for researchers working to bring contraceptives for men to market worldwide, and David Sokal, who worked for some 10 years as a vasectomy researcher before he retired and became chair of the initiative's board.

Hamlin and Sokal agreed: Viable methods of men's birth control exist, and what's more, there's every reason to believe that men would be receptive to their own forms of contraception. Sokal told Mic that, in the past, men have used what's been available to them. Why should a pill be any different than, say, a condom?

"Before the pill [for women] was approved, the most commonly used contraceptive between married couples was the condom," Sokal said. "I believe men will use a contraceptive if they have a decent choice."

Hamlin referred to recent data from the journal Human Reproduction, which indicated that about half the national male population would be interested in using a pill for men. "What's interesting about that is it's likely an underestimate," he said, "because in that survey, they asked about hormonal methods." Hormonal methods, however, aren't the main avenue of interest for researchers because hormones don't function the same way for different sexes.

"For women, very small doses of hormone can fool the ovary into thinking a woman is pregnant," Sokal said. "But for men, there's no normal physiologic state where the testes stop producing sperm, so you have to really overdose the male body with hormones to stop sperm production."

Efforts at producing a hormone-based contraceptive have, in the past, used high doses of testosterone to suppress sperm production, which wasn't ineffective, but caused subjects to break out and put on weight. The excess of testosterone could also cause the prostate to swell and the liver to malfunction. These side effects could be mitigated with injections of progestogen, as a study published in 2006 found, but according to Sokal, the most promising prospects on today's market interfere with sperm's motility.

Gendarussa, an herbal pill, is one such prospect. Using extract from the Justicia gendarussa plant, it appears to interfere with an enzyme on the sperm head, preventing swimmers from penetrating the egg. Bambang Prajogo, the head researcher behind the gendarussa pill, told USA Today that the product was 99% effective. According to the Male Contraception Initiative, it's been through two phases of clinical trial: 2009's phase one tested 32 men; phase two tested 80 men in 2010 and 186 men in 2012. One pregnancy occurred between the three test groups.

Eppin Pharma is working on a drug that would bind to a protein found on the surface of sperm, Eppin, keeping it from swimming and, by extension, fertilizing the egg.

A recent study from Osaka University in Japan made headlines in October, when researchers found that two immunosuppressants, cyclosporine A (CsA) and FK506, could render male mice infertile. CsA and FK506 inhibit calcineurin, an enzyme found in sperm — and elsewhere in the body, as Sokal pointed out, so isolating the sperm-only enzyme would theoretically be difficult. But scientists at Harvard University, for example, have identified proteins exclusive to sperm that hold promise for motility-targeted birth control.

There is, however, a simpler, non-pill option: Vasalgel, a polymer gel that's injected into the vas deferens, similarly to India's RISUG. It doesn't prevent ejaculation; seminal fluid can pass through its barrier, but sperm can't. The result, to put it unscientifically, is that Vasalgel men shoot blanks. Ideally, it will be reversible — test rabbits have had their impotency reversed with a sodium bicarbonate injection — but its efficacy in humans hasn't yet been established. For now, it's best considered a vasectomy without the snipping.

So given all these options, what's the holdup? According to Sokal and Hamlin, the single greatest obstacle standing between men and contraception — be it pill, gel, whatever — is a lack of funding.

"The average cost of getting a pharmaceutical or medical device to market is enormous, and the resources just aren't there for the researchers right now," Hamlin said.

"If funding for male contraception remains at its current level, it's probably 20-plus years before we get a male pill," Sokal said.

Hefty sums do go into contraceptive initiatives — female contraceptive initiatives. And that's not a bad thing, but it does crowd male options out of the market. As Priceonomics reported in October, pharmaceutical companies producing birth control have little reason to fix something that isn't broken: They could get behind any of the above methods, but doing so would "cannibalize their existing products." Just because Big Pharma can do something doesn't mean it will.

Women, then, got the short end of the stick: Because female contraception is more profitable, drug companies would prefer to make only that. Which sounds like an extension of the so-called pink tax, another added fee that women pay by virtue of having uteruses. But as it turns out, that tax can affect men too.

Some women can't take the birth control methods currently available. Some women who do use contraception do so for personal peace of mind: Condoms are all well and good, but they aren't 100% effective, so a backup is both prudent and comforting. Logic suggests sex-having men would feel the same way.

Men have tended to maintain an interest in contraception because of the role they play in conception, Elaine Lissner, founder of the Parsemus Foundation, the producer of Vasalgel, told Priceonomics. They will tend to do their part to prevent pregnancy from happening, she said, echoing Sokal's sentiments.

"Between condoms and vasectomy, men are already covering about a quarter of the country's birth control," Lissner said. "Maybe generations ago you could say men were not interested, but that's not a thing today, and certainly not in developed countries."

As it stands, men have only one contraceptive method available to them, other than condoms: vasectomy, a (usually) irreversible procedure. About 500,000 vasectomies nationwide are performed each year. And as Hamlin and Sokal pointed out, they aren't covered by the ACA as birth control is supposed to be. The procedure can cost between $600 and $2,000. As long as we continue to keep men's and women's reproductive health in separate boxes — as long as we keep the ladies-only label on reversible contraception — everyone pays the (too high) price.

The Male Contraception Initiative has launched a petition on Change.org to have vasectomies added to the list of preventative services the ACA will cover. So far, both men and women are voicing their support of the initiative, in exactly the terms one might expect if what Hamlin, Sokal and Lissner say is true: that both men and women who want contraception want it for both sexes.

"I believe that both women and men have the right to decide on the timing and number of children they have," John, a commenter on the Change.org petition,said. "Vasectomy is safer and lower cost than tubectomy."

"I'm signing because I am a healthcare provider who firmly believes that family planning is an equal right and responsibility," another user, Ashlie, wrote. "Men and women should have access to contraceptive options in order to determine if and when they want to reproduce."