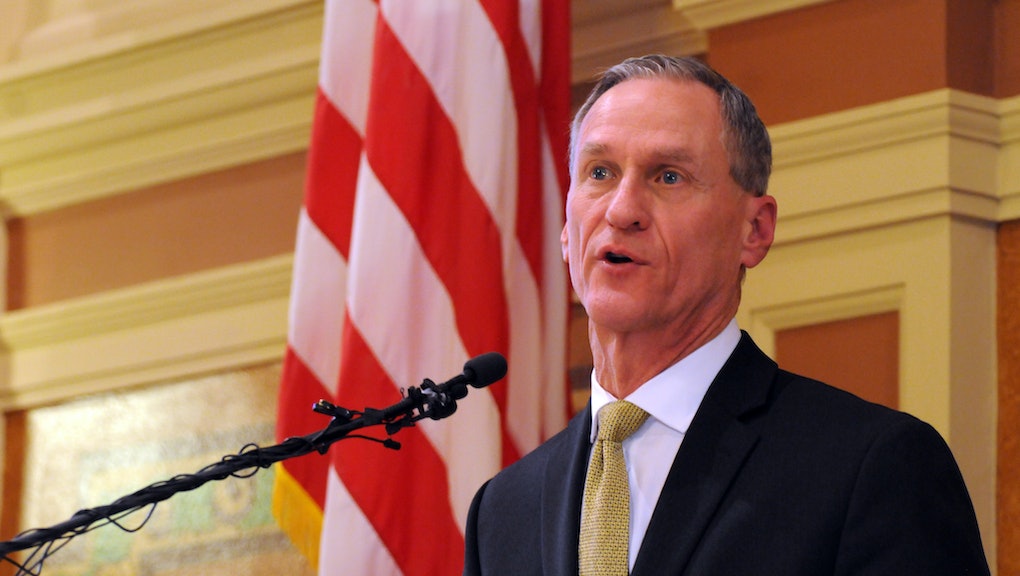 The South Dakota Senate voted Tuesday 20-15 to make it illegal for transgender students to use bathrooms that correspond with their gender identity while at school.

According to CNN, the bill, which the state assembly passed overwhelmingly in January, now goes to the desk of Republican Gov. Dennis Daugaard. If he signs it, South Dakota will become the first in the country to pass such legislation against its transgender population.

Republican Rep. Fred Deutsch, the bill's lead sponsor, said the issue was one he has "been praying about" and that it ultimately was a question of privacy.

"I don't really care what team they play on ... the real issue is protecting the privacy of all of our students," he told the Argus Leader in November. "We should respect that privacy, we should respect the right of our sons and daughters to dress privately."

According to the bill, students who identify as transgender and want to use their preferred restroom would have to come armed with a parent or guardian's note. Only then would the student be granted "reasonable accommodation" in the form of a single occupancy or unisex restroom, or the "controlled use" of a faculty facility.

The bill came under withering criticism by transgender rights advocates who declared it detrimental to the mental health of transgender youth.

"LGB youth are four times more likely to attempt suicide as their straight peers. Forty-one percent of transgender and gender non-conforming people have attempted suicide. Forty-one percent compared to 4.6%, the national average," Thomas Christiansen, President of the South Dakota-based Center for Equality, said in a press release issued in January. "This is not because LGBT people are mentally unstable, it's because of intolerance and rejection like we are seeing by our legislature."

And the bill's passage looks like it could be a lock. According to the local Argus Leader, Gov. Daugaard reportedly approves the argument and appears to be leaning toward signing, but has said that he needed more information.

"I have not met a transgender person that I'm aware of," he said at a press conference, the Leader reported.

And, in an effort to remain "objective," wrote the Leader, Daugaard said he doesn't intend to.