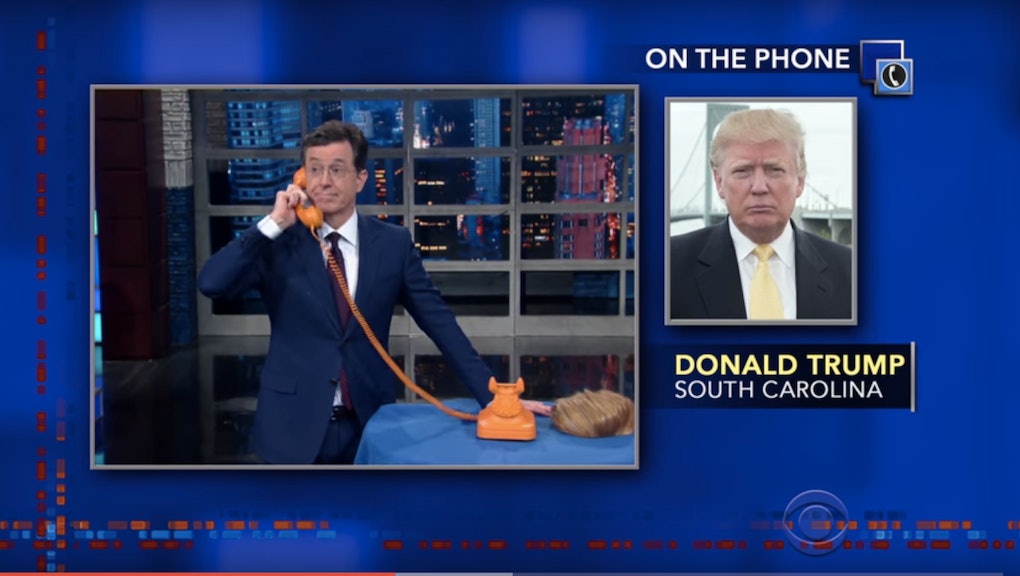 Stephen Colbert Answered the "Trump Phone" and Got an Earful

As is his style, Trump, who is currently campaigning in Colbert's home state of South Carolina, didn't deign to stop by, but phoned it in.

For the occasion, Colbert unveiled the "Trump Phone," a personal line that would exist solely between him and the Donald. "Donald, call me on this phone. It is a line dedicated just to you, and to show that I'm serious, I am willing to split the charges."

It wasn't long before the be-wigged phone rang out — in the most Trumpian fashion.

"Donald Trump. OK, listen, I gotta make sure this is really you, not somebody abusing the Trump phone. Say something only Donald Trump would say," Colbert demanded.

The conversation then pivoted to Trump's campaign in South Carolina and the candidate's seeming inability to curtail what Colbert deemed a "potty mouth."

"Why don't you have a swear jar; every time you say a bad word you put a billion dollars in it," Colbert suggested. Trump laughed. "I think that's a good idea," he said.

The conversation then moved to the unexpected vacancy on the Supreme Court. Trump echoed his comments from the most recent debate, saying he didn't fault President Barack Obama for wanting to move forward, saying he would do the same. He again, however, repeated what he said was the Senate's prerogative to decline to act on its constitutional role.

"The Senate really does, especially for this fairly short period of time, they have a right not to do it, not to vote on it, not to approve it," said Trump.

The segment ended on a lighter note, with Trump, at Colbert's suggestion, exhorting his South Carolina followers to "please vote for me, y'all."

That should do it, Trump.