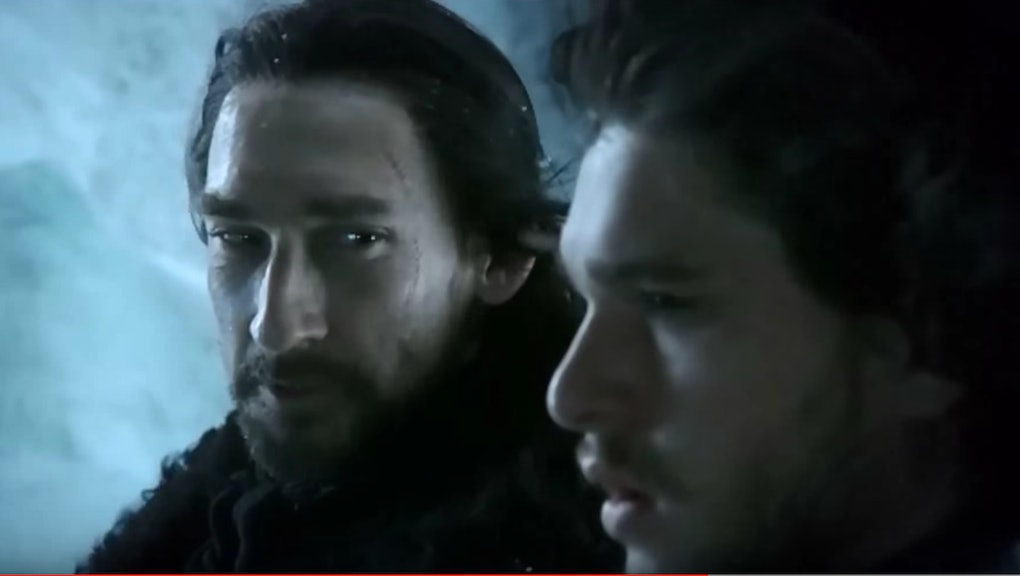 The Biggest Unanswered Questions in 'Game of Thrones'

At the conclusion of the fifth season of Game of Thrones, which corresponds to the end of the fifth book in George R.R. Martin's A Song of Ice and Fire series, fans were left pondering the fate of Jon Snow. Naturally, the most pertinent question raised was whether he was really dead, or if he's coming back in some way. It's an intriguing question, yes, and there will hopefully be definitive answers at some point in season six, which will return in April, and in Martin's sixth book in the seven-part series, though that does not have a release date.

However, the fate of one bastard from the North is just the tip of the iceberg. There are several unanswered questions from Martin's wide-ranging narrative — all of which fans will hope to see resolved in some way by the series' end. Here are some of the most compelling questions yet to be answered.

Read more: 'Game of Thrones' Season 6 Photos Confirm Who Is Alive — And Maybe Who's Not

What happened to Benjen Stark? As if the Starks haven't had it hard enough, Ned Stark's brother, Benjen, has been missing in action since the first season (and first book). He's the first ranger of the Night's Watch when Jon Snow joins, but he leaves to look for a missing ranger from the near-outset of the series.

In the HBO show, he only appears in three episodes before leaving the Wall to search for the missing ranger. Like the books, he's never seen again. There are theories about what happened to Benjen, but the most prevalent one — that he is Coldhands, a book-only character that helps Bran Stark and his cadre beyond the Wall, and appears to be a dead former member of the Night's Watch — was shot down by Martin himself.

Any other theories on Benjen's fate don't have the same merits and evidence, such as Benjen being Daario Naharis — Daenerys Targaryen's latest love interest. This makes less sense on the show, because the characters are played by separate actors (in Daario's case, he had two different actors). In the meantime, there really is no indication as to whether Benjen is alive, dead or something in between. What's more, in the show, Olly actually used Benjen's fate as a means to lure Jon into being stabbed to death by his brothers in the Night's Watch.

Which of the Cleganes are alive? The fates of Sandor and Gregor Clegane – the Hound and the Mountain, respectively – are points of curious debate. Based on the end of season five, it's clearer what happened to the Mountain in King's Landing, with what can only be a reanimated, Frankenstein-esque form of him carrying Cersei away after her incredibly humiliating walk of atonement.

Meanwhile, the Hound's fate is more suspect — particularly in the show. In both the TV series and the books, he is left for dead by Arya Stark, though for different reasons. Yet doesn't die on the screen or the page. A popular theory among book readers is that he's alive and is at a place called the Quiet Isle, having survived his seemingly mortal wounds and left behind his old life of violence.

What supports this notion is that the Hound's actor, Rory McCann, has been spotted in Belfast, according to a report from Watchers on the Wall (though it is through an anonymous source). Saving the Hound would also set up the "Cleganebowl," a highly popular theory among fans that would pit the two brothers against one another in a future trial by combat between Cersei and the Faith.

Considering the Mountain disfigured the Hound's face by sticking it against a fire when they were children, the two certainly have bad blood. Another trial by combat for the Mountain — this time against his brother — would be both extremely entertaining and aligned with the Clegane family's narrative.

Where is Gendry? Another character whose fate is left for debate is Gendry, presumably the last remaining bastard of Robert Baratheon. He's last seen at the end of season three, when Ser Davos provides him with a row boat to escape from Dragonstone before he's sacrificed by Melisandre to the Lord of Light.

Gendry admits that he doesn't know how to swim, so Davos implores that he doesn't fall off. The actor who plays Gendry, Joe Dempsie, jokingly implied in a tweet in 2014 that he's still rowing his boat.

Yet entering season six, Gendry's fate is still up in the air. He is the last remaining Baratheon in direct relation to Robert (if you assume Stannis did die at the end of season six), so he has some importance in that regard. Whether he'll appear again at any point in the show — or in the subsequent books — will continue to be debated by fans, as the evidence doesn't lean one way or the other.

Who is Jon Snow's mother? A prevalent question — and a lingering question Martin clearly holds with great importance — is of Jon Snow's parentage. Fans' long-held belief is that Jon is not Ned Stark's bastard — something the show and the book series have spouted as truth repeatedly. He is still a Stark, but the son of Ned's sister Lyanna and Prince Rhaegar Targaryen.

The events leading up to Jon's birth happen years before the series begins, and it's always been a point of contention for fans. Ned is, after all, emphasized to be an extremely honorable man — sometimes to a fault — and having a bastard son with another woman would go against his reputation. Furthermore, Lyanna's final words before she dies are "promise me, Ned," as she lies in a "bed of blood," which can be interpreted as a complication with childbirth. She could have asked Ned to raise her son as his own.

While Jon is killed at the end of season five — and in the fifth book — the many theories and rumors suggesting he is still alive, in turn, keep this notion alive. After all, it would be odd for Martin to emphasize the importance of Jon's parentage simply to kill him off.

For a detailed look at the "R+L=J" theory, check out this explainer by YouTuber Alt Shift X below.

What are the White Walkers' motives? Every major player in Game of Thrones has a motive, whether it's to rule Westeros or avenge family members that were killed. While it's clear for some factions and houses more than others, the White Walkers may have the simplest end game — or the most complex, depending on the theory.

One extensive Reddit theory stipulates that the White Walkers (called the Others in the books – this terminology is used in the post) are headed toward the Wall because an ancient pact between themselves and mankind was broken. The theory also adds that Jon Snow's purpose, if he is Azor Azai reborn, is to act as the peace broker between the White Walkers and the humans, perhaps through a marriage with one of their own (as did the Night's King).

Given the plethora of multilayered characters in Martin's expansive world, it's quite possible that the White Walkers are more than just a mindless horde of ice zombies bent on destruction.

What are the Faceless Men up to, and who do they side with? Among the Game of Thrones mythology, gods and religions, the Faceless Men and their "Many-Faced God" are one of the most mysterious groups. While it's quite clear that the Faceless Men are, essentially, a death cult, it's unclear what their long-term motives are in the show.

Of course, their signature catchphrase, Valar morghulis, translates to "All men must die." If it is to be taken somewhat literally — as some theories point out — that could align them with the undead White Walkers, whether they're cognizant of it or not. One theory suggests that they are aware, and that they have acquired a dragon egg from Euron Greyjoy to destroy The Wall, which has its own inherent magical powers.

In any case, spending as much time with the Faceless Men as the show has, it's evident there has to be some kind of end game for the group — even if it is just as simple as "all men must die."