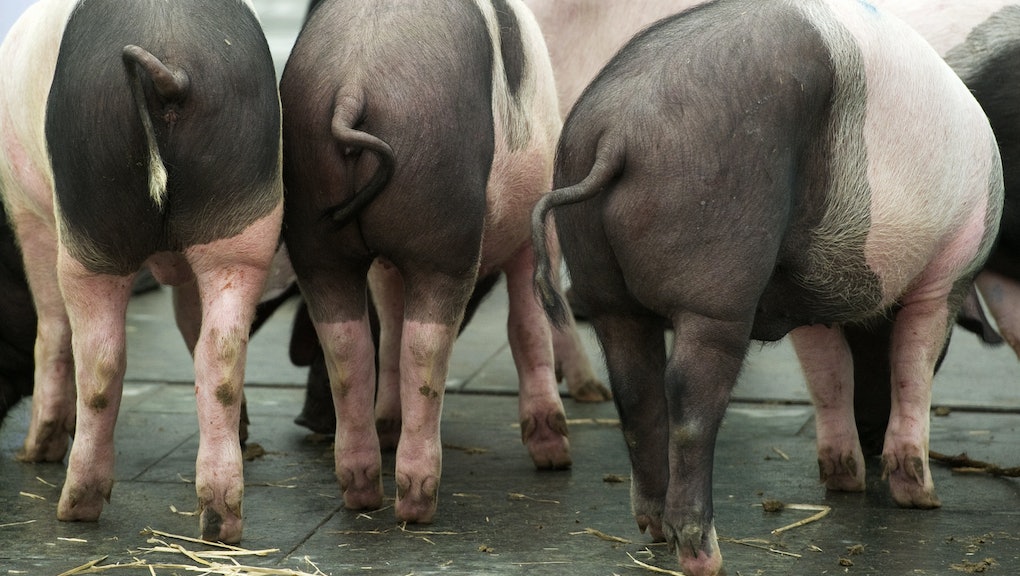 Good News for Bacon Fans: Pigs of the Future Are Genetically Modified to Avoid Infection

Biologists from the University of Missouri, Kansas State University and Genus PLC were able to make pigs resistant to porcine reproductive and respiratory syndrome, a virus that causes illness, death and miscarriage, and costs North American livestock producers $600 million per year.

To make it happen, the team used CRISPR/Cas-9, a gene-editing technique currently sweeping the biotechnology world with unprecedented results in agriculture and oncology. As Christopher Tuggle, a professor of molecular genetics at Iowa State University explained to Mic, the edit targets a protein in the pigs that acts as a point of entry for the virus into the cell. By making it inert (also called knocking out), the virus can't get into the cell to replicate.

During the study, even when pigs infected with PRRS interacted with the uninfected ones, nothing happened, because the virus literally couldn't get in. If PRRS is the Big Bad Wolf, the new gene edit was, in effect, the cellular version of a brick house.

For the researchers, the breakthrough means pigs won't get sick from a disease that has been running amok on farms since the 1980s. But for you at home? The change might be in your refrigerator.

"If we can get approval to grow these animals, it's possible that the decrease in production costs, in veterinary costs and waste, could be passed on to the consumer," Tuggle told Mic. "I think producers are interested in the debate because it will keep animals healthier, have less damage to the animals and less suffering that comes from disease. An argument can be made that it'll make the pig population much safer."

The question now is if farmers will be willing to adopt a genetically edited version of pigs, and if people will buy them. A concern Tuggle points out is that consumers will be hesitant about any food that had its DNA changed. But considering the positive results that have already been shown in editing plant genomes, if a tiny edit like turning off a virus-receiving cell means better and cheaper bacon, swaying the skeptical masses shouldn't be too hard.