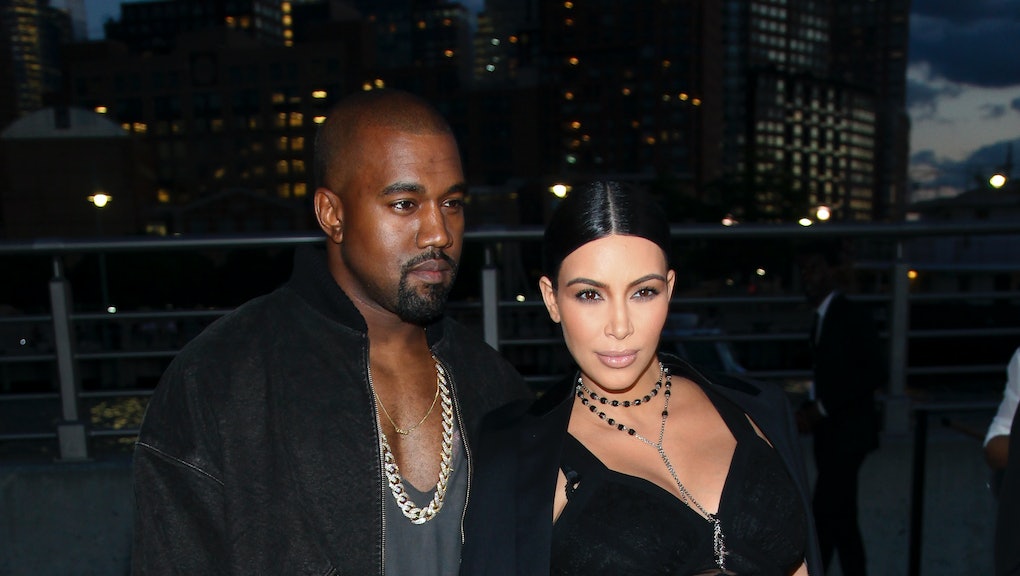 Kanye West's latest album The Life of Pablo is 18 tracks of pure Yeezy in all his greatness: spiritual, emotional, flawed and somewhat all over the place. There's one theme which seems to transcend over the album, however, and that's Kim Kardashian West.

Though West does touch on some topics typically unexplored throughout his albums, including his relationship with his father, the challenges of being a black celebrity and police brutality across America, his reality star wife is the focus of several verses throughout T.L.O.P. and the Chicago rapper's elusive love life is detailed at length.

West details many of his recent accomplishments in "Highlights," the seventh and possibly most upbeat track on T.L.O.P. Yeezy comically lambasts Ray J, who once appeared in a sex tape with West's wife before she was one of the most famous personalities in the world.

"I bet me and Ray J would be friends/ If we ain't love the same bitch/ Yeah, he might have hit it first/ Only problem is I'm rich"

The song is essentially an ode to his own accomplishments, which include marrying the reality star and ultimately joining what some consider to be the most famous family in America, the Kardashians.

"21 Grammys, superstar family/ We the new Jacksons, I'm all about that action/ I'm about that Farrakhan, life is a marathon/ I'ma shift the paradigm, I'ma turn up every time"

In "FML [Fuck My Life]," West's emotional collaboration with the Weeknd, the rapper gets candid with fans about his relationship with Kardashian West, as well as the struggles he occasionally faces remaining loyal to her in a world of fame and fortune. Yeezy doesn't hold back any details in "FML," which might also mean "For My Lady," as West raps in his first verse on the track. The rapper describes a yelling match him and his wife were involved in while visiting a Giuseppe store, but ultimately reminds himself how hard he's worked to get the wife of his dreams.

"I been waiting for a minute/ For my, lady/ So I can't jeopardize that for one of these hoes/ I been living without limits/ As far as my business/ I'm the only one that's in control/ I been feeling all I've given/ For my, children/ I will die for those I love"

West further raps about his commitment to Kardashian West, saying he'd leave behind all of the flings and casual romances he typically partakes in so he can stay with his wife.

"God, I'm willing/ To make this my mission /Give up the women/ Before I lose half of what I own/ I been thinking about my vision/ Pour out my feelings/ Revealing the layers to my soul, my soul."

His infatuation with Kim K. is a narrative which continues over the course of the entire album. Even in "30 Hours," a rap about one of Yeezy's former girlfriends, West admits his former beau was the "best of all time," but only "at the time" he was with her.

If The Life Of Pablo is meant to chronicle a life story, it's about West's relationship with his wife, and perhaps rightfully so. The reality star and social media queen has taken a huge role in releasing West's latest album, polling Twitter users which title they'd prefer for the album name, promoting its Madison Square Garden release across her social profiles and announcing the releases of West's "Good Music Friday" tracks.