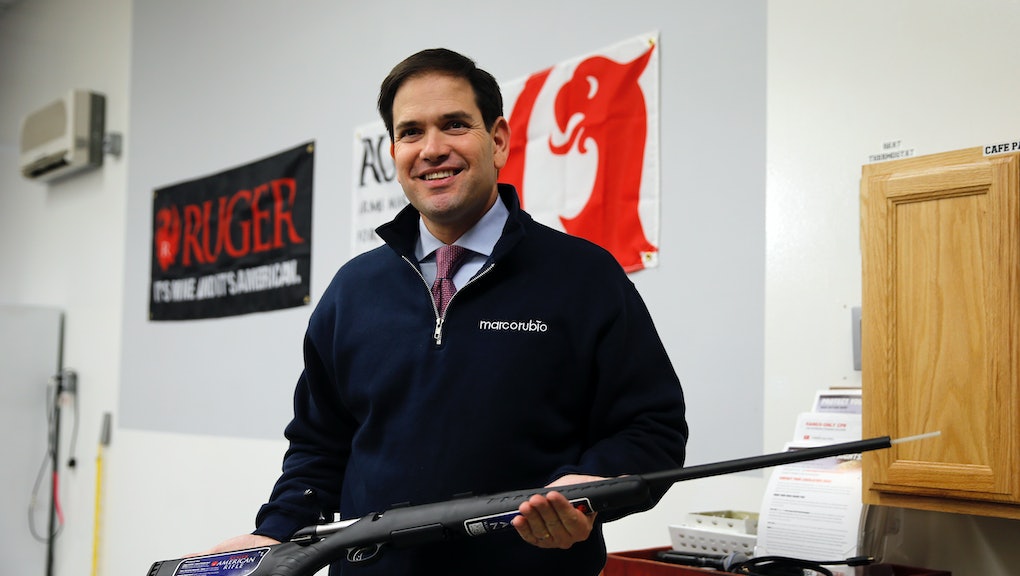 Former Florida Gov. Jeb Bush has a huge gun — and this, of course, is of crucial importance to his 2016 campaign. On Tuesday, the GOP presidential candidate attempted to assert his manliness and/or patriotism, tweeting a picture of a hefty firearm with the caption "America." It was a first for the former Florida governor, who hadn't owned a gun before Tuesday. That's part of what made this move look like such a transparent bid for approval and the macho vote.

Read more: More Americans Have Died in 53 Years of Gun Deaths Than in All US Wars Combined

Bush's primary foe in this election — the bigger, some might say brawnier political personality, real estate mogul Donald Trump — has frequently alleged that Bush isn't strong enough to be the nation's commander-in-chief. Take, for example, this exchange from the Jan. 14 GOP debate:

"We need someone with a steady hand being president of the United States," Bush said.

"And we don't need a weak person being president of the United States," Trump replied. "That is what we would get if it were Jeb."

One of the Bush campaign's greatest obstacles is the perception that its candidate is weak, thus the gun tweet. But the desire to be seen as the party's biggest gun advocate is universal among Republican candidates. Indeed, the Jan. 14 debate focused almost exclusively on gun control and protection of the Second Amendment.

The gun is a much-revered object in the eyes of Bush's party: The right to buy, carry and keep firearms is one that each GOP hopeful has fiercely defended. Indeed, at times the race seems to devolve into a pissing contest of sorts — an scramble to out-do one another in gun-love intensity.

Florida Sen. Marco Rubio also went and got himself a gun in the course of his campaign — on Christmas Eve, in fact. His reason? As he explained to CBS, he needed it to protect his family against the looming threat of terrorist attack.

"I'm a strong supporter of the Second Amendment," Rubio said. "I have a right to protect my family if someone were to come after us. In fact, if ISIS were to visit us, or our communities, at any moment, the last line of defense between ISIS and my family is the ability that I have to protect my family from them, or from a criminal, or anyone else who seeks to do us harm."

He also has a concealed-carry permit — as does Trump. "I have a permit, which is very unusual in New York," he told CNBC in October. "It's a permit to carry. I carry on occasion, sometimes a lot. I like to be unpredictable." Comforting.

And don't even get Texas Sen. Ted Cruz started on guns. Cruz loves guns, and he's stirring up fears that the death of Supreme Court Justice Antonin Scalia might be the demise of the Second Amendment — if the wrong candidate gets elected.

Former gun control advocate and New Jersey Gov. Chris Christie seemed to have developed a case of amnesia in the course of his presidential run, having forgotten that gun control — the desire to keep his state's assault weapons ban in place — was the driving force behind his 1993 senatorial campaign. He has since changed his mind; now that he's dropped out, he may well change it back.

Is it a manliness thing, or is it a legitimate fear of imminent attack? Do these men always feel as if they're in mortal peril, or do they just like talking about how big their guns are? Whatever the reason, seems unlikely that a GOP candidate could take the White House without declaring their love for Bush's "America."