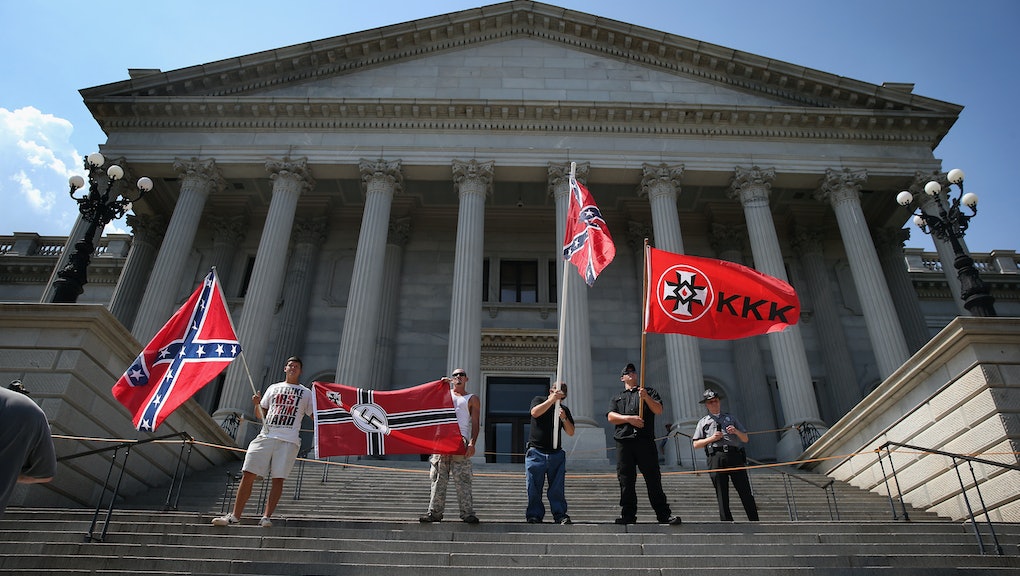 The number of hate groups in the United States rose dramatically in 2015, according to an annual report released by the Southern Poverty Law Center on Wednesday.

2015 saw several deadly terrorist attacks on U.S. soil — including on the Department of Public Health in San Bernardino, California; a historically black church in Charleston, South Carolina; and at a Planned Parenthood clinic in Colorado Springs, Colorado.

But while these incidents were grabbing headlines, organized hate groups in cities, towns and rural communities across the country were quietly forming and building up memberships.

SPLC data shows a 14% rise in "the number of groups on the American radical right" nationwide between 2014 and 2015 — an increase of 108 organizations, the sharpest spike since 1999-2000. The five U.S. states that house the most hate groups today are, in order: Texas, California, Florida, Tennessee and Pennsylvania.

The election of President Barack Obama engendered a rise in the volume of these groups — especially white supremacist and antigovernment organizations — over the several years after he was elected. Between Obama's election in 2008 and 2011, their numbers rose steadily before seeing a decline from 2011 to 2013 and, finally, a significant drop in 2014.

That year, the number of hate groups clocked in at 784 — a 10-year low, according to the SPLC report. But in 2015, it was up again to 892, and the new crop constituted the most diverse array of groups in terms of both race and ideology that's been seen in years.

The most significant increases were seen among Ku Klux Klan groups (from 72 to 190) and so-called "black separatist organizations" (from 113 to 180) — the latter being groups that, unlike racial justice organizations such as Black Lives Matter, channeled their disaffection with the killing of black Americans by espousing anti-Semitic and homophobic rhetoric.

Much of this increase over the years, SPLC contended, can be attributed to racist backlash against the rise of Obama and, more recently, the Black Lives Matter movement and other civil rights advances.

"The bulk of that anger is coming from beleaguered working class and, to a lesser extent, middle-class white people, especially the less educated — the very same groups that most vociferously support [Republican presidential candidate Donald] Trump," Potok wrote.

There's a lot they aren't happy about. "They are angry over the coming loss of a white majority (predicted for 2043 by the Census Bureau), the falling fortunes of the white working class, worsening income inequality, the rise of left-wing movements like Black Lives Matter, major advances for LGBT people, growing numbers of refugees and undocumented workers, terrorism and more," he added.

An uptick in hate crimes against Muslims also spiked in the wake of San Bernardino, part of a pattern in which Muslim Americans and people mistaken for Muslim Americans — like Sikhs — have been victimized by assailants who blame them for terrorism since 9/11.

More statistics are available in the report, which is available online as part of the latest issue of SPLC's quarterly publication, the Intelligence Report. Just don't read it if you're looking for a sunny outlook on America's future.