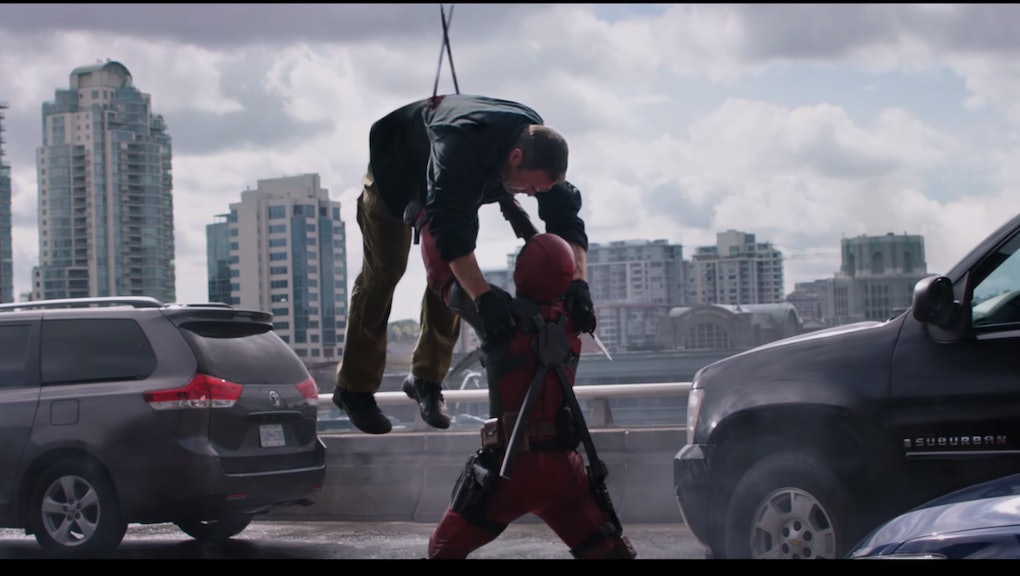 ‘Deadpool’ Could Help Create More R-Rated Marvel Films — Is That a Good Thing?

Nothing encapsulates Valentine's Day weekend like a superhero film in which the titular character swears uncontrollably, masturbates with the aid of a stuffed unicorn and brutally murders henchman in increasingly creative ways.

Yes, Deadpool made its much-anticipated box office debut last weekend, and Marvel Entertainment and 20th Century Fox have already reaped their rewards. Officially, it had the highest-grossing weekend ever for an R-rated film and performed surprisingly well across gender lines.

With Deadpool's success as an R-rated film, Marvel and DC Comics and other superhero franchises may be inspired to create equally raunchy and violent installments. However, it does create the potential for these films to simply follow the formula that worked for Deadpool, with no added original thought.

"Over the next few months, if you pay attention to the trades, you'll see Hollywood misunderstanding the lesson they should be learning with Deadpool," Guardians of the Galaxy director James Gunn said in a post on Facebook. "They'll be green lighting films 'like Deadpool' — but, by that, they won't mean 'good and original' but 'a raunchy superhero film' or 'it breaks the fourth wall.' They'll treat you like you're stupid, which is the one thing Deadpool didn't do."

While the key elements of Deadpool's R-rating (notably the violence, gore and crass humor) could very easily be imitated in other superhero films, Marvel's already demonstrated that it can create mature, more realistic stories on a different medium: Netflix. Daredevil and Jessica Jones should be the example they should follow.

Read more: 'Deadpool' and Ryan Reynolds Have Trolled Their Way Through an Entire Marketing Campaign

The superhero genre in film has seen a surplus of sequels, spinoffs and new franchises that could cause audiences to feel superhero fatigue. Deadpool is aware of this, and thus constantly ridicules its own main character — and, broadly, the very idea of a superhero.

"One reason why critics have embraced Deadpool so much is because it seems to speak to our superhero fatigue," Charlie Jane Anders wrote for io9. "Even though this is a totally conventional superhero movie in a lot of ways, it also invites you to giggle at the total self-seriousness and wackness of the genre as a whole."

Yet on television — and on Netflix specifically — the stories are fresh, imaginative and, most importantly, mature. Take Jessica Jones. The titular character, played by Krysten Ritter, does not fit the typical superhero mold. She's crude, an alcoholic and is dealing with intense PTSD. By struggling with these demons, such characteristics make Jones a more relatable, imperfect and inherently human hero.

Similarly, Daredevil, another Marvel venture through Netflix, has darker undertones than other superhero projects, though he falls into a more traditional form than Jones. However, he is neither wholly good nor evil. Instead, he exists as someone New York City demands.

"Matt Murdock is the kind of hero that environment now needs: the first street-level hero willing to get his hands dirty," Kwame Opam wrote for the Verge. "And the blood he and those around him spill is a constant reminder of how morally compromised his part of the city has become. This is what the world is like with superheroes in it. This is how things go too far."

There is no indication that Marvel movies — and more broadly, superhero franchises — will follow Netflix's example. When they have in the past, it's been with the wrong character. Zach Snyder took criticism for his dark depiction of Superman in Man of Steel, since Clark Kent is a character mainly associated with hope. (His symbol literally means hope in his home of Krypton.)

Instead, if we're to believe Gunn's suspicions, superhero franchises will lean toward the example set by Deadpool. Already, rumors are stirring that the next Wolverine standalone film will now be an R-rated venture, even though no Wolverine or X-Men film has rated above PG-13 before.

The fact is that other superhero franchises would likely fail if they use Deadpool as a model for success. The movie is great, and very well-received, but the character is a very unique outlier. You can't transpose his characteristics, such as the self-awareness that he is within a comic book or his sadistic enjoyment of killing bad guys, onto other, traditional superheros without creating a disingenuous hybrid. That is, in part, why Deadpool is such a popular character for comic book readers. No other hero is like him, and he evolved over time with several iterations of the character.

"Even if you don't read Deadpool comics religiously or subscribe to his sense of humor, you can still appreciate the way the character has evolved throughout the years," Alex Abad-Santos wrote for Vox. "That type of evolution for any kind of fictional character — the ability for different writers and artists to interpret the character and push him to be better over a continuous 25-year narrative — is typically only possible in the comic books."

Unfortunately, given Hollywood's obsession with spinoffs, sequels and reboots, we can still expect them to try — and subsequently fail.