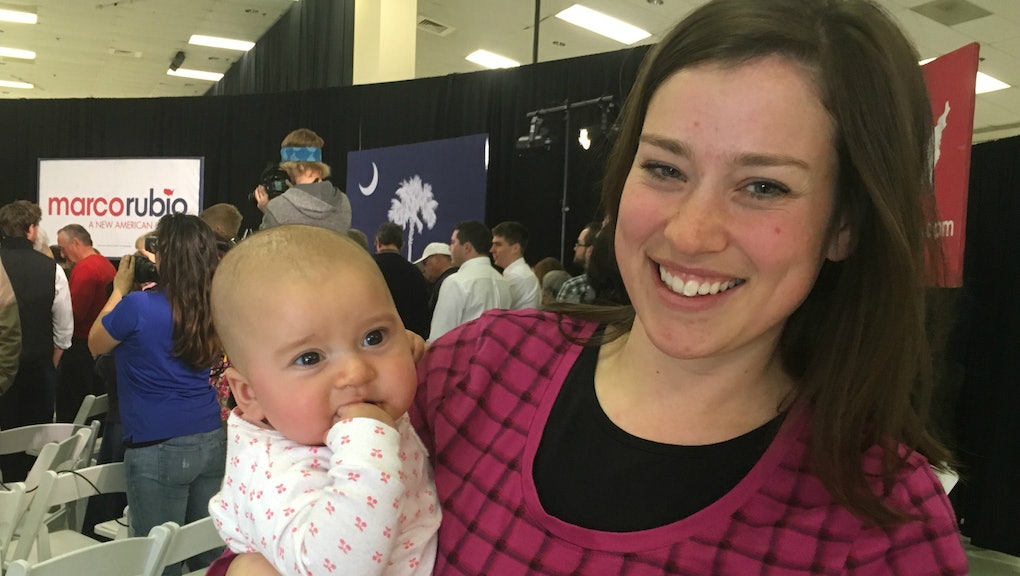 CHARLESTON, S.C. — Pope Francis dropped a bombshell into the already heated Republican presidential primary battle for the support of Christian conservatives on Thursday, saying frontrunner Donald Trump "is not Christian" if he supports building a wall on the Mexico border rather than building the bridges the world needs.

Trump pushed back hard, saying "for a religious leader to question a person's faith is disgraceful."

The pope's foray into the primary battle comes just two days before Republican voters go to the polls, and adds a new dimension to the political fight here in Charleston — known as the "Holy City" for its many churches — and throughout the Palmetto State, where faith-motivated voters could be the candidates' Holy Grail.

South Carolina is a profoundly religious and overwhelmingly Christian place. About 74% of adults here believe in God, 69% say faith is a "very important" part of their lives and 66% pray "at least" daily, according to the Pew Research Center. However, Catholics make up a relatively small portion of Christians in the state — Protestants outnumber Catholics by more than 6 to 1 in South Carolina, according to Pew.

More broadly, long before Pope Francis sent shockwaves through the race with his Thursday remarks, the battle for the hearts of religious voters here presented GOP candidates with a challenge that could test the wisdom of Solomon.

The question: How can the candidates appeal to the most traditional believers while still picking up fresh support from young Christian conservatives whose beliefs are deep, but decidedly different from those of their parents? Conversations with young religious voters across the state this week revealed that faith plays a major role in influencing who they support and why.

One God, many candidates: Ryan Malouff, a conservative-minded 21-year-old senior at the Citadel who is about to receive a commission in the Army, calls himself a "religious man" and says as a Christian, faith is "pretty high up there" on his checklist for choosing a candidate.

"I definitely would prefer a godly man in office," he told Mic ahead of a rally on Monday at which former President George W. Bush campaigned for his brother, former Florida Gov. Jeb Bush, whose campaign has struggled to gain traction here.

"In my life, the more that I focus on my relationship with God, the more wise I've gotten," he said. "I just figure a more spiritual person would probably be wiser in office than someone who's not."

At the same time, Malouff said he is a strong believer in the separation of church and state. While he may not personally believe in abortion or gay marriage, he said the courts have ruled on those issues. His personal distaste for the extremism of the Westboro Baptist Church brand would tend to insulate him from the furthest-right religious appeals.

Malouff, like many South Carolinians, said he expected to choose a candidate at the eleventh hour.

She considers both of them men of faith — a critical quality, to her mind, of a wise leader.

"I feel like they're religious men, and they have a conscience," Bell said at a Rubio rally in Mount Pleasant. "They feel like they're held accountable before God ... That would make the decisions they make much better because they know [their choices] can't be out of selfishness and personal gain, that they are working for something much greater — and God is watching them and will guide them if they ask for His help."

"Having someone who is religious and who will pray — that's huge, because God's the only one who really knows what we need, what kind of decisions need to be made for our country," she told Mic, her infant daughter, Adeline, squealing and cooing in her arms.

"If they are humble men who are willing to do that, they'll go far," she said. "They'll be able to do a great good."

Bell is a member of the Mormon church, a group that has been held up to scrutiny and even scorn by evangelicals.

Not so cut and dry: But just as Christianity itself is not a monolith, religious voters in pivotal South Carolina are not aligning behind a single cause — or candidate.

Polls both locally and nationally show Trump dominating the GOP field in the run-up to the South Carolina primary, and if anyone rivals him on Saturday, they'll have gotten there on more than a wing and a prayer.

Trump has trumpeted that he'll be, among other things, the "greatest jobs president God ever created."

But the twice-divorced, thrice-married real estate mogul has a hazy record of church attendance. He raised eyebrows with a unique description of the sacrament of Holy Communion ("When I drink my little wine – which is about the only wine I drink – and have my little cracker, I guess that's a form of asking for forgiveness") and overall is perhaps not the classic example of a man motivated by religion.

Still, Trump has done and continues to do well among the churchgoing set. A Bloomberg Politics poll released Wednesday showed Trump "dominating the field across virtually all demographic groups, and doing even better than Cruz among those who say they are either very conservative or evangelical Christian."

Past the pulpit: Trump has ridden a wave of anger among the Republican electorate to the top of the polls, and faith-motivated voters may be looking beyond the traditional hot-button "values" issues.

Rep. Mark Sanford, former governor of South Carolina, has been popping up at GOP candidate events with regularity. He told Mic at a Ted Cruz rally aboard the USS Yorktown that, in essence, jobs may be ahead of Job in the minds of an electorate worried about its financial future.

"I would argue that it's economic populism that's really driving the train," Sanford said.

Among Trump's supporters, there are those who say there's no dissonance between Trump's lifestyle and the path of faith.

Mark Flood, 29, a North Charleston webmaster who identifies as a Christian, said where other candidates may pound the rhetorical pulpit, Trump is out there raising money for veterans' groups.

"Instead of saying he's a Christian, he shows it by actions," Flood said, pointing to stories of Trump's helping save a Georgia farm from foreclosure after the owner committed suicide, as well as the candidate's operation of a philanthropic family foundation.

Cruz's Christian crusade: Cruz, the Texas senator running second to Trump in South Carolina, speaks perhaps most often of religion on the stump, and it's paid off in the past.

He effectively mobilized evangelical voters — as part of a superior ground game — to catapult him to a win in the Iowa caucuses, as did Mike Huckabee before him in 2008 and Rick Santorum in 2012.

On the trail, in debates and on the airwaves in South Carolina, he's aggressively played up Trump's past stated support for abortion rights and Planned Parenthood and used the Supreme Court vacancy created by the Saturday death of Justice Antonin Scalia as a clarion call to conservatives.

Cruz, as in the case of other GOP candidates, has also appealed to evangelical voters by voicing support for Israel as both the cradle of Judeo-Christian values and America's staunchest democratic ally in the Middle East during a period of extreme volatility.

It's a time-tested strategy for Republicans making a play for religious voters — and not just Christians.

What remains to be seen is whether Cruz's strategy for gleaning the support of Christian conservatives will pay off as it did in the Midwest, or whether Trump and Rubio — the latter newly endorsed by ultra-popular Gov. Nikki Haley and positioning himself as a unifying candidate — will erode his base.

Love thy neighbor: Some young Palmetto Staters who don't care for the fire and brimstone politics of candidates like Trump or Cruz are cleaving to the campaign of Bush — the early A-lister of the 2016 Republican primary cycle who has seen his prospects dwindle.

Charlestonian Felicia Haynes, a 27-year-old military employee, said her own deep Christian faith "helps keep me grounded [and] do the right thing," and she believes it would do the same for Bush if he were to win his long shot presidential bid.

Haynes calls Bush, who was baptized in the Episcopalian church and converted to his wife's Catholicism about 20 years ago, a "wholesome man" whose religion "keeps him honest" — and whose efforts to stay above the primary mudslinging she finds admirable.

Unjoyful noise unto the Lord: Suffice it to say the GOP hasn't cornered the market on finding the intersection of faith and politics.

Pastor Thomas Dixon showed up at a Bernie Sanders rally in Charleston Tuesday. He told Mic that while he's not naming his primary pick yet, he'll certainly go with a Democrat — and feels the GOP is distorting the intent of the Scriptures for its own purposes.

Dixon left behind the brick-and-mortar ministry, he said, for "the hood," where he works as an organizer through a group he co-founded called The Coalition — People United to Take Back Our Community.

He's also president of the Carolina Alliance for Fair Employment, and as former addict who's very open about telling a stranger he's been "as low as you can get and as high as you can get in America," he said he feels strongly about those who feel they are without sin and can cast the first stone in a politico-religious context.

Where he feels Republicans spin Christianity as "judgmental" sometimes, "It's actually a religion of love — and what they don't seem to understand is that the mandate for us [as Christians] is to love God first and to love our neighbor second. Nowhere does it say we're called to fix them," he told Mic.

Understanding and tolerance is what's needed — notably, he said, in a city that bears the scars of the horrific murders at Mother Emanuel Church.

"When you're just as messed up as the next person, who are you to try to fix somebody else?" Dixon asked. "And that's what Jesus meant when he said, 'Judge not, because in the manner that you judge, so shall you be judged.'"

South Carolina Republicans will get the opportunity to judge their candidates Saturday.