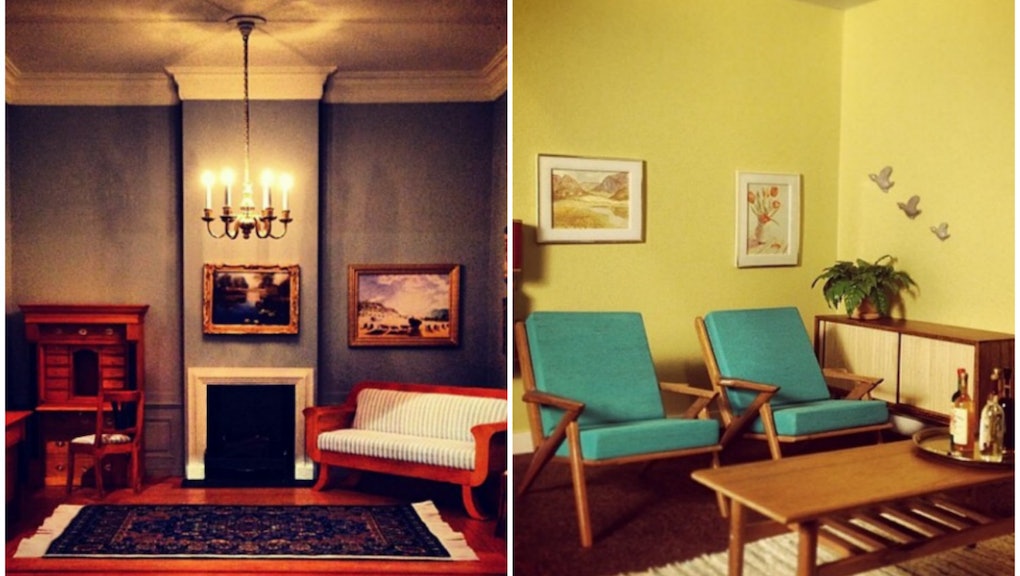 Aggravated by Your Own Tiny Apartment? Make a Beautiful Dollhouse to Enjoy Vicariously

Living in a small apartment is a rite of passage, especially for young people who flock to big cities. And what we lose when we are forced to live in makeshift shoeboxes with paper-thin walls are things like oversized couches or armoires... or basically anything really nice that our grandparents had in their houses.

So Emily Boutard, a 28-year-old architecture student living in Melbourne, decided to find an escape — a very cute and very mesmerizing escape.

Totally something you could imagine living in, right? Well, here's a cat for scale:

Is Boutard the world's most talented miniature interior designer? Maybe. She admits that this level of precision and sophistication when it comes to designing what is essentially several parts of the world's chicest dollhouse comes from a lifelong obsession with dollhouse furniture and miniature things.

"At first it was just a bit of fun, but over the years it evolved into more of an obsession, and now I do it almost full-time," she told Mic. "I began building architectural models and dollhouses when I was in my teens, but it was not until I was in university that I began making them seriously."

How seriously? Boutard says each piece, from a fire place to a chair, typically takes a few hours to finalize, though not a lot of money.

"A little chest of drawers probably about $3," she said. "If I use hardware like hinges or castors I will buy them ready made, so about $15. That's why this work is so great. Minimal cost upfront, and maximum return: The value you create is totally about your own skill."

Ironically, her work has been affected because of how small her own real-life apartment is.

"My apartment is pretty small, so I keep most of my tiny things on top of cupboards and book shelves," she said. "I used to make miniatures in a larger scale (1:12), which is the traditional dollhouse scale you would have seen. Now though, I have gone smaller, and make them at half that size (1:24)."

Recently, her work — which can be seen on her Instagram and website, and also recently on BuzzFeed — has veered in a more Victorian direction, but she's also done quite a bit of more contemporary work, with pieces that look like they could be straight out of a CB2 catalogue.

Boutard says the obsession that she had early on (which many others certainly share) can be traced back to a few things, including wanting to "reclaim a childhood desire that was never fulfilled, or, explore fresh or classic interior design and decoration."

But there's no doubt something just fun about thinking something is full size and then realizing that that chair you love is, like, 2 inches tall. Especially when, you know, your own apartment is the size of a juice box.

Looks like it's either time to pick up another hobby or shrink ourselves.