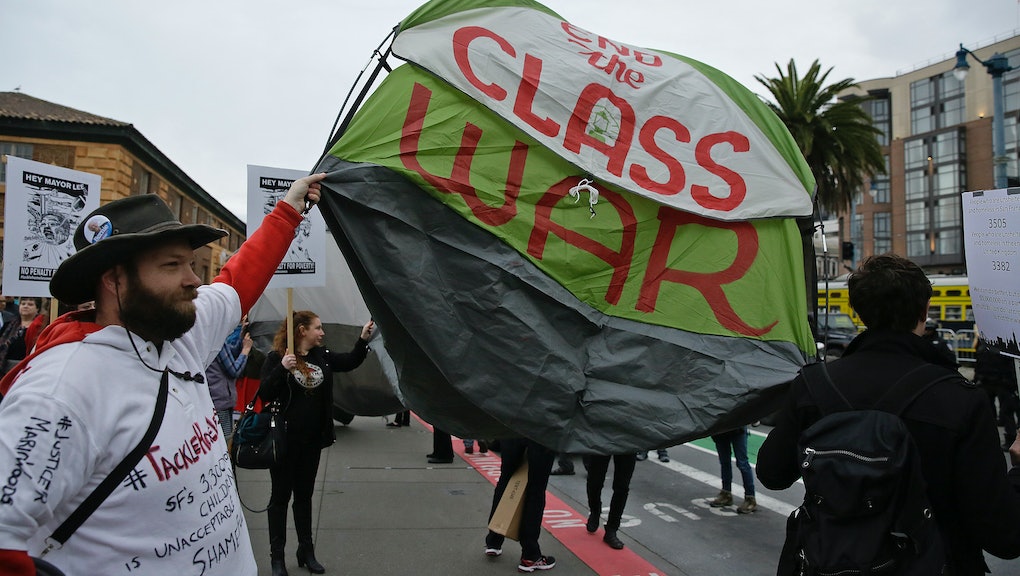 "Out-of-touch" would be an understatement.

A San Francisco tech entrepreneur named Justin Keller has written an open letter to the mayor saying rich people shouldn't have to see homeless "riffraff" on their way to work. This is less than three weeks after San Francisco made headlines for literally herding homeless people off the Embarcadero waterfront to make way for Super Bowl 50.

"[The] reality is, we live in a free market society," wrote Keller, who founded the San Francisco-based web server management system Commando.io. "The wealthy working people have earned their right to live in the city. They went out, got an education, work hard and earned it."

"I shouldn't have to see the pain, struggle and despair of homeless people to and from my way to work every day." —Justin Keller

Keller publicly decided he shouldn't have to see pain, struggle and despair when his family came to visit him over Valentine's Day weekend. According to his letter, which he published Feb. 15, they were forced to witness not one, but three separate incidents where homeless men had the gall to undergo public mental health or substance abuse episodes.

One man even walked into a movie theater, took his shirt off and lay down on the floor near the emergency exit. "My girlfriend was terrified and myself and many people ran out of the theater," Keller wrote. That was Valentine's Day.

The distressed entrepreneur added that his commute to the office has become an unbearable eyesore, filled with people who cannot afford homes and so must live and sleep in tents or on the sidewalk. "Every day, on my way to and from work, I see people sprawled across the sidewalk, tent cities, human feces and the faces of addiction," he wrote. "I've been living in S.F. for over three years, and without a doubt it is the worst it has ever been."

Keller went on to reference Socrates and to warn of an impending revolution. "People on both sides are frustrated, and you can sense the anger. The city needs to tackle this problem head on. It can no longer ignore it and let people do whatever they want in the city."

San Francisco Mayor Ed Lee has yet to publicly respond to his frazzled constituent.

"I've been living in S.F. for over three years, and without a doubt it is the worst it has ever been." — Justin Keller

Keller's letter is particularly egregious in its lack of awareness of the role gentrification has played in the displacement of the city's most vulnerable populations. It is exactly this type of attitude that Bay Area natives are tired of. Gentrification has displaced countless families throughout the region, spurred by an influx of technology companies and their employees with higher buying power than the average family. The median rent price for a one-bedroom apartment in San Francisco hit $3,490 in January — the highest rate in the country.

But, I guess, the real victim is Justin Keller.