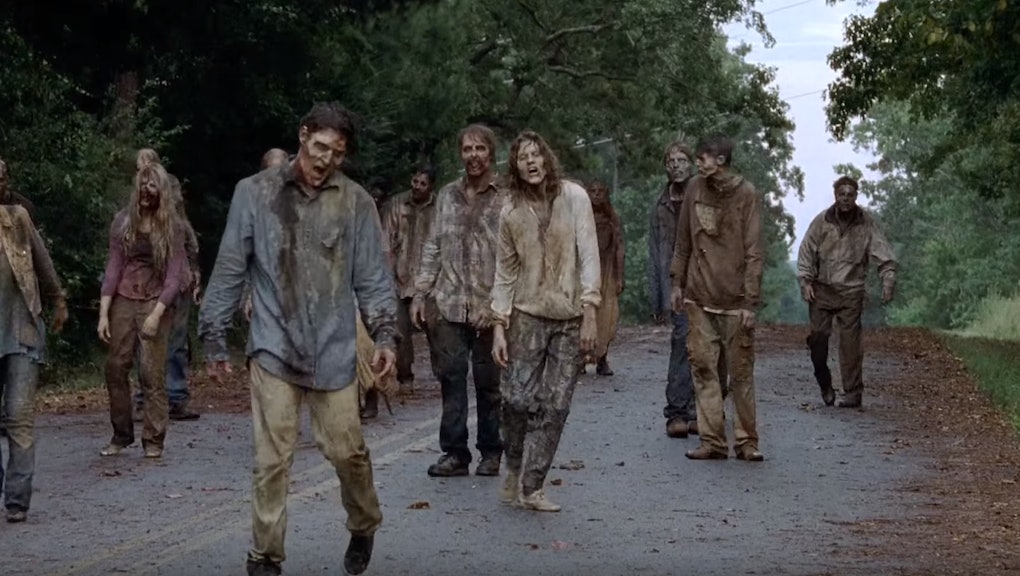 Will ‘The Walking Dead' End With a Cure for the Outbreak? It’s Hard To Tell

The Walking Dead made its anticipated return to AMC over Valentine's Day weekend — fitting, given both enjoy implementing several variations of the color red in promotions. Yet even competing against Valentine's Day special programming and the NBA All-Star Game, the show earned impressive ratings as usual.

However, since the comics and the subsequent show were produced, lingering questions have remained about the origin of the zombie outbreak, and whether the series will discover a cure for stopping others from turning into the undead. Unfortunately for those looking for a cure, and how the post-apocalyptic setting started, the chances of viewers and readers receiving concrete answers are unlikely.

Ultimately, a potential answer lies with The Walking Dead comic book creator (and the show's executive producer) Robert Kirkman. The comics have yet to address the origin of the outbreak — this with over 150 issues released since 2003. The show did touch upon the zombie apocalypse when the group visited the Center for Disease Control and Prevention at the end of season one.

The most impactful part of the CDC visit for the series was when the lone doctor left at the facility tells Rick (Andrew Lincoln) that, aside from being bit by a zombie, a person will turn into a walker if they're killed while the brain is still, essentially, attached to the body. (So if you're shot in the head, you'll stay dead.) It's an important revelation for the show — as everybody discovers they are, quite literally, the "walking dead."

Yet partially because the CDC visit was organic to the show and not the comics, Kirkman has since expressed regret for addressing it at all in the TV series.

"If I had to do it again, I wouldn't have done the CDC episode," Kirkman told the Hollywood Reporter in 2014. "It possibly gave away too much information and was such a big change very early on in the series ... there were things in that episode that I think seem very much not of The Walking Dead world."

For TV viewers, though, the show appeared ready to potentially address a cure for the outbreak when Eugene Porter (Josh McDermitt) was introduced in season four. The group encounters Eugene, Abraham (Michael Cudlitz) and Rosita (Christian Serratos), with the latter two determined to protect him en route to Washington D.C., where Eugene claims he can connect with other scientists to develop a cure.

However, comic book readers already know this to be an elaborate lie (and kudos to those who didn't spoil it for the TV audience). Eugene never does have a cure, and he isn't even a scientist. Rather, he's a self-proclaimed coward who used the concept of a cure to earn the protection of Abraham and Co. In the show, that reveal came in season five.

"We won't see the CDC," Fear the Walking Dead showrunner Dave Erickson told the Hollywood Reporter in August. "When we have two narratives living under the same umbrella mythology, the instinct would be to bring those two stories together and to conflate them. From a creative standpoint, I think we have enough story that we'll be able to ride on for quite some time."

It's not out of the realm of possibility for Kirkman to address a cure at some point in the comics, which could then be transferred into the show's narrative. It is one of several fan theories floating around. Yet given his unwillingness to address the cure in over a decade of producing the graphic novels, coupled with his regret for even introducing these concepts on the TV show, fans shouldn't get their hopes up.